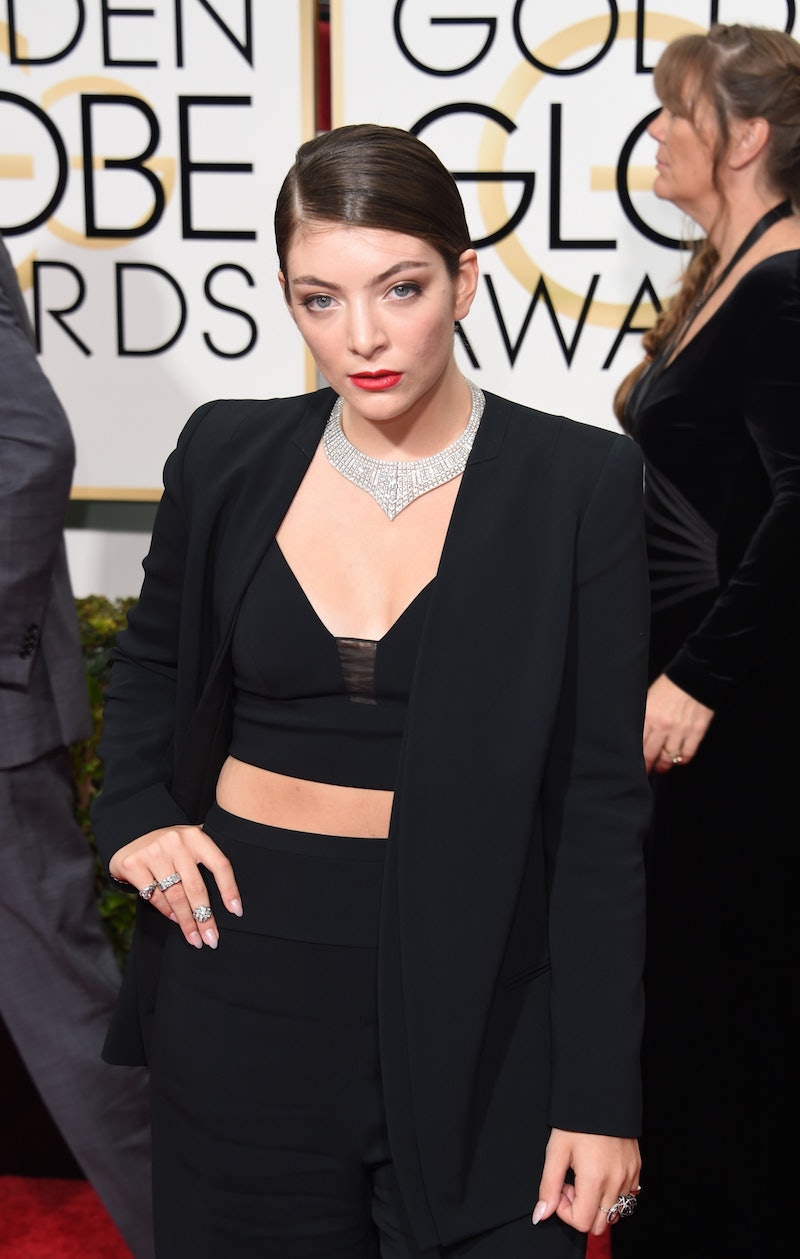 She’ll never be royal, but Lorde's wax figure at Madame Tussaud's means that she’s arrived at a point in her career where she’s deemed important enough to have her likeness recreated and placed on public display for all to admire. Along with this honor comes the expected comparisons of the statue to Lorde’s real-life appearance. The wax replica of the “Yellow Flicker Beat” singer was unveiled on Wednesday in Los Angeles, and thankfully, it looks pretty spot-on. In fact, I’m quite confident that fans won’t be campaigning to have it removed like that totally weird Lucille Ball statue.

Based on the photos that are circulating on Twitter, Lorde’s waxy twin features her signature steely glare, her wavy hair, and is dressed in an outfit that’s similar to her 2015 Golden Globes Stella McCartney suit. And, believe it or not, the statue even manages to duplicate her body language. I don’t know how the artists did it, but I promise I can feel her non-royalty emanating from the photos alone, so I could only imagine how it feels to see it in person. The only thing that could improve it is if it was mobile and pulled off a few of Lorde’s infamous dance moves.

Obviously, I'm digging this Lorde wax figure, but let's take a look at it holds up against some of the previous celebrity wax figures, including the good and the bad.

These statues probably couldn't pass for the real Prince and Duchess but they are still pretty realistic.

This wax figure of a younger Justin Bieber is a little too real. Apparently fans have groped the statue to the point of disintegration. Perhaps that's more of a testament to Beliebers' dedication than the statue's resemblance to the real thing.

This wax figure totally capture's Adele's likeness. I fully expect it to spring to life and start singing "Rolling In the Deep."

I expected this statue to evoke power and triumph and resilience, mixed with a hint of sadness. Fortunately, it doesn't disappoint.

Something about the chiseled face just isn't right. The real-life Biebs wears a noticeable squint. Besides, this wax figure reads more sad singer who wants people to like him than cocky pop star who just knows he's awesome.

This wax figure comes off as more Barbie than Beyoncé. Also, another leotard could've livened it up a little more.

This one actually isn't that bad, but they went all the way wrong with Zayn Malik's face and that is completely unforgivable.

Honestly, I'm kind of the fence about this one, mostly because it doesn't exude the same amount of sexiness. But maybe recreating the allure of one of the sexiest singers around is a little too much to ask from a wax figure.

More like this
Lizzo Scares Herself Meeting Her Madame Tussauds Wax Figures In A TikTok Video
By Alyssa Lapid
Beyoncé Just Announced Tour Dates: Here's How To Cuff Tickets To Her 2023 Shows
By Jake Viswanath
Cardi B, Olivia Rodrigo & More Will Present At The 2023 Grammys
By Jake Viswanath
Jameela Jamil Defends Sam Smith After Trolls Body-Shamed Them
By Jake Viswanath
Get Even More From Bustle — Sign Up For The Newsletter
From hair trends to relationship advice, our daily newsletter has everything you need to sound like a person who’s on TikTok, even if you aren’t.