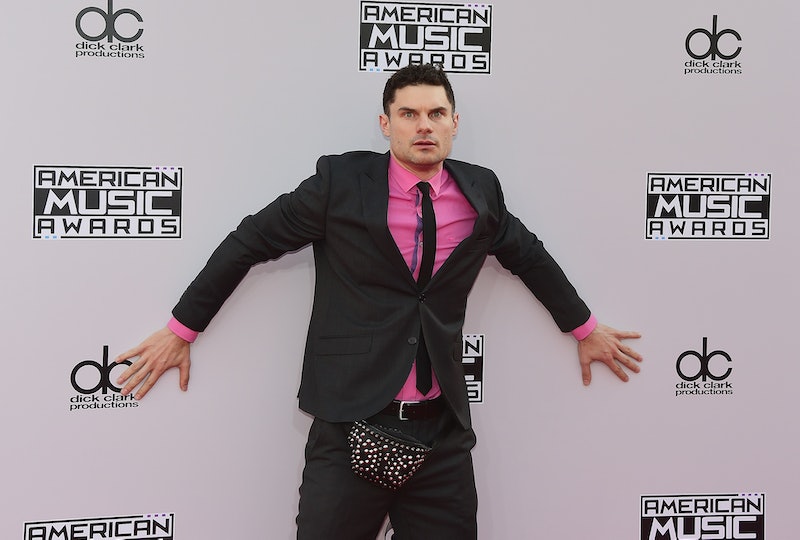 Pitch Perfect 2 hath arrived, and it's bigger, better and more "aca-awesome" than ever (as the kids might say). As a fan of Pitch Perfect, (how could I not be? I have two ears and a heart, don't I?), I've been waiting for this day for a long time — and if you've already seen the second installment of the a cappella sensation, you're probably still on a high like I am. Also, you were probably enamored and confused by Das Sound Machine, the German rival a cappella group that, spoiler alert, the Bellas have to compete against on an International stage. Das Sound Machine are an a cappella goth group, which just works because that somehow seems singularly and distinctly German. But, while Pitch Perfect 2 might be your first introduction to Das Sound Machine, you might have found yourself sort of recognizing the lead guy in Das Sound Machine. As you know, in the film, the fearless leader is named Pieter Krämer — but, IRL, his name is actually Flula Borg, and if he looks familiar to you, that's actually because he's kind of a big deal on YouTube.

Yep — Flula Borg. The man who portrays Pieter Krämer himself is, in reality, a very goofy DJ from Germany, and, also, a YouTube star — apecifically for his amazingly strange AutoTune series where he covers famous songs in his car (many times with the help of his mother and father, and many times with the help of celebrity guests). If that's not pitch perfect, I don't know what is.

But wait, there's more! If you take a trip over to Flula's website (try saying Flula Borg dot com 10 times fast — seriously, it's fun), you'll see that some people really are just exuberant about life — him included. The website reads: "I make music and also I love you!" and, this amazing description of his music:

My Music is like a Hamster who has been fed some Magic Juice. The Hamster is looking strange in the Eyes, yes, which is probable from the Juice; and the People are saying, ‘Dance, Hamster! Dance from your Hamster Legs!’…And now, a Secret: I am the Hamster.

More like this
Taylor Swift Calls Dwayne Johnson "The Man" After Revealing New "Taylor's Version" Song
By Jake Viswanath
Yes, You Do Know The Song From The 'Black Panther: Wakanda Forever' Trailer
By El Hunt
Everything You Need To Know About ‘Black Panther: Wakanda Forever’
By Bustle Editors and Radhika Menon
Jennifer Coolidge Needs 'Legally Blonde 3' To Happen So She Stops Getting Hot Dog Jokes
By Jake Viswanath
Get Even More From Bustle — Sign Up For The Newsletter