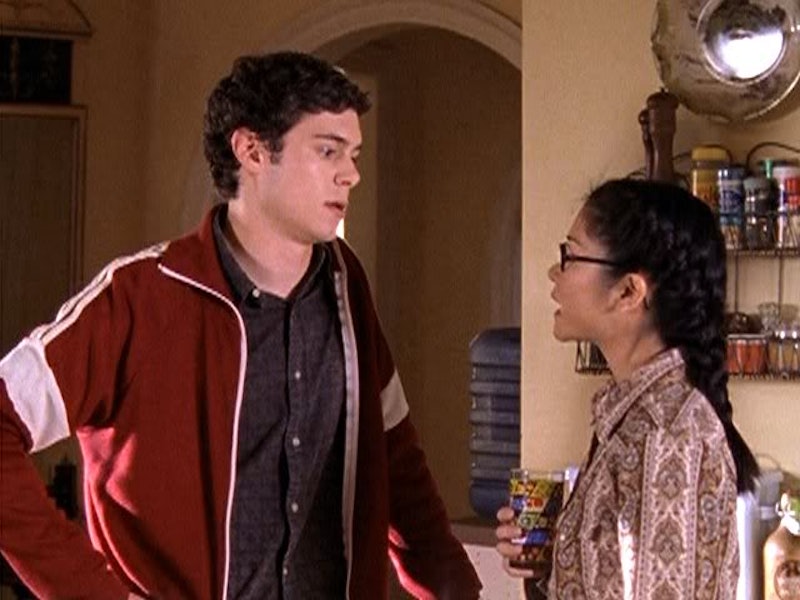 It's a fact that fans know very well: Gilmore Girls had more than its share of iconic couples. Luke and Lorelai, Jess and Rory, Jackson and Sookie, Richard and Emily — Lane and Dave Rygalski. I know, I know: Lane's relationship with Dave wasn't the one that ultimately prevailed her love life, but I honestly believe that it should have. After all, Lane's romantic struggles were a recurring theme throughout the series. Her mother, Mrs. Kim, wanted Lane to marry a nice Korean boy, but Lane wanted something else entirely — and it wasn't until Dave came along that she figured out what that something was. After the two got together, even more adorableness followed: There were band practices, stolen kisses, tofu egg salad, and so much more. Lane and Dave were beyond adorable, and I believe they should have grown old together and told their children the funny story of the wacky marriage jug misunderstanding.

Sadly, in the show, Dave went to college out west, and Lane ended up marrying the sweet Zack. She had twins not long after, and their marriage was by no means an unhappy one. But! As a diehard Lane and Dave shipper, I'm completely convinced that these two were the superior couple — and here are a few reasons why.

1. They Both Knew Some Things Are Sacred

The first time Dave and Lane met, they instantly bonded over the injustice of bands switching out their lead singers. Their adorable music geek moment was just the beginning of a beautiful relationship.

2. There Was A Love Song In Their Future

I bet it sounded something like a Matt & Kim song.

3. Dave Spent Thanksgiving Playing Hymns For Mrs. Kim, Just So He Could Be With Lane

He wasn't even bothered by the epic amount of guitar playing, sans break. He even bragged about his callouses! How is that guy not a keeper?

4. Their First Kiss Was Magical

It is crazy rare for a first kiss to be both romantic and full of chemistry, but Lane and Dave's was epic as first kisses go. Theirs was the first kiss of two people who should have spent the rest of their lives smushing their faces together.

5. Dave Never Would Have Never Let Lane Quit The Band

Dave fought for Lane to be part of the band right from the start. They both shared musical dreams, and he never would have let Lane give up on hers.

6. Lane Found A Way To Channel Her Passion When She Met Dave

Lane spent so much time hiding her passions from her mother. She tucked everything from CDs to makeup under her floorboards. When Dave came into Lane's life she started opening up and showing her mother little pieces of who she was. Dave never pushed her to do anything she didn't want to do, it was just the act of having him in her life that led Lane to start exploring her personality more openly.

Mrs. Kim was a tough woman. She rarely ever approved of the boys Lane liked, but Dave totally won her over. He read The Bible in one night, and composed an epic speech about why Mrs. Kim should let him date her daughter. It was an amazing gesture that even Mrs. Kim could not ignore.

8. Lane Let Herself Dream Bigger When She Was With Dave

After Dave left and Lane went to Christian college, she started spiraling. It was a rough time for her, because she went from feeling like anything was possible to settling. Her dreams were so much bigger when Dave was around. If he had stayed (or she had headed out to California), it seems safe to say she only would have continued to flourish.

9. They Were Each Other's First Loves — And They Got It Right The First Time

Not all first loves are built to last. Dave and Lane? They definitely were. Not only did they bring out the best in each other, but they were also comfortable together right from the beginning. If the dream is to find someone who gets you on every level and whose face you never get sick of looking at, then Dave and Lane could have had it all.