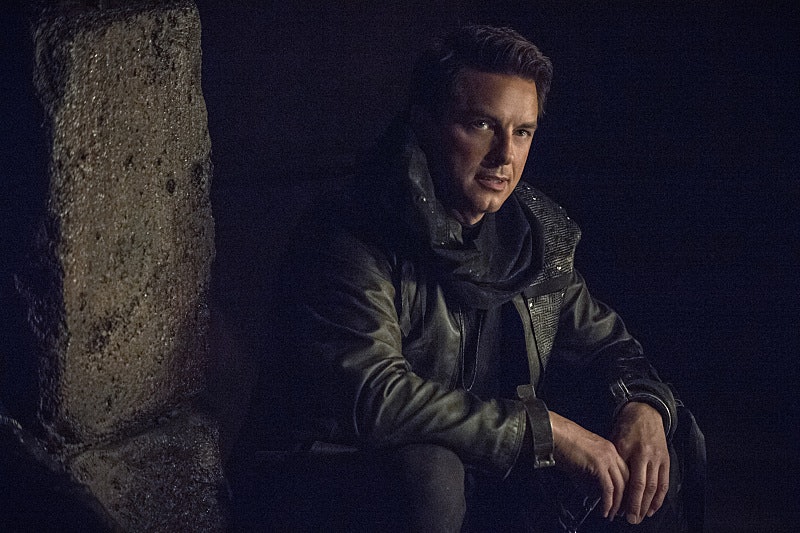 It just wouldn't be an Arrow season finale without at least three huge twists and a cliffhanger, and the final episode of Season 3 certainly delivered on all fronts. After Oliver defeated Ra's al Ghul and decided to (gasp!) retire from being the Arrow in favor of a shot at happiness with Felicity, Malcolm Merlyn came to say goodbye — but more than words were exchanged. Oliver slipped the Dark Archer a very important ring, and the end of the episode confirmed what it meant: Malcolm is now Ra's al Ghul on Arrow. Sure, it's preferable to Oliver being forced into the job, but Malcolm ascending to this very powerful position spells trouble for Team Arrow in Season 4 — especially since Oliver apparently won't be there to lead them.

If this season of Arrow has taught us anything, it's that the League Of Assassins operates on a very strict set of rules, and is unparalleled in its deadly potential. Malcolm has always resided in a moral grey area, and made some horrible decisions that cost innocent people their lives — let's not forget that before Sara, there was "the undertaking." Similarly, the League seems to always believe it's doing good, but tends to ignore the harmful consequences of its actions and not even consider the moral implications. Basically, Malcolm and the League are a match made in heaven, which means there is hell ahead for everyone else on Arrow.

However, there is one potential positive effect from Malcolm becoming Ra's: the return of Oliver as the Arrow. The show is called Arrow, after all, he can only give up that side of himself for so long. If anything is enough to warrant Oliver picking up his bow again it's Malcolm using his new power for evil. Diggle, Felicity, Laurel, and Thea (who's finally become Speedy) make a great team, but they were never in the League. Like Oliver told them in the finale, only people who have been in the League can truly understand it, so when Malcolm inevitably turns back into a villain in Arrow Season 4, only the Arrow will be able to stop him.