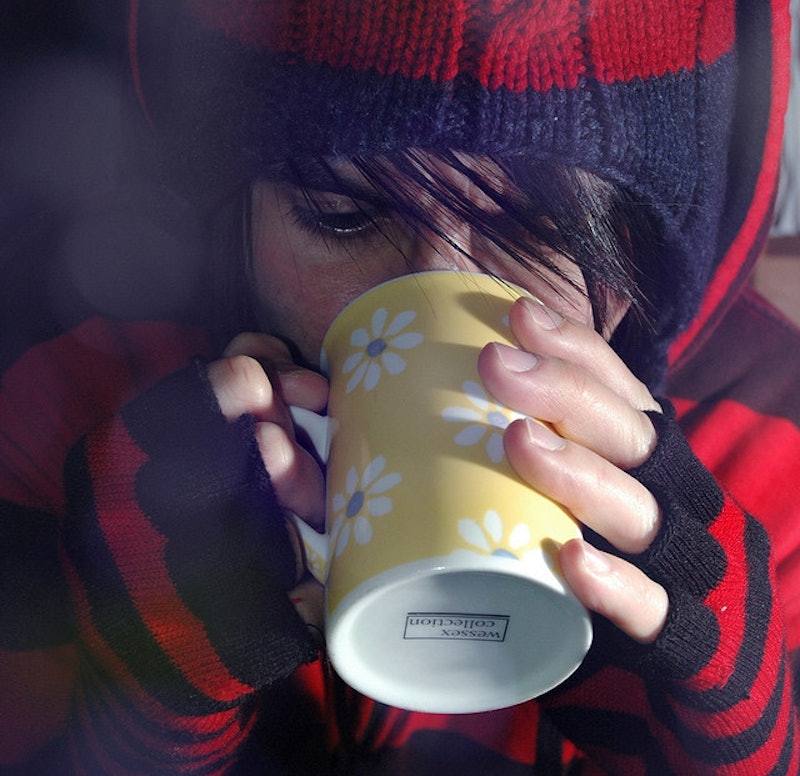 Is it summer everywhere except your cubicle? Are you reading this post while buried deep beneath a pile of sweaters, blankets, and random pieces of insulation material that you found in the storage closet at work, because your office is too cold? Well, join the (goosebump-covered) club — a 2009 study of government employees found that 60 percent of those surveyed had problem with the temperature of their office, and another survey found that one in 10 U.S. office workers have fought with a coworker over control of the thermostat.

Millions of dollars and tons of research go into determining the best indoor climate for office workers — so why does the temperature of our workplaces often feel better suited for Arctic waterfowl than human life? According to the U.S. Department of Labor, offices temperatures are supposed to fall between 68 and 76 degrees throughout the year; other research shows that office building temperatures are typically set between 70 and 74 degrees (where are those offices? We'd like to find them). Those temperatures are selected to prevent heat exhaustion and other physical problems — but they come with a lot of baggage, including who they're designed to keep comfortable.

But before you throw in the frozen towel, here are six more reasons that your office should be warmer. Send them to your boss and fight the (AC) power.

A Cornell University study on temperature and office worker accuracy found that offices where the temperature was a balmy 77 degrees enjoyed an employee error rate of only 10 percent; but in offices where the temperature was kept at a frostier 68 degrees, the error rate rose to 25 percent. Those 77 degree offices also had about 150 percent more worker output than the offices were workers had to spend all their time messing around with their space heaters. And this wasn't just because cold workers were mentally distracted — an overly cold office makes a physical impact on us, tensing our muscles and leaving us more likely to make typos or other physical mistakes.

All these typos and searches for auxillary sweaters aren't just annoying — they cost businesses actual cash. That same Cornell study found that in cooler offices, employees who felt chilly each cost their employers 10 percent more per hour in labor costs than they would if they felt comfortable. (Not to mention, we'd guess, the AC bill.)

Women comprise roughly 51 percent of the U.S. labor force. And women are more likely to feel cold, due to the way estrogen can restrict our blood flow to our extremities and our tendency to have less muscle mass than our male coworkers. So why aren't office temperatures set up to suit our needs?

Most office temperatures regulations are based on a building code devised by the American Society of Heating, Refrigerating and Air-Conditioning Engineers, using research conducted in the U.S. in the '60s and '70s — back when offices were likely to be filled with men in full business suits. In fact, engineers have a specific unit of measurement that they use when trying to calculate the temperature for a building, called the "Clo" — a unit that correlates exactly to the warmth and coverage provided by a full business suit.

As I'm sure you can see even from deep within your fortress of Snuggies, buildings are no longer exclusively the domain of men in full business suits. Even women dressing for a conservative office environment are less likely to be wearing a full business suit with pants than their male coworkers, simply because dresses and skirt suits are also options which might keep them cooler on their summer commute. And women at workplaces with looser dress codes are almost guaranteed to be exposing more skin than their male coworkers in summer months — it's a social convention of women's fashion, one that female employees are unintentionally punished for engaging with.

According to Cornell University design professor Alan Hedge, speaking to the New York Times, the ideal office temperature for productivity is actually 72 to 79 degrees — as much as a 10 degree jump from the temperature maintained in many of our offices. Every degree under that has the potential to waste our time as we embark on yet another sweater hunt or trip to get a warming cup of tea.

You know how when it's too cold at work, you're like "Ugh, this freezing office is making me want to murder?" Well, it wouldn't necessarily hold up in court, but there is some evidence that cold offices alienate us from each other.

A study reported in the journal Science noted that when office temperatures were kept lower, employees were more likely to view their coworkers as uncaring and ungenerous. And a nip in the air doesn't only impact how we view others — when we're cold, we tend to feel lonelier and more isolated (not ideal when you're working with five coworkers on a project that's due tomorrow morning).

6. Cold Offices Are Based On A Flawed Design

OK, cold office pushers — you may have had counterpoints prepared for all the previous items on this list ("What about all the employee costs incurred by me having to change my sweat-soaked shirt twice a day?"), and arguments about how hot and cool offices are really just a matter of opinion and perception. But there is one (very) cold, hard fact that accounts for the pervasive chill in most office buildings: heating and cooling systems are generally designed for offices with 100 percent occupancy.

Since almost no offices are functioning at full occupancy, but cooling systems are programmed as if they were, the systems are blasting us with more cool air than we actually need, compensating for imaginary heat created by electronics and human bodies that just aren't present. Most office heating and cooling systems are also designed for older types of electronics, which gave off more heat — so if your office has switched over to more energy-efficient and cooler LED lights, odds are, no one told your office cooling vents about it.

So don't feel like you have to sit there, helpless and wearing a scarf in July. Fight the power (or at least, the air conditioner).

More like this
25 Inspiring Quotes From Black Women To Celebrate Black History Month
By Kyli Rodriguez-Cayro and JR Thorpe
These Are The Fastest Electric Kettles You Can Buy
By Margeaux Baulch Klein
24 History-Making Black Women You Probably Didn't Learn About In School
By Ayana Lage and JR Thorpe
The 12 Best Winter Candles
By Jenny White
Get Even More From Bustle — Sign Up For The Newsletter
From hair trends to relationship advice, our daily newsletter has everything you need to sound like a person who’s on TikTok, even if you aren’t.