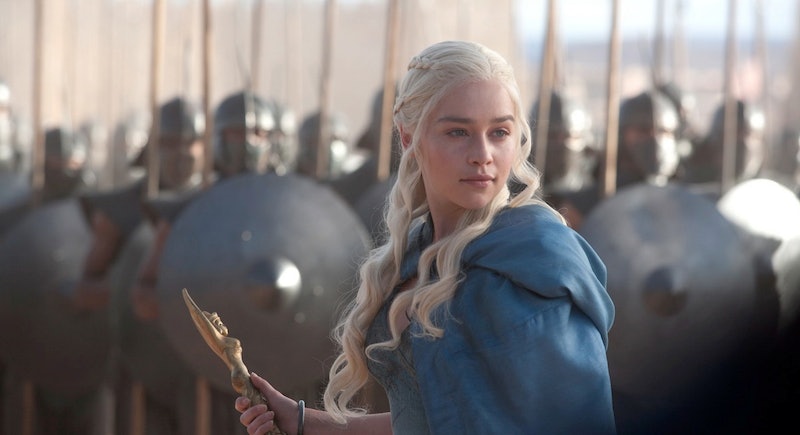 There are a lot of reasons to love HBO's Game of Thrones: Jon Snow, Jon Snow's luscious locks, all the cute little direwolves, Tyrion Lannister, DRAGONS — just to name a few. However, none make a more compelling reason that this little white-haired, blue-eyed Khaleesi up here, Daenerys Targaryen. Not only did she rise from being an unwilling wife to the leader of a nomadic warrior group, to being the leader of said group and a whole ton of men who gladly laid down their life to serve in her army, but she's the also the goddamn mother to three nearly full-grown DRAGONS. If you need more proof that this girl is badass, ya crazy.

But seriously — Daenerys; evolution from the meek girl she is in the beginning of the series (when her slimy older brother trades her to Khal Drogo in exchange for an army of 40,000 men, the JERK), into the strong, badass leader she proved herself to be at the close of season three has been one of the most enjoyable to watch on the show, mainly because of all the feminist undertones woven into her storyline. The whole feminism ideology as it is today may not exist yet in her world and time, but Dany still manages to consistently pioneer a lot of the basic ideas in the movement without even knowing it. For example:

She took charge of her own sexual gratification

In the beginning of the series, we meet Daenerys just as her gross brother, Viserys, is trading her to the leader of the Dothraki people, Khal Drogo, in exchange for an army of 40,000 men to help him win back what he believes is rightfully his: The Iron Throne. Dany clearly wants no part of this marriage, but, used to listening to everything her brother says, goes through with the deal without so much as saying one word about how she's really not into this shit. Even when she meets Khal Drogo and finds him to be a large, muscular, intimidating man who doesn't speak the common tongue, she's afraid — but she still says nothing.

Their relationship begins majorly fucked up, with Dany afraid of him and Khal Drogo used to just making women bend over so he can use them as his own personal fucktoy. Eventually, Dany grows bolder, and begins to take charge in the bedroom so that he's not treating her as an object, but instead a real, sensual human being who knows what she wants in the bedroom. She stops him as he bends her over and turns around to tell him she wants to look him in the face as they have sex, then she straddles him — and just like that, effectively shifts the power dynamic so she's the one calling the shots, literally and figuratively. She could have remained as she was, keeping her mouth shut to avoid problems, but instead she chose to demand respect and sexual gratification because she knew she deserved it.

She demands everyone call her by her proper title

Look, there are a lot of people who would probably call this a bitch move, but those are the people you should absolutely stay away from, because they don't know what they're talking about. In a line that's now become pretty infamous from the series, Dany specifies that she is not a queen, but instead a khaleesi, which is the Dothraki title for wife of the khal. Khaleesi, it is explained to her, can either be used to describe a woman allowed to ride alongside the khal, or to describe a woman who is worth less than the khal's horse, because the Dothraki may all share the khaleesi, but they'd never share the khal's horse.

It seems that 'queen' would be a preferable term if you're trying to lead a group of people and demand their respect, but Dany knows this, and she doesn't care. She wants them to call her khaleesi, in the same way modern women have attempted to take back the word "slut" to combat slut-shaming and misogyny — if she's the one using the title and becoming someone the Dothraki people respect, she's effectively changing its connotation and making it into a symbolism of power, not weakness. Just because she's a woman, she won't stand for being seen as anything less than her husband's equal.

She won't take any of your domestic violence shit

In another instance of asserting her power, Dany finally stands up to her gross older brother Viserys, and slaps him when he dares lay a hand on her. "The next time you raise a hand to me will be the last time you have hands," she tells him, as he stares on in shock. OH SHIT. INSERT Z-SNAP FORMATION HERE.

Woman is the best thing you can call someone

Trying to insult Dany? You're going to have to come up with something a lot better than "woman" or "whore" — Dany will just roll her eyes at that, because "insults" like that aren't even worth her time, or her slap.

This is probably what I love about Daenerys most: Not only is she smart, but she understands people. During her ongoing quest to acquire an army and enough ships to travel to King's Landing so she can take back The Iron Throne, Dany comes into contact with a lot of male rulers who she knows will underestimate her ability as a leader just because she's a woman (even if she is one with three nearly full-grown dragons).

Without fail, Dany manages to use this information to her advantage every time, and manages to acquire a ton of gold, an army consisting of 8,000 men, and ships to take her to King's Landing — in the span of maybe a couple of months. Anyone who tries to belittle her just because she's a woman gets a death glare, and occasionally the wrath of her dragons. Now, if only we all had dragons to do the same for us in our daily lives...

A lot of people like to feel bad for Jorah because he's so clearly in love with Daenerys and she doesn't see him as anything more than a friend and trusted advisor. But, in reality, the opposite should be thought: Just because Jorah assists Dany with her goal of winning back The Iron Throne, she is not suddenly obligated to show him affection — this is a messed up way of thinking, and everything that's wrong with the term "friend zone." Dany thankfully knows this, and has no problem putting Jorah in his place when he constantly begs for her romantic interest with wide, hopeful eyes.

Above all, she speaks out about what she wants, and doesn't care for what others might label her as for it

Why not? The men in Westeros do it, and they're not seen as bitches — instead, they're regarded as powerful rulers. Daenerys demands the same respect they have, and has no problem demanding it even in a world that sees women as weak little "birds." Dany is no little girl — she is a khaleesi, Mother of Dragons, and you will regard her as such.

So, there you have it: All the reasons from Game of Thrones (so far) why Daenerys Targaryen is the baddest feminist bitch in all the land. Anyone who disagrees, well...