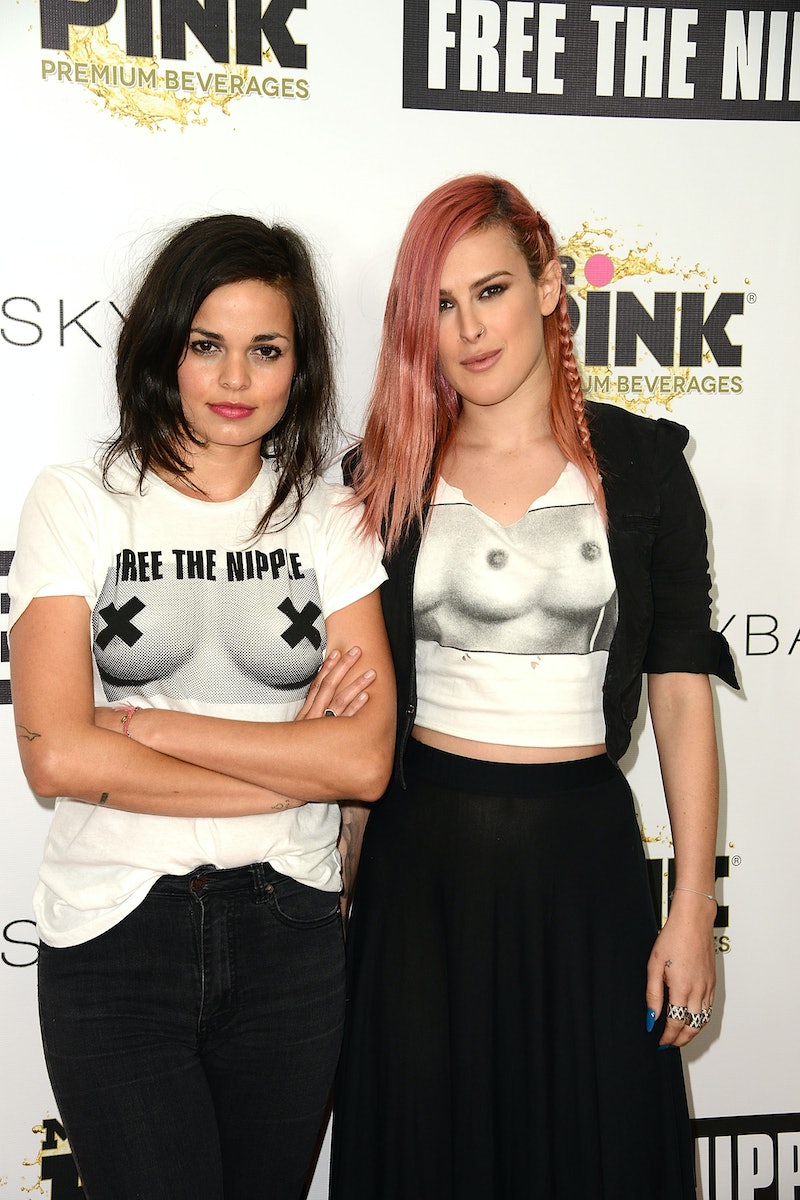 Have you ever noticed how female nipples are constantly being censored by the media? Liz Plank of Mic's Flip the Script has taken note of this trend and did some investigating about why women's nipples are so taboo. After all, isn't it unfair that men's nipples can be put on display without anyone so much as batting an eye, while in some places, women could be arrested for doing the exact same thing — even if it's perfectly legal for women to be topless there?

In order to look into this censorship that extends both online and off, Plank met with #FreetheNipple activist Lina Esco, who is leading the charge on a movement that is seeking to desexualize and decriminalize women's nipples. "The nipple has been hidden for so long in American media," Esco said, which prompted her to start making her documentary film, Free the Nipple. "I wanted women to go topless in New York City (where it's legal to do so, by the way) to challenge the censorship laws for equality." She realized that getting women to go topless was an even more challenging task than she anticipated, which is what sparked the social movement and media campaign that has come before the film's release. #FreetheNipple has since gone viral, with celebrities like Rumer Willis and Miley Cyrus speaking out with the hashtag on their social media profiles. (That's Esco with Willis up top.)

Esco said that while the movement is meant to be playful, being controversial is the only way to create real change around this issue. "There is no way the wheels would be turning unless something was going to spark it, something controversial, and that was Free the Nipple," she observed.

While Esco represents one side of this coin, how do average men on the street feel about nipples? The two women took to the streets of Los Angeles in order to find out.

Here are some of the face-palm worthy things these men said:

Plank asked this man a follow-up question that seemed perfectly appropriate: Does he stare at men's nipples, too? "No, definitely not," he responded. So I guess it's only female nipples that are worthy of staring. It's amazing how double standards work.

This man felt that women shouldn't be able to show their nipples but men should, because "it's just different." Plank pointed out that men and women do indeed have the same anatomy, to which he responded by saying that breasts contain fat. In case he wasn't aware, men have fatty tissue around their nipples, too, but are still permitted to be topless. What gives?

As you can see by these justifications for female nipple coverage, the #FreetheNipple movement is absolutely necessary. But, did you know that it wasn't so long ago that men weren't aloud to take their shirts off? If you want to learn more about the history of the topless nipple in America, watch the full episode of Flip the Script. Be warned that this is NSFW!

More like this
Beyoncé & Madonna’s “Break My Soul” Remix Honors A Group Of Black Icons
By Stephanie Topacio Long
TikTok’s #NapkinChallenge Is The Chaotic Good You’ve Been Missing
By Sophia Moore
I Tried The $20 TikTok Viral Oishii Strawberries — Here's What I Thought
By Sophie Hanson
What Does POV Mean On TikTok? The Popular Acronym, Explained
By Emma Carey
Get Even More From Bustle — Sign Up For The Newsletter