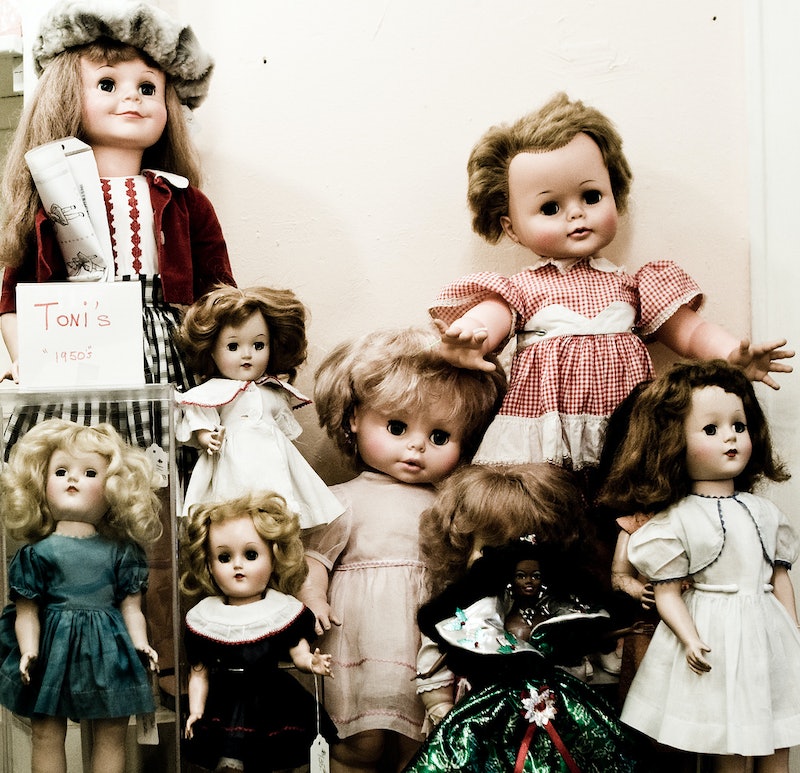 So remember that story about Thomas Edison's talking dolls from earlier this week? You know, the really creepy ones? Well, it jogged my memory something fierce with regards to all the creepy talking dolls of my childhood. Seriously, you guys — the technology may have improved considerably during the century following Edison Phonograph Doll's release and subsequent failure, but that didn't make the toys any less terrifying. Isn't that a great Throwback Thursday topic? I thought so, too. Why yes, I'm slightly bizarre; why do you ask?

Although talking dolls obviously existed long before the '90s, they seemed to have hit some sort of peak during that decade. Pretty much every doll released then had some sort of gimmick — and since doll speaking technology had finally moved beyond the pullstring, chatty little mannequins began popping up left and right. You know what I really wonder, though? Whether or not anyone bothered to check with the target audience about whether or not they wanted talking toys first. I mean, yeah, they were cool — but they were also all kinds of terrifying, especially after they started to degrade.

The creepiness of dolls in general all goes back to what's called the uncanny valley — the point at which we get creeped out by something because it looks mostly human, but not quite right — which is why I think some of the later iterations of these toys got more cartoonish over time (like Baby Alive, for example). But with these toys in particular, my brain always goes in a very specific direction: Sure, they enabled the children who played with them to hone their blossoming parenting skills by pretending to care for something alive… but what if they actually were alive? And what if they did like us using them as playthings?

These seven dolls still haunt my nightmares today. Anyone else?

I have only the vaguest recollections of Telephone Tammy; I didn't own one myself, but when I encountered it while researching this post, the name rang a tiny little bell.

Clearly I had blocked the thing out of memory, though, because it all came flooding back when I watched the commercial for it. And you guys? It is terrifying.

The television spot dates back to 1994, and it stars a young Mila Kunis. In it, our intrepid heroine picks up the doll's pink plastic telephone accessory… and the doll talks back. “Hello. I've been waiting for your call,” she says menacingly. Run, Mila! Save yourself while you still can!

I'll admit to having a soft spot for Teddy Ruxpin. I was always more of a teddy bear person than a doll person; also, my older brother had one, and that the fact that the sole Teddy Ruxpin in our house belonged to my big brother automatically made it the coolest thing ever. In retrospect, though, he was more than a little creepy — kind of like a miniature version of the robots at Chuck E. Cheese (Or Freddy Fazbear's Pizza) — and this monster-themed commercial didn't really do him any favors. He was available for an impressively long time; his first iteration was released in 1985, and his last was just five years ago in 2010.

Interestingly, Teddy wasn't too different from Edison's Phonograph Dolls; instead of a phonograph, he came with a cassette player embedded in his chest cavity. In other news, I can't believe I just used the phrase “chest cavity” in reference to a toy.

Cricket was new to me; I hadn't encountered her until a fateful Google search led me to the somewhat horrifying video seen here. Released in 1986, she operated in a similar fashion to Teddy Ruxpin, with a series of audio cassettes providing her voice. She had a brother named Corky and an older sister named Jill, both also available in talking doll form. Lesson learned: Talking dolls do not age well.

I still maintain that Furby is one of the creepiest things ever to weasel its way into our homes under a the guise of cuteness. I had (perhaps thankfully) aged out of the toy's demographic by the time it hit shelves in 1998 — but seriously, you guys. How did people who had them not worry about waking up in the middle of the night to hear their Furby giggling in the darkness? At least Siri seems to be more than a match for the creature...

Although Baby Alive didn't talk when it debuted in 1973, the toy had acquired a voice by 1992. They're still in production today—and I was completely unprepared for the sheer variety of Baby Alive dolls currently available when I idly wandered over to Amazon to see what the toy looked like now. There's Baby Alive Real Surprises, Baby Alive Make Me Better, Baby Alive Bitsy Burpsy, Baby Alive Learn to Potty, and many, many more. The dolls all look a little more cartoon-y these days, but let's not forget the '90s gem seen here. Also, Baby Alive has a creepypasta. You're welcome — or maybe, I'm sorry.

Although perhaps not as sophisticated as most of the other toys on this list, Baby Sinclair of the '90s puppet-based sitcom Dinosaurs still deserves a place on it. Why? Well… let's just say you should never underestimate the creepfactor of an ancient talking toy with a pullstring.

I don't know about you, but in my book, Chatty Cathy wins the prize for Creepiest Talking Doll in the History of the Universe, largely because of the Twilight Zone episode “Living Doll.” Cathy herself was only available for purchase for a few short years between 1959 and 1965 — but at the height of her popularity, the actress who provided her voice also voiced Talky Tina in that Twilight Zone episode. That's Cathy's commercial up there… and as for Tina? I'll just leave this here:

More like this
Andie From 'How To Lose A Guy In 10 Days' Is A Total Gemini
By Nina Kahn
The Banned 'Friends' Ad Shows Monica As You’ve Never Seen Her Before
By Sam Ramsden
Twitter Is Having A Field Day Over Mr Blobby’s Costume Selling For £62k
By Catharina Cheung
'Friends' Star Maggie Wheeler Offers Support To Matthew Perry After Reading His Memoir
By Alyssa Lapid
Get Even More From Bustle — Sign Up For The Newsletter
From hair trends to relationship advice, our daily newsletter has everything you need to sound like a person who’s on TikTok, even if you aren’t.