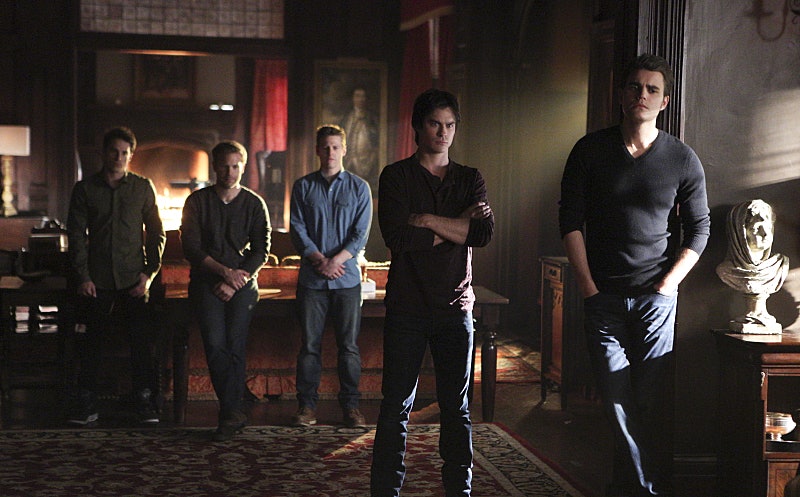 It's always hard saying goodbye to your favorite TV shows for the summer, but I think we can all agree that The Vampire Diaries Season 6 finale will prove to be even more bittersweet than usual given that it also signifies Elena's official departure from the show. (I'm choosing to remain in denial for as long as possible FYI.) Throughout the years, we've come to think of these characters as family, so to see one of our core members leave for good feels like a wooden stake right through the heart. However, being the hardcore TVD fanatic that I am, I'm also extremely excited to see how this massive shakeup will impact the show moving forward, which means The Vampire Diaries Season 7 premiere date cannot come soon enough. [UPDATE: The CW has announced that The Vampire Diaries will premiere on Oct. 8.]

Unfortunately, though we're going to have some time to kill before getting another proper TVD fix. But when we do, we'll get double the amount of vampire drama all in one night as an added bonus. Let me explain… The CW has just released its fall TV schedule, which now has The Vampire Diaries and The Originals airing back-to-back on Thursday nights. (TVD will air at 8 p.m. as per usual, while The Originals will take over Reign's former time slot immediately afterward at 9 p.m.) As of now, no specific dates for the premieres have been released, but at least fans can take solace in knowing that both supernatural dramas will be back in the fall as per usual rather than being bumped to the midseason lineup, a la The 100.

Granted, that still means we're looking at facing roughly 4 months of a TVD-less world. So as a way to help ease our suffering, I thought it would be fun to predict what kind of mischief our Mystic Falls residents will be up to during their summer break.

Damon Will Drink All The Bourbon

Odds are this guy is not going to be happy living in a now Elena-less world. (We feel your pain, my friend!) So what better way is there to cope with your sorrows than by drinking copious amounts of alcohol? It may not be the healthiest choice, but it's certainly the most fun option. Cheers!

Stefan Will Write The Next Great American Novel

Just kidding. He'll simply go back to writing in his journal. (I hope there's an entire excerpt that gets dedicated entirely to his hero hair.) Now that Elena's no longer around to put the "diary" in The Vampire Diaries, it's up to Stefan to carry the torch. And something tells me he'll be an absolute natural at it.

Caroline Will Plan All The Fun Mixers

I don't care if it's summer, spring, winter, or fall — odds are Caroline is planning a party. And just like the host herself, it's bound to be amazing.

Bonnie Will Harness Her Craft

In all likelihood, Bonnie is either practicing magic or almost getting killed as per usual. But personally, I'd like to think that she'll spend at least some of her time this summer perfecting her vampire pancake technique. Damon and Bonnie may no longer be trapped in a '90s prison world together, but that doesn't mean they have to forego the tradition of sharing breakfast together. Plus, Damon's going to need some comfort food to soak up all that alcohol.

Alaric Will Go On His Honeymoon With A Still-Alive Jo

Look, I'm trying to be glass half full here. Work with me.

Before you know it, he starts bringing down supernatural baddies left and right. (Hey, if the writers refuse to give him a decent storyline, I thought I should at least.)

Enzo & Lily Will Run Away Together

Look, I honestly have no idea where this storyline between Enzo and Lily is headed, but even if it's in a romantic direction, that certainly beats watching him plot against Stefan for no good reason. Might as well add a bit of romance into the mix. (Plus, I'm dying to see Damon and Stefan's reaction to this.)

Don't stay away too long, TVD. Thursday nights just won't be the same without you.