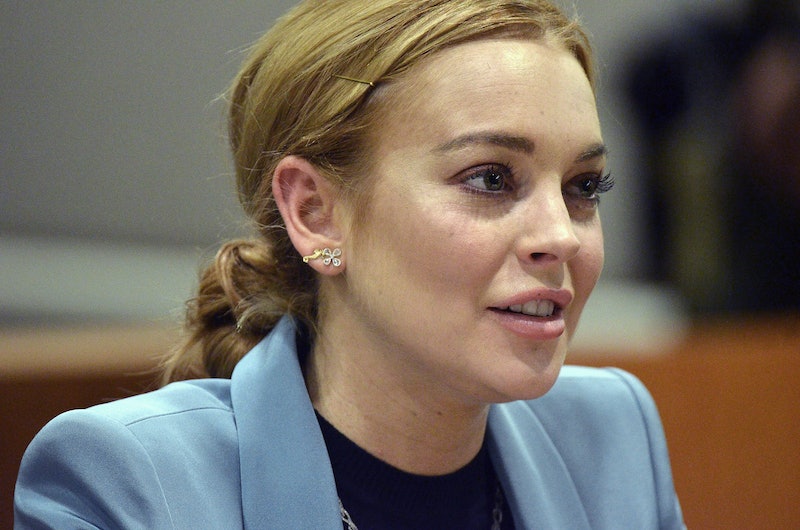 Well, it looks like LiLo is ready to start working on those 125 hours of community service. On Wednesday, Lindsay Lohan started community service at Duffield Children's Center in Brooklyn, New York. Surprisingly, the actress showed up "super early" for her set hours, Ivonne Lopez, director of the daycare center, told reporters. Lopez also gave the following details about Lohan's service to the media: "She has started her community service today. Today she is doing clerical work. She is completing some of the clearances that we need. And she will be here pretty much all day."

During her first day, the actress even reunited with five-year-old Donovan, who she met during her docuseries with Oprah Winfrey. Even though LiLo appears to be dedicated in completing her hours, which were assigned to the actress after she got in a car accident in 2012, some parents of children at the daycare center are not happy with Lohan hanging around their children. (For the record, so far, she's only done about 10 of the required 125 — all of which are due before May 28.)

There are other areas where she can serve her community service. Why should she come to a daycare? Why would I want her around my child? There are so many other things she could do. I was entirely surprised when I received the letter informing parents she was coming.

Linda is also frustrated with the media and paparazzi, which she finds a disruption to her three-year-old son and her own schedule. She said, "They should have asked for our input first because there is all this commotion. I can't bring my son in peace without being asked questions as I walk in and without being harassed."

However, some other parents seem to be OK with Lohan interacting with their children. Tyrique Peoples told ET that "everybody deserves a second chance." He also added, "I don't find anything wrong with it if it betters her... If God can forgive her, we should forgive her." Another parent, Priscilla Monteiro, said she's fine with it: "She seems to have cleaned up her image a lot... We all have rebellious periods and she's had them." "She had that at an early age and everyone was watching her so it's expected. But now as an adult she can think about them and correct them and hopefully have a child someday and set a future for them."

Whether parents are happy or not with Lohan, it doesn't seem to bother the actress who, as you can see above, tweeted she is ready to do some good.

More like this
Lindsay Lohan Is “The Luckiest Woman In The World” After Her Marriage
By Grace Wehniainen
All The Sneaky Lindsay Lohan Movie Easter Eggs In Her New Ad, Explained
By Stephanie Topacio Long
Why Sadie Sink Is Hopeful Max Will Return In Stranger Things Season 5
By Brad Witter
Rihanna Is America's Youngest Self-Made Woman Billionaire, According To 'Forbes'
By Hugh McIntyre
Get Even More From Bustle — Sign Up For The Newsletter