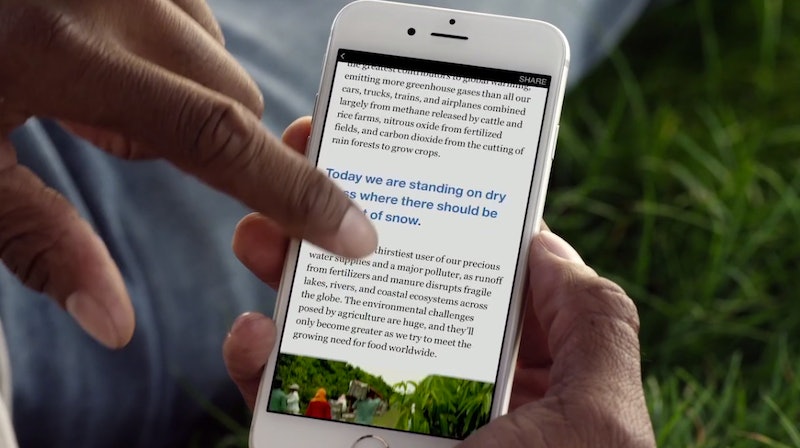 With its users far outnumbering the populations of most all the countries in the world, Facebook is undeniably a force to be reckoned with. In its bid to dominate online publishing, the social media company unveiled its latest partnership with news organizations, dubbed Facebook Instant Articles, which aims to improve your online news reading experience. But how will Facebook Instant Articles change how you read stories online?

Instant Articles is not a separate app from Facebook itself, like last year's Paper app was. Instead, Facebook's partnerships with publishing companies — they already have The New York Times, National Geographic, BuzzFeed, and The Atlantic on board, among others — allows for some of their more interactive articles to be read directly on the Facebook app. So instead of clicking on an article that someone shared and being redirected to The Times' website, its article will appear on the app itself, including a whole host of details that enhance the experience.

Some people in the media industry have expressed their reservations on Facebook Instant Articles, worrying that such partnerships could give Facebook too much control over the media industry. Felix Salmon at Fusion pointed out that it could also drive away news websites' ad revenue, and, more crucially, that news organizations might risk losing the qualities that make their brands unique.

But for the discerning user, what exactly is it about Facebook Instant Articles that will make reading stories online different?

One of the biggest differences you'll find is that articles will load on the app instead of in a web browser, which on average takes eight seconds, almost a lifetime for multitasking users. The new feature will allow articles to load as much as 10 times faster than typical mobile web articles, saving you precious seconds of Internet time.

Articles on Facebook Instant Articles are more interactive, containing videos that play automatically as you scroll through the page.

Those who read Instant Articles can zoom into and tilt photos — a pretty cool detail for the more visually-responsive.

All articles are better with GIFs, IMO.

If you press play on the corner of a photo as you zoom in, you'll get to see both the picture up close and hear the author read the caption — no more scrolling down to look for the photo caption.

For now, the feature is only available on iPhone's Facebook app. Android users, as always, will have to wait, as the company has not yet developed it for the Android Facebook app. Instant Articles that appear on tablets and desktops will similarly be redirected to mobile web pages.

More like this
How To Change Your Instagram Bio
By Emma Carey
Using Your Pet’s Name As A Password? Here’s Why You Might Want To Change It
By Cristina Sanza
What Is A “Softboy?” The TikTok Term & Aesthetic, Explained
By Courtney Young
Why Are TikTokers Slapping Each Other With Tortillas?
By Courtney Young
Get Even More From Bustle — Sign Up For The Newsletter