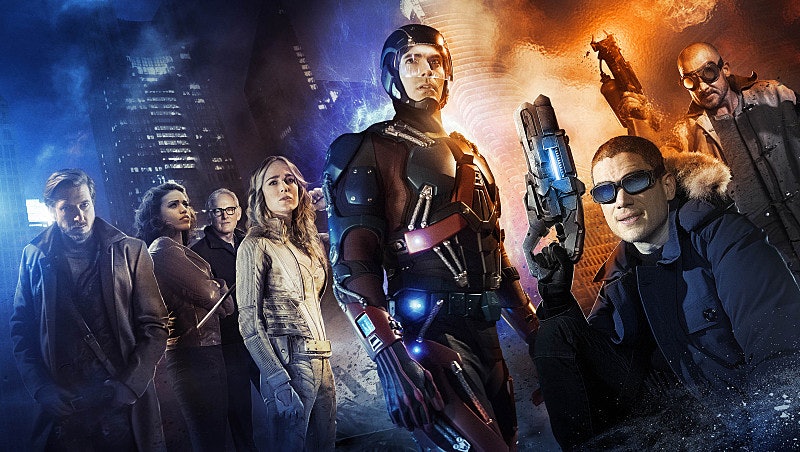 I've got good news and bad new for you. The good news is, The CW has unleashed the first official DC's Legends Of Tomorrow trailer — and It. Looks. Awesome. The bad news? Well, you're going to have to wait awhile to see any more of the new Arrow/The Flash spinoff show, since The CW president Mark Pedowitz confirmed that DC's Legends Of Tomorrow won't be premiering until midseason. Fortunately, the trailer is four minutes long, so you'll only have to watch it about 80,000 times to fill in the time between now and 2016.

Here's the logline for DC's Legends Of Tomorrow , as released by The CW:

When heroes alone are not enough… the world needs legends. Having seen the future, one he will desperately try to prevent from happening, time-traveling rogue Rip Hunter is tasked with assembling a disparate group of both heroes and villains to confront an unstoppable threat — one in which not only is the planet at stake, but all of time itself. Can this ragtag team defeat an immortal threat unlike anything they have ever known?

Now check out the 13 best moments from the action-packed trailer, and then witness the first official footage in all its glory below:

After a brief introduction through the worlds of Oliver Queen and Barry Allen, we get our first money shot of the Legends standing on a rooftop together. "You call this a team?" asks Victor Garber's Dr. Martin Stein skeptically. Not yet, but you will be soon!

Ciara Renée plays this winged superhero who has lived many lives over the course of centuries. Fun fact: Hawkgirl was in fact one of the first costumed female superheroes ever, first appearing in Flash Comics #1 in 1940.

Arrow fans were crushed when Sara Lance, aka The Canary, was killed off early in Season 3. Well, she's about to be resurrected thanks to the Lazarus Pit, and adopt a new alter ego...White Canary.

A Song Of Ice And Fire

Wentworth Miller and Dominic Purcell, both most widely known for their roles on Prison Break, co-star as criminal antiheroes Captain Cold and Heat Wave. Who needs ice zombies and dragons when you have these two on your side?

What Brandon Routh's Ray Palmer lacks in finesse, he makes up for in enthusiasm.

If only he'd had these awesome powers back in his Alias days. Think how many problems he could have solved by just lighting them on fire!

He's from the future. And he makes jokes! What's not to love?

These action sequences hint at the large scale The CW's latest superhero show is aiming for.

These shots of what's presumably a possible future look like they were lifted from that History Channel series Life After People . "This isn't the story of how we vanish... It's the story of what will happen to the world we leave behind."

Canary In A Coal Mine

The climax of the trailer is an extended glimpse at an epic fight scene inside the dam glimpsed earlier, with everyone battling a horde of Chitauri. Or Ultron-bots. Or whatever.

The Other Shoe Drops

Is that the Hulkbuster?

By the time Legends premieres next year, Marvel's Ant-Man will have already hit cinemas. But DC is getting one-up on the competition with their own version of a magical shrinking man. (I can already imagine the impending wave of Atom/Ant-Man fan fiction.)