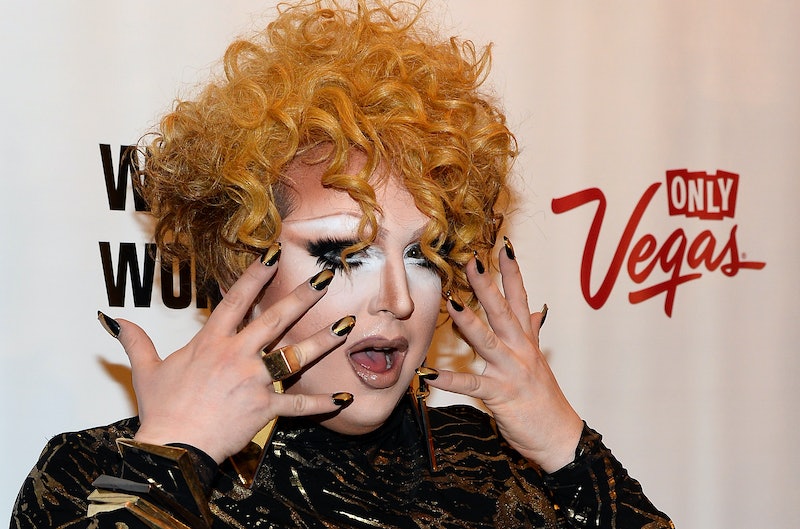 We all know that the visibility of plus-size women is sorely under-served in the mainstream media — and when we are visible we are the comic relief, tragic best friend, always the bridesmaid never the bride. The drag scene, however, is different, as plus size drag queens are celebrated for their art form (and naturally occurring breasts). As in any subculture, there are, of course, those who do not join in the celebrations, but I'm here to tell you that we the people are living for our big drag sisters. They remind us that we're not just the before photos of weight loss companies, or the headless torsos of scaremongering pieces on the "obesity epidemic." We're SO much more.

Her Royal Highness RuPaul has been famously quoted as saying that "anyone who leaves the house in a wig and a pair of high heels is her hero," and rightly so! It takes a lot of hard work and both mental and physical strength to be a drag artist and, in my experience, the heavier you are, the less comfortable those high heels become.

Like HRH RuPaul, I have enormous respect for all queens. Their dedication to their art is evident in every little detail, but none more so than those plus-size artists who are out there representing not just the world of drag, not just the LGBTQ community, but plus-size women round the world as well. They are fierce, fearless, and fabulous and the world needs as many people who fit that description as we can get!

Clearly, I am a huge fan of RuPaul's Drag Race, and I would like to introduce you to my favorite plus queens of the past seven seasons.

Porkchop had a short stay on the show, being eliminated in the first episode of season one, but she has attended just about every season finale ever since and has held a special place in my heart since I fell in love with her via the documentary Pageant .

Mystique has undergone quite a transformation since she appeared in season two, having lost a substantial amount of weight in the last five years, but there's no way I couldn't include her in this list.

Mimi made quite an impression during her time on the show, and she continues to make me gag on her eleganza!

It was impossible not to fall for this fierce queen from Back Swamp, NC. Stacey was not afraid to show that she could be vulnerable, whilst simultaneously being the strongest woman in the room at all times. I have so much love.

They don't come much more ambitious than Delta Work. And she can paint for the gods.

I don't think there has ever been a queen (other than HRH herself) who has been so loved by her public. Latrice Royale, if you see this, PLEASE can we best friends?!

May I call you Jiggly? This queen could not sew but her lip-syncing gave me life.

Penny was a fan favorite, who was eliminated on the first episode of season five. I would have loved to have seen what else she had to offer had her stay been a little longer!

All of these queens are fierce, but if I were going to choose the DESPY Award for Fiercest Queen, Darienne would definitely be the one to beat.

Ginger is beautiful, quick-witted, sharp-tongued and long-eyelashed. She's essentially the plus-size Floridian version of Bianca Del Rio. And her Adele impersonation is hilarical.

Plus-size queens of the world, I salute you!

More like this
I Tried Kendall Jenner's No-Pants Look As A Plus-Size Woman
By Sarah Chiwaya
Instagram & Facebook May Finally Lift Their Notorious Nudity Ban
By Allie Fasanella
42 Black Owned Fashion & Beauty Brands To Support Today & Always
By Mekita Rivas, Shea Simmons, Kui Mwai and Dominique Norman
You're Aging Your Body Too Quickly If You're Not Doing Any Of These Things
By Bimini Wright
Get Even More From Bustle — Sign Up For The Newsletter
From hair trends to relationship advice, our daily newsletter has everything you need to sound like a person who’s on TikTok, even if you aren’t.