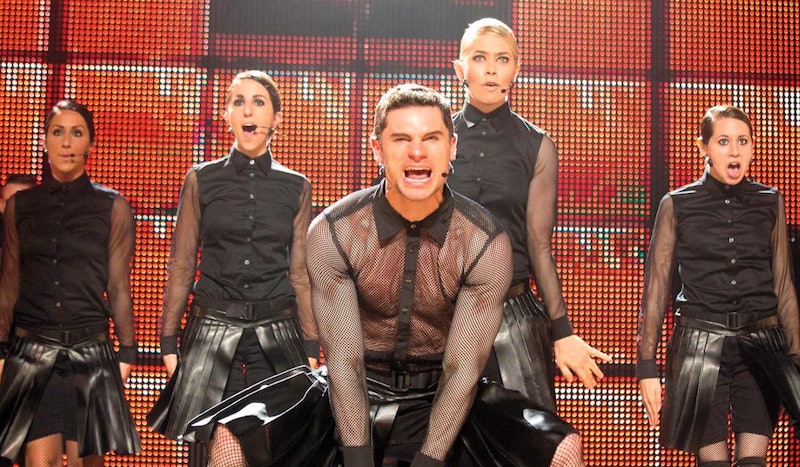 It's been a long time coming, Pitch Perfect fans, but the day has finally arrived: Pitch Perfect 2 hit theaters on May 15 after what felt like, basically, decades. As those who have already headed over to the theater to soak in the magic of the film know, the highly-anticipated sequel to the 2012 girl power film is full of a ton of cameos — it can be difficult to keep everyone straight! However, I'm sure fans had no issue noticing one new character that Pitch Perfect 2 introduced to the world: Pieter Krämer, a member of a German a cappella group who are rivals to the Barden Bellas, portrayed by Flula Borg. His presence is so difficult to miss, in fact, that many fans may be wondering just who Flula Borg is.

Well, luckily for you, that's exactly what I'm here to tell you.

Flula Borg is a German-born multipurpose entertainer who does work as a musician, DJ, actor, hype man, and YouTube personality. Known for the viral hits "Dirk Nowitzki: German Moses," "Jennifer Is A Party Pooper," and "Sweet Potato Casserole," Borg's hilariously offbeat autotune remixes, original videos, and collaborations with fellow YouTube stars like Grace Helbig, Miranda Sings, and Chester See have earned him a Streamy Award nomination and the title of New Media Rockstar in the past — as well as over 500,000 subscribers on YouTube. According to his website, Borg also has "more functions than a Ziploc bag," and "is custom-built to entertain" as a result. So, there's that.

According to Pitch Perfect 2 producer Max Handelman's interview with People, Borg's over-the-top online persona was a natural fit for the Pitch Perfect sequel. "To be around Flula and know Flula is kind of a unique thing," Handelman said. "Flula brings this joyful and manic and crazy energy to the sets and his performance. But he's also extremely talented. He can beatbox, he can sing, he can dance, he's very funny, and he's an extremely smart guy."

Handelman added, "[Borg's] part of that Pitch Perfect fabric. He's a character you wouldn't find in any other movie. But when you see Flula pop up in Pitch Perfect 2, you're like, 'Yep, that's a Pitch Perfect 2 person!'"

Somewhat surprisingly, though, Handelman also revealed Borg's casting was almost accidental. "Originally [Borg's role] was written to be a Fat Amy doppelgänger, Zaftig Anke," Handelman said, adding that Borg's audition proved to be a casting game-changer. "We ultimately loved Flula so much and thought he was capable of doing so much more than a one-note Zaftig Anke joke that we changed the role for him."

According to his IMDB page, Borg has quite a few film projects lined up for the future including Killing Hasselhoff , starring Ken Jeong, Hulk Hogan, and David Hasselhoff — so it's quite possible we'll be seeing a lot more of this guy in Hollywood in the future.