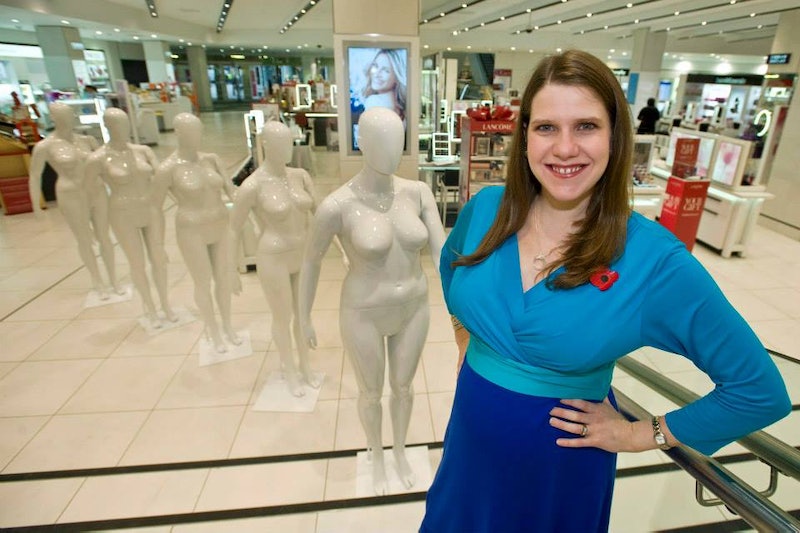 Have you noticed how pin-thin all store mannequins are? Have you noticed that they're all dressed in the smallest available size and the garments still need to be pinned and tied back so they don't drape shapelessly on the skinny form? Have you noticed that some come equipped with jutting collarbones and visible spines? Are you annoyed by this? Me too. But a British department store is doing things differently. This week, Debenhams department store will begin rolling out size 16 mannequins to "better represent what real women actually look like when advertising our clothes.” The plus-size mannequins will debut at the chain's flagship London store today and soon start showing up alongside standard size 10 mannequins around the country.

"The dress size of the average British woman has grown from a 12 to a 16 in just over a decade, but stores still typically use size 10 dummies to display clothes," notes The Telegraph's Emma Barnett. [A size 10 in the UK is equivalent to a size 8 in the United States, a UK size 16 to a U.S. size 14.]

In a Facebook post about the new mannequins, Debenhams said the move was "part of our on-going inclusivity campaign which has seen us use a range of men and women of different sizes, abilities, ages and ethnicities in marketing campaigns." And if the Facebook comments are any indication, British women are psyched about the switch. A sample:

"I'm a 14 and too see larger mannequins is a great confidence booster!"

"Glad to see a shop taking notice of the majority of women that shop with them."

"It's showing, not everyone is the same. I think it's bloody great! I want society to change before my children become women, they MAY be slim, and small, but most likely they'll be more like me."

"I think this is a brilliant idea. Though i love a browse i can never seem to imagine what it looks like on a bigger woman."

"Fab move ... its been years where curvier women have had to make do with "Size zero" is best or quick diet fads etc..now..Hi to the average UK woman in debenhams!"

This isn't the only time Debenhams has gone against prevailing beauty standards. Earlier this year, the company announced that it would stop using airbrushed models and told other stores that they had a "moral obligation" to do the same. Debenhams also made a business case for doing so: “We have stopped spending thousands on retouching," a company director told The Telegraph. They also launched an ad campaign that featured physically disabled models.

Will American department stores take note? There has been a push for plus-size mannequins in the U.S., but it hasn't gotten very far. Some have suggested that it shouldn't be "the store's responsibility ... to protect women's feelings." But that's a pretty patronizing way to look at it. Mannequins of diverse sizes aren't just a way to make certain customers feel better about themselves; they're about showing how the clothes being sold might actually look on a variety of shoppers. I think as long as women come in all shapes and sizes — and we do! — mannequins depicting women probably should, too.

More like this
23 Times Meghan Markle Dressed Just Like Princess Diana
By Bustle UK
Rihanna’s Makeup Artist Isamaya Ffrench Is Launching Her Own Makeup Line
By Tomi Otekunrin
How To Style Your Hair For A Festival, According To Maya Jama’s Hairstylist
By Tomi Otekunrin
Why “Patch Snatch” Ponytails Are Everywhere Right Now
By Tomi Otekunrin
Get Even More From Bustle — Sign Up For The Newsletter