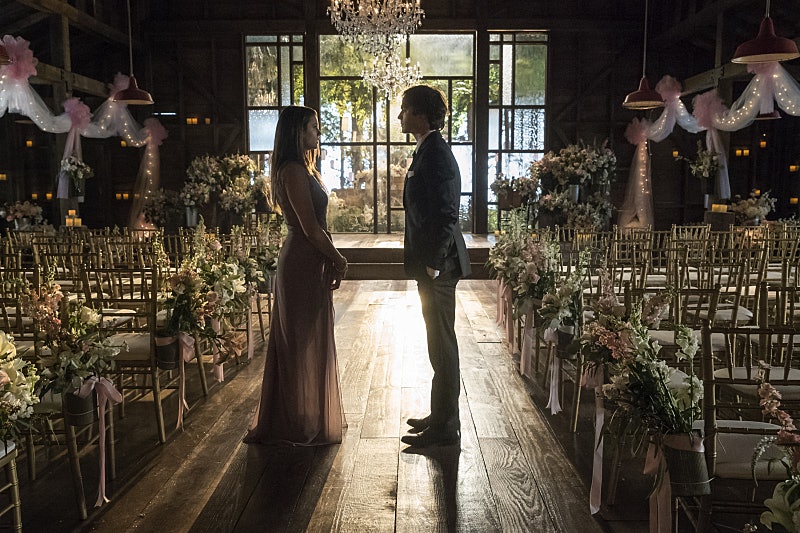 Though I originally thought it would be impossible to give Nina Dobrev the fitting Vampire Diaries exit she deserved, I could not have been more wrong. The series did an outstanding job of saying goodbye to Elena in a way that offered hope for the future, long after this show ends. After discovering that Elena and Bonnie are magically linked, it was time for everyone to say their goodbyes as Elena geared up for 60-70 year nap, Sleeping Beauty-style. So, of course, this meant we had a heartbreaking Delena goodbye in store, and it was done in the most beautiful way possible. By using his vampire powers to tap into her subconscious, Damon and Elena shared one last dance together on The Vampire Diaries.

Of course, this should've immediately brought back memories to one of their very first major Delena moments with each other. You know which one I'm referring to — when the two of them danced at the Miss Mystic Falls Ball. Their chemistry back then was undeniable and more than proved that they were a couple worth rooting for. And as Thursday night's finale further enforced, not much has changed even after all this time. They still fit so well together, making us yearn for the day they can once again be reunited. The way I see it, this dance offered up hope that a love like theirs is transcendent and can withstand anything you throw at it.

So while Elena was right in saying that Damon should continue to live his life while she's gone, we can at least take comfort in knowing that their separation isn't permanent. And that, when enough time has passed, Delena will have the chance to reunite and share many more dances together in the future.

Check out the touching scene below. That is if you can see it through all the tears.

More like this
Legacies Showrunner Said There Is Still Hope For More Vampire Diaries
By Gretchen Smail
Emma Thompson, Lashana Lynch, & Stephen Graham Lead Netflix’s 'Matilda'
By Sophie McEvoy
Why You Loved 'One Tree Hill' So Much — And Still Do
By Sabienna Bowman and Radhika Menon
Neil Patrick Harris Will Play 'Doctor Who's “Greatest Enemy” Yet
By El Hunt
Get Even More From Bustle — Sign Up For The Newsletter