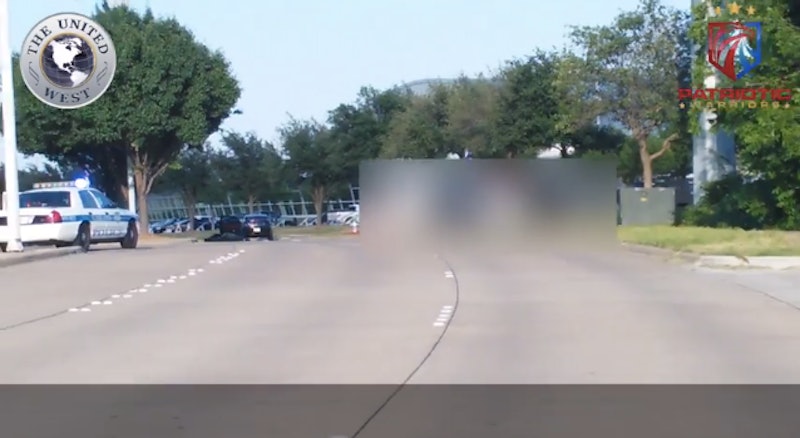 On Thursday, startling new video of the Muhammad cartoon contest shooting in Garland, Texas, shows the scene where police encountered two gunmen who were shot and killed after allegedly opening fire outside the controversial event. The video, uploaded on YouTube by Patriotic Warriors, was captured by bystanders who appeared to have accidentally fallen upon the scene in their vehicle. The gunmen, identified by authorities as roommates Elton Simpson and Nadir Soofi, were killed in the May 3 confrontation, and ISIS has claimed responsibility for the attack, although that has yet to be verified by authorities.

The video begins after the gunmen appeared to have already been shot. Two male voices are heard in the video, shocked and scared at the chilling scene. In the video, one of the witnesses says they were driving back from Wal-Mart when they saw the shootout take place. The video shows a black car, allegedly driven by the two gunmen, stopped in the street with the driver's door open. At least one body of the gunmen can be seen in the video lying on the ground next to the car. The faces of the police officers are blurred out. At least two more shots are heard being fired as the witnesses attempt to drive away out of fear of being hit by a bullet.

One of the witnesses, identified as Jerome, told Fox News they tried to flee the scene but were unable to put their car in reverse.

No matter how fast you run a bullet is going to catch you. We were like, forget this car, like, we gotta step. We didn't know if that guy was gonna, you know, shoot or not.

According to Fox News, the video refuted the police's initial claims the gunmen were shot and killed by an off-duty security guard. Mitch Bates, Garland's police chief, clarified in a Monday news conference the specific details of the shootout between the two gunmen and police. Bates said a lone officer, who was working security detail at the event, shot and wounded the suspected shooters before being joined by four SWAT members armed with assault rifles and pistols. The gunmen and police exchanged gunfire, during which dozens of rounds were used, before the shooters were killed, he said. Around 40 Garland police officers were on duty guarding the event, according to the Associated Press.

Many Muslims consider drawings or depictions of Muhammad as disrespectul to the religion and sometimes blasphemous. The cartoon contest was a controversial event, hosted by the American Freedom Defense Initiative, which is known to promote anti-Islamic views. Hours before the shooting occurred, the FBI sent local police a bulletin that included the license plate number and photo of one of the gunmen, though local authorities said they did not see the notice in time.