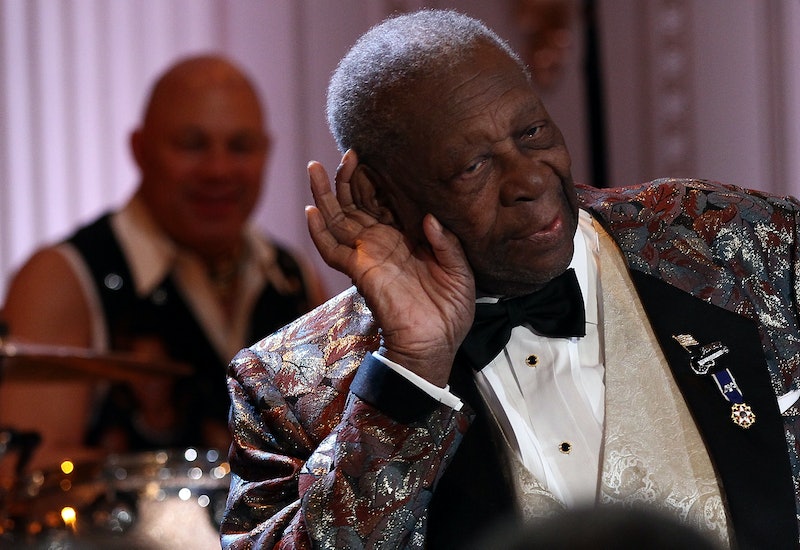 King wasn't just talented as a musician. His words behind the scenes, in books, interviews, and documentaries, are inspirational to the world at large. He had a mischievous sense of humor, and a self-awareness about all that he had accomplished from his humble beginnings. He was able to reflect on his flaws and virtues with a critical, fair eye and, throughout it all, he never stopped touching people's hearts.

He may no longer be a living legend, but these seven quotes will stand as part of his amazing legacy.

"The beautiful thing about learning is that no one can take it away from you." —African American Quotations, 1998

This is a quote very commonly attributed to King and collected in a book of inspirational quotes from African-American figures by Richard Newman. It applies to so much in life, from staying in school to picking up a new skill, and should pretty much be emblazoned on a t-shirt.

"We all have idols. Play like anyone you care about, but try to be yourself while you're doing so." —B.B. King: The Life Of Riley, 2014

King might have been speaking specifically about music at this point, but this has broader appeal as well. It's OK to look up to people, and even to follow in their footsteps, just so long as you don't forsake your own unique self while doing so.

"Any time that people think enough of you to put up something that's everlasting is only going to make you feel good." —The Guardian, 2001

"Growing up, I was taught that a man has to defend his family. When the wolf is trying to get in, you gotta stand in the doorway. He has to get through you first before he gets into the house to get your family. I'm one of those guys who wants to be in that door." — Esquire , 2005

The fact that King was so protective of family and friends, because that's how he was raised to be, is incredibly heartwarming.

"I don't think anybody steals anything; all of us borrow." —African American Quotations, 1998

While this is debatable when it comes to the hot button issue of plagiarism, I agree that a lot of creativity is collaboration. There might be no such thing as an original idea anymore, but it's what you choose to do with an idea or a sound that comes to define you as an artist.

"When I do eventually drop, I pray to God that it will happen in one of three ways. Firstly, on stage or leaving the stage, then secondly in my sleep. And the third way? You'll have to figure that out for yourself!" —The Guardian, 2001

I think it's this quote that hurts me most of all. Rest in peace, B.B. King. You are dearly missed.

More like this
Cruz Beckham Teased New Music With An Adorable Nod To Mom Victoria Beckham
By Stephanie Topacio Long
Zach Gilford Admits He Forgot Taylor Swift's Name When He Starred In Her Music Video
By Jake Viswanath
Twitter Is In Awe Of Taylor Swift’s “Lavender Haze” Music Video
By Jake Viswanath
The Jonas Brothers' New Album Has A Very Meta Name
By Alyssa Lapid
Get Even More From Bustle — Sign Up For The Newsletter
From hair trends to relationship advice, our daily newsletter has everything you need to sound like a person who’s on TikTok, even if you aren’t.