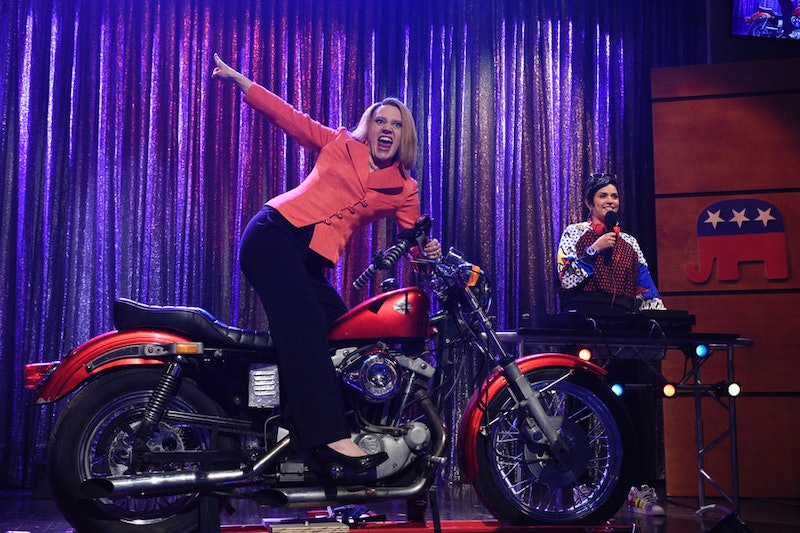 After a big 40th (!) season, Saturday Night Live is going out on a high note. The May 16 season finale features host Louis C.K., who's always a delight when he's on the show, and musical performances from Rihanna. (I'm only sad that Andy Samberg isn't on the show anymore, so he and Rihanna can't do another "Shy Ronnie" short.) But, even with all of the fuss surrounding SNL's four-decade anniversary, it's not too early to start thinking about Season 41. So, when will Saturday Night Live Season 41 premiere? [Update: NBC has announced that SNL will return Oct. 3.]

The good thing about SNL is, after so many years, it's staked out its spot in the schedule. Saturday nights at 11:30 belongs to SNL and only SNL, now and forever. Each fall, NBC can tinker with primetime all it wants. It can pick up and cancel shows, switch around time slots, and hold shows for midseason, but none of it ever affects the late-night Saturday lineup. Really, it's not a high-competition time slot. NBC hasn't made an official announcement yet about SNL's return for a 41st season, but it doesn't have to. Like the changing leaves and back-to-school anxiety dreams, Saturday Night Live's just something that happens every fall. Almost every season in the last 10 years has begun in the last two weeks of September (except for Season 30 and 31, which cruelly made fans wait until October 2 and 1, respectively).

And we can trust NBC to stick to this schedule, because by the time the fall rolls around, the presidential campaign season will be in full swing. Usually, SNL gets a ratings bounce during the election cycle. In the Tina-Fey-as-Sarah-Palin year, the network even ran extra Thursday half-hour "Weekend Update" specials to take advantage. Plus, Hillary Clinton is running. If there's one thing SNL loves more than any other thing in the entire world, it's making fun of Hillary Clinton. I've been watching the "classic" episodes they've been showing before the new ones — and also recorded a bunch of old episodes that aired on cable during the run-up to the 40th anniversary special — and Hillary Clinton jokes have been the show's bread-and-butter long before Amy Poehler did her famous imitation. During the Bill Clinton years, most of the jokes were still about Hillary. Many of them haven't changed. It's actually kind of galling. But I'm sure Hillary will keep the show running through the 41st and 42nd seasons (and maybe even beyond, depending on the election results).

Though SNL's fall return and time slot are usually so dependable, the one thing that does change is the cast. Usually, we don't find out about who's staying and who's leaving until a couple weeks before the season premiere. But this year, one cast member has announced his intention to stay: Kenan Thompson. Thompson announced that he was staying through SNL 's 41st season on Marc Maron's WTF podcast. It's hard to believe because he's so baby-faced, but he's going to be the most senior member in the cast. Other than that, it's all fair game. Hopefully, they'll get Amy to come back and do some more Hillary impressions, because I love Kate McKinnon, but her Clinton needs work.