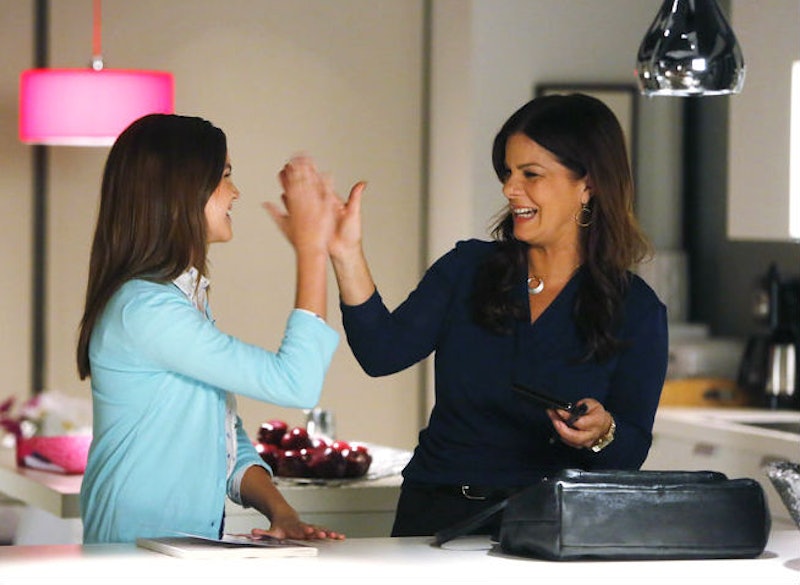 As Pete’s (Whitford) ex-wife Diane, Harden started off as a cool, collected, unflinching, over-achieving character – one we’ve seen her tackle flawlessly time and time again. But as the episodes of Trophy Wife’s first season rolled out, we began to see that beneath her icy smirk lies the comedic stylings of an evil genius.

It would have been easy to keep Diane as the pilot portrayed her – as a cold, hard pain in Kate’s (Akerman) side as she navigates her new life with Pete. But Diane is nothing of the sort. She’s more concerned with torturing her children with salsa dancing and salsa-based meals until they confess they spilled the tomatoey delight on her previously pristine slate-colored couch. She devotes all the extra time she has (you know, that thing that former Olympians and surgeons definitely have) to “some light catfishing” by creating a fake teenager one town over so that she can spy on her children. Her Halloween costume was both ambitious and completely absurd – and it matched everything in her predominantly light grey home. And all of this nonsense is made hilarious and possible by Harden and her unique brand of stoic delivery.

But nothing could have prepared us for the brilliance of Tuesday night’s episode, during which Pete and Kate throw an “adult party.” Diane stops by to pick up Hilary’s math book and in the process of moving some red Solo cups in order to find it, Kate’s immature buddy Meg (Natalie Morales) snaps a photo of Diane and uploads it to Instagram along with the popular hashtag “#drunkmoms.” While the first half of this harrowing situation provides some great generational comedy – Diane calls it “Instant gram,” wonders what “number drunk moms” is, and marvels at the fact that Meg “can afford the Internet” – that’s only the first half of Harden’s perfectly-delivered attack.

That’s right, it’s time for the classic sitcom plot: get the stoic one drunk. When Hilary finally convinces Diane that only the person who posted the photo can remove it, Diane is forced to visit Meg’s dive bar – the likes of which has never seen a lick of soap and presumably, the light of day. And because Meg never just does anything because someone asks her to (she’s a wild 20-something, after all), she makes Diane – the prim and proper career woman in impeccable suits and Berkin bags – play beer pong with her.

Now, this is no revolutionary idea. It’s always fun to put characters like Diane in these unfamiliar situations, but what makes this work is having a formidable talent like Harden behind the wheel. That way, when Diane gets drunk and has to stitch up Meg’s head wound in the skeevy bar bathroom, we actually care about this woman who’s transcended her stripes rather than just gawking and laughing at the uptight lady in a gross bar, LOL.

And when it comes down to it, that’s the entire reason Trophy Wife (I know, the name is terrible – we may have another Cougar Town situation on our hands here) is great. It’s a series all about subtly undermining first impressions. It’s not that Kate isn’t a young woman who still wears super short shorts and wants red Solo cups at an “adult” party, it’s that those characteristics don’t define her. Harden’s Diane gets the same courtesy and because we’re dealing with an incredible actress, her character has an incredible sense of gravity. Diane is not a punch line, as I feared upon first meeting Pete’s “cold ex-wife.” She feels like a mother you might actually see in nature, with a hyperbolic kick because this is a sitcom, after all.

Even if you can’t bring yourself to stomach a show called Trophy Wife, at the very least, you should be able to look upon it and appreciate the fact that someone at ABC finally realized that you can do mainstream, family comedy right if you have three things: solid writing, a great cast, and Marcia Gay Harden.

More like this
At 14, Kate Berlant Had A Wheelie Backpack & One Line In 'Lizzie McGuire'
By Samantha Rollins
James Marsden Kept Teddy’s Westworld Season 4 Return A Secret “For Years”
By Brad Witter
Don't Expect To See Your Fave Modern Royals Depicted On 'The Crown' Season 6
By Jack Irvin
Vanessa Hudgens Proves She's Always A Wildcat At This 'High School Musical' Location
By Alyssa Lapid
Get Even More From Bustle — Sign Up For The Newsletter