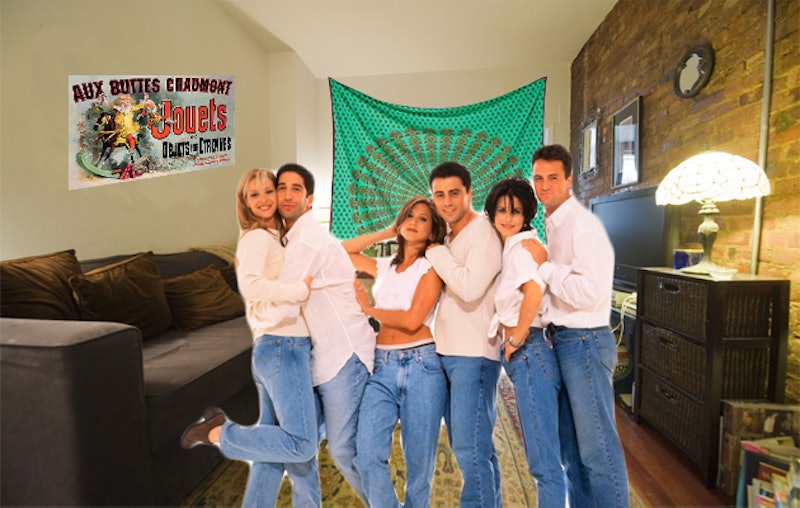 By now, everyone is aware of the unrealistic nature of the apartment in Friends , and, furthering that, every TV apartment ever. By financial standards, those crazy twentysomethings on the hit NBC sitcom would be shacking up in a Bushwick studio apartment if they tried surviving in New York on a waitress or barista salary. Or better yet, they would've lived in Manhattan for three months before moving back in with their parents on Long Island. But barring the limitations of real life, you do have to wonder... what would the Friends apartment look like today?

And I truly mean the modern 2015 television equivalent, because as previously mentioned, it would be a glamorous mold-encrusted box in reality. Would Greenwich Village be a hip and happening place for the sextet, or have the sands of time made it passé? Would the big screen TV be a necessity in a world gone online? And as for the ugly naked guy, is he just taking nudes for Snapchat all the time? The last one has nothing to do with aesthetics, I just think it would be a viable excuse.

Here's a quick snapshot of what the Friends apartment would look like in 2015... you know, the television-approved version.

Greenwich Village is out, and Rachel and Monica are living in a 1.5 railroad apartment in Williamsburg.

Which may sound like a downgrade to some, but to the average young adult New Yorker, grabbing that kind of apartment is like harpooning the white whale.

They keep one brick wall, but the other walls are pure white due to Monica's obsession with minimalism.

She curated a really meticulous board on Pinterest that keep things strictly neutral, and now Rachel's trying to step in with the Audrey Hepburn poster and the hot pink framed Kate Spade quotes. I mean, are they really THAT version of New York, or are they black-and-white-polaroids-being-strung-up-by-clothespins version of New York? CAN YOU BE BOTH?

For some reason that stuff is timeless... or something from college that we all can't part with.

The cabinets are filled with mason jars and they have the saddest velour couch that they picked up from Salvation army.

Rachel's bedroom is technically the office, and it's divided by an Urban Outfitters tapestry from the Magical Thinking Collection.

It becomes an important plot point in the episode, "The One Where Monica Hears Everything."

Nobody owns a TV any more, instead the six of them crowd over Monica's Macbook Air when they want to catch up on Broad City.

Lord help anyone who gets in between Broad City night.

And Central Perk is still underneath the building, but it's now a wine bar called Merlot Street.

And Phoebe still goes there to play songs off her new vinyl EP, The Smelly Cat Experience, despite there being no open mic night. Gunther also still works there, but he's a sad 34-year-old with a Grizzly Adams beard who's just bartending until his musical project takes off. It will never take off.