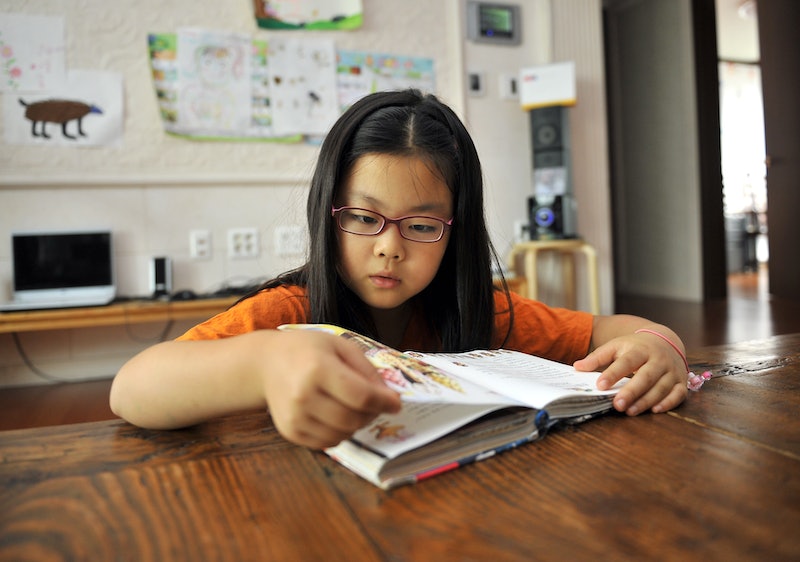 Remember middle school? Haha, me neither. But in the rush to forget the awkward pre-teen years, some actual good memories get pushed aside unfairly…such as the amazing characters from your favorite childhood stories.

You remember these people — the ones who stuck by you through your bout with braces, bad hair days, and unfortunate fashion trends (and no, I’m not including hair crimping in that, because I definitely still own and use my crimper from 2004, and as some people are proving, crimped hair will be cool forever). It didn't matter that they were fictional, they were there for you, which is a lot more than most of us can say for the real but often super mean girls we hung out with during those years.

Sure, maybe these characters gave you unrealistic expectations about some aspects of life…for example, there are way fewer brooding bad boys with hearts of gold and swooshing hair than middle school literature leads one to believe. Also, being a teenager does not mean going to the beach every day in a jalopy and sharing a milkshake at Pop’s, as much as young me wanted to believe that was true. But in the end, these characters probably contributed to your life more than you even realize…so let's look back and thank these forgotten (yet amazing!) childhood characters.

Alice McKinley from the Alice series

Alice was outspoken, friendly, and posed the burning questions other 11-year-olds are too shy to ask. Plus, this amazing series followed her UNTIL AGE 60, so you could literally grow up with her.

Betty Cooper = the ultimate girl next door. She was smart, kind, independent, and knew a ton about cars. Even though Archie always seemed to choose Veronica, Betty was patient and kind through and through and didn't let a love triangle get in the way of her friendships. Besides, she obviously belonged with Jughead anyway.

Violet Baudelaire from A Series of Unfortunate Events

Massie Block from The Clique

Ah, The Clique. The ultimate beach-read-that-I-read-not-just-at-the-beach. Even though Massie tries to label everyone as an LBR, she's still the undisputed Queen Bee that everyone wanted to emulate.

Ella of Frell from Ella Enchanted

Before the Anne Hathaway musical movie version of Ella Enchanted was the flawless book by Gail Carson Levine, queen of fairy tale retellings. Ella is independent and strong in the face of a curse, and ends up freeing herself.

Betsy's stories were inspired by author Maud Hart Lovelace's own childhood, and they paint a picture of life in the early 1900s. Betsy Ray herself is outgoing, sees the good in everyone, wants to be a writer, and follows her dreams relentlessly. Plus, in the early books she had an "office" in a maple tree, which was the coolest thing ever.

Molly could literally HYPNOTIZE people. She thinks her big eyes and monotone voice are flaws, but they end up being the key to her skill at hypnotism, so points for demonstrating body positivity, Molly! Plus, she turns Petula from a grumbling dog into an awesome and adorable pug sidekick.

Sammy is so fearless. She runs around town in high-tops, solving mysteries and eating her Grams' no-frills oatmeal. Also, her best friend is a 73-year-old dude with the coolest collection of boots ever, so she knows how to spot quality people. ALSO, her crush Casey was the brother of her enemy (~forbidden love~), and he introduced her to macaroni and salsa, which a girl obviously must try after reading this series.

Wendelin Van Draanen, author of the Sammy Keyes series, also wrote the NATIONAL TREASURE that is the book Flipped. Juli Baker raises chickens, sells the eggs for profit, tries to save a tree from being chopped down by refusing to come down out of it, stays true to who she is despite peer pressure, and is basically the coolest. As it says in Flipped, she is "iridescent."

Millicent Min is 11 years old, and she's in college, so she's already waaaay ahead of the game. She also has a super cool collection of quirky science t-shirts and a secret stash of Archie Comics under her bed. One time I tried to record my own audiobook of this book on cassette tapes. That's how obsessed I was with it, and I completely stand by that obsession to this day.

Max names herself after Sally Ride, the first American woman in space, so she obviously recognizes feminine strength and seeks to emulate it herself. She is a leader, knows how to fight and protect her flock, and is completely independent — not to mention that she has wings.

Kissin' Kate Barlow has such a tragic backstory, but in the end she gets her revenge, demonstrating that if life doesn't work out how you want it to, you always have the option of becoming an outlaw. Plus, the touch of lipstick was feminine AND bad to the bone at the same time.

Leslie Burke from Bridge to Terabithia

Speaking of tragic stories...this book messed. Me. Up. It was the ultimate childhood tearjerker, but despite the crushing ending, Leslie shows everyone how to dream big, and she has such a beautiful imagination. *still sobbing*

Sal goes on wild adventures and discovers so much about her identity in this awesome book. Plus, she's basically a detective as she tries to put the pieces together about the people around her. One time I wrote fan mail to Sharon Creech begging her to write more books, because that's how amazing every single one was — I felt like I knew Sal.

I was seriously so mad at Winnie in Tuck Everlasting. Because (spoiler alert) I WANTED HER TO DRINK FROM THAT FREAKING SPRING. She could have lived with Jesse Tuck forever! But, of course, I was missing the whole point of the book. Turns out Winnie was wise after all — at least, wiser than I would have been at age ten.

I remember buying this book from the Scholastic book fair because I thought the cover was awesome. Then it turned out that Esperanza was awesome, too. She takes care of her family and perseveres against the odds. She has to go through so much, but in the end she emerges strong.

Madison oozes early 2000s coolness. She wears rings on every finger, has a crush whose name is literally "Hart," and keeps a diary on her computer, which I thought was ~super fancy~ at the time.

First of all, Holly is an elf, so a million points for how stunning that is. Second of all, she's the only female captain in LEPrecon, and she's smart and snarky to boot. Go Holly.

Natalie Nelson from The School Story

Natalie writes a book at age twelve and, through a series of (mild) deceptions, gets it published. She was totally my role model.

Susie from Calvin and Hobbes

Susie is smart, sarcastic, and imaginative (remember her games with Mr. Bun, Calvin, and Hobbes? Some of the best moments in this comic). I would totally read a spin-off comic about her adventures.

Meg Murry from A Wrinkle in Time

Meg comes from a family of genius scientists, so from the beginning it's obvious that she's super smart. Though she's a bit of a misfit, in the end she saves the day, proving that underdogs are the best, and that girls really can run the world.

More like this
16 Novels That Paint A Realistic Portrait Of Abortion
By K.W. Colyard
Lauren Rae Is Bringing Back The Sex And The City Vibes In Her New Memoir
By Shahed Ezaydi
Sparks Fly Fast & Furious In 'Honey & Spice'
By Bolu Babalola
Aesop's Queer Library Is Open
By Tomi Otekunrin
Get Even More From Bustle — Sign Up For The Newsletter