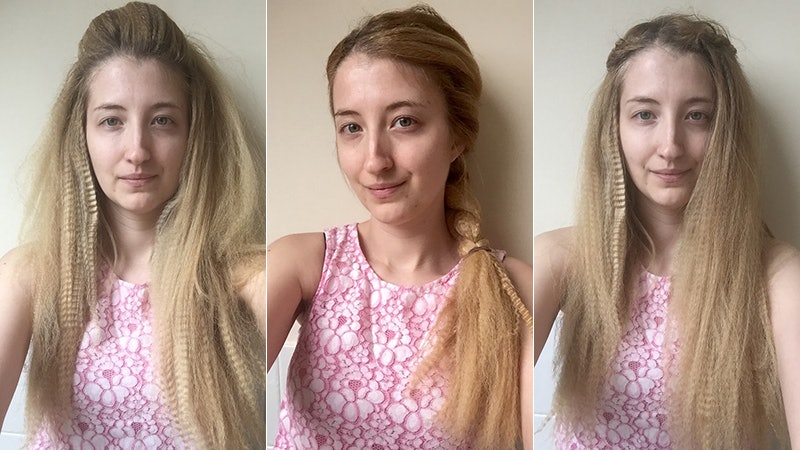 I have not been able to stop thinking about crimping my hair since Stella McCartney's spring/summer 2015 show models taught us all how to make crimped hair look good. The nostalgia blanket enveloped me within its comforting folds and I knew I just had to try it. All of our favorite '1990s stars wore this crinkly hairstyle from our favorite teen witch Sabrina Spellman to girl next door Lizzie McGuire; anyone who was anyone crimped their hair.

However, the burning question in my mind was, "How can I wear this '90s trend without it looking too '90s?" Don't get me wrong: I loved the 1990s as much as anyone who grew up in that decade could, but I must say it's not my all time favorite time period. Personally, my favorite decade was the 1950s — I just love the ladylike glamour and fun and frivolity of this era. I love this decade so much that a friend and I decided to create a '1950s/'1940s-inspired girl band.

So I decided to embark on an experiment to try out modern hairstyles paired with crimped hair. I think this is a good moment to say I am by no means a qualified hairdresser — come to think of it, I'm not even one of those girls who is insanely good at doing hair. So think of this experiment as a guide for the averagely-skilled, home-hairstyling gal whose biggest follicular achievement has been creating a singular victory roll that managed to last all day.

I thought it was worth including a "before" picture just to show what my normal hair is like. As you can see, it is naturally straight and quite long. It is also worth mentioning that it is quite thick, too. I bring this to your attention to warn that if anyone wants to try crimping at home who has similar hair to mine, you will need to dedicate a good couple of hours to crimping your whole head of hair. Unfortunately, I didn't have my trusty hairdresser friend at my side so I had to crimp my barnet by myself. I would recommend whatever your hair length or consistency, to ask someone else to do it for you, because it would make it so much easier to crimp all those hard-to-reach places.

This look is my homage to first-year Hermione Granger. This style consisted of crimping small sections of my hair to create this bed head/festival/Coachella hairstyle. I actually really liked it because not only did it make me feel like I could easily cast a levitation charm at any second, but I thought it would also accompany a cool, grunge look. I think it would look awesome paired with a leather jacket.

Next, I tried the classic full head of crimped hair. It's quite hard to see how crimped it really is so I took a couple of zoomed in shots:

While I am digging the lioness look and the quirky, Phoebe Buffay vibes, I was actually quite disappointed with how this turned out. I thought it was going to look like how it used to when my mom did it and I thought my mane would be massive. However, I didn't take into account that I used to have a lot less hair for gravity to latch its claws into, so I was setting myself up for a fall. Why are you ruining my childhood dreams, Gravity?!

Next I tried my everyday, go-to style: the quiff. I don't know what it is about this style that I love — perhaps having all my hair off of my face — but I have been wearing this style consistently for maybe five years or more. I think it looks quite cool with the crimps but a little OTT for everyday; it would really suit going to a music concert, a night out, or to accompany a halloween costume.

I think this is definitely a contender for best hairstyle to wear to a festival. The reasons being are: It's simple to do, it has a hippie vibe, and it wouldn't be destroyed too much by using dry shampoo. That being said, it does look a bit messy on the top, which could be down to one of two reasons: I am not a very good hairstylist or the crimping made my hair strands quite difficult to separate and they knotted very easily. The little braids looked really sweet and I loved how they stole the show with their extra texture; here's a close-up so you can see what I mean:

The crimping makes the braids super quirky and playful, don't you agree? This then inspired me to create my next style.

I am not usually a huge fan of sporting one large braid, as I think it gives off a stuffy librarian vibe. However, I am loving how the crimping has completely transformed the boring, big braid into a fun, modern, and wearable style. As with the small braids, the crimps added that extra pizazz to the large braid, making it appear somehow quirky yet majorly fashion forward all at once:

As you can tell, I fell head over tongs for this easy style!

I am not sure what the technical term for this style is, but I have dubbed it "The Half & Half" because the only other name for it that I know is my mom's nickname for it: "A bit up and a bit down." Although I like the slightly medieval gal vibes of this look, I am not enjoying the bird's nest at the crown of my head; which happened due to my fear of using a brush and wiping out my crimps. My crimp-eradicating fears were confirmed when I brushed my hair after this experiment and my hair melded together like some kind of blonde, fox tail which had been struck by lightening. Moral of the story is: dDo not brush your crimped hair. As I'm sure you can tell, this is my least favorite look.

First I tried a low ponytail like the Stella McCartney models, but unfortunately mine did not look anywhere near as chic as theirs. The problem being that my whole hair was crimped, whereas just sections of theirs was. So I went for a high ponytail instead. I don't mind this look but I wouldn't go out of my way to recreate it again. Somehow it appears I have gone back in time to the late '80s and look like I might be auditioning for Saved by the Bell, which I can assure you, was not my intention!

After the ponytail fiasco, I realized I needed to up my game in the sophistication stakes and what better way was there to do this than rock a ballerina bun? As a little aside, I just wanted to add in here that I managed this hairstyle with one hairband and one hair grip! Which proves this style is super speedy considering you'd already crimped your hair first. I loved this style because (as I mentioned previously), I love having my hair off my face and I think it actually looks quite chic. Here's a close-up:

It was actually really big as well, which I thought made it look quite different and with the added crimps, very fashion forward.

So, I will definitely be bringing back crimping and waving a flag to this much adored '90s trend. Although due to the amount of time and effort it takes, I might just save it for special occasions!