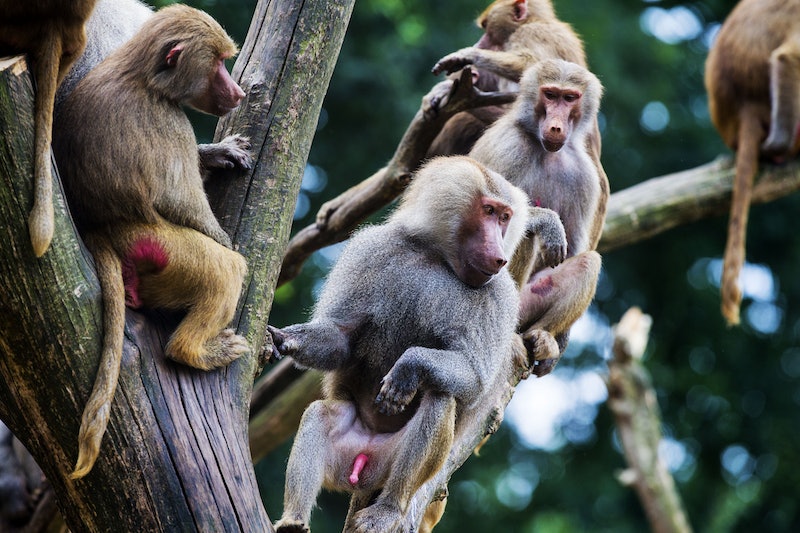 They say that monkeys and humans really aren't so different, but that might be even more true than you realize. After six years of research in Namibia, scientists have concluded that baboon troops are pretty much just like Mean Girls . Turns out all of those times Cady thought of her high school like it was the jungle actually weren't all that far off the mark. Which we kind of knew, but now it's backed up by science.

The researchers, led by the University of Cambridge and the international conservation charity the Zoological Society of London, tracked two baboon troops in Namibia's Tsaobis Nature Park from dawn to dusk for several months a year from 2009 to 2014. The goal was to observe baboons' patterns of behavior and how their social networks functioned. The result? It turns out that in a baboon troop, much like in a high school, individuals group together based on shared traits and interests.

Overall, the researchers found that the baboons were more likely to associate with baboons who were similar to them in terms of rank, age, boldness, and the propensity to generate and exploit information — in other words, your place in the social hierarchy, what year in school you are, if you're quiet or outgoing, and whether or not you're a nerd. And just like many high school cliques, they found that the baboons weren't too hung up on gender — male and female baboons mingled pretty freely.

And it makes sense. After all, if Mean Girls has taught us anything, it's that in high school we all engage in lots of monkey-like behavior.

And waving your butt around at seemingly out of place moments.

And, of course, as Cady observed, high schools might seem to be civilized on the surface, but in the subtext, this is what is really going on.

And sometimes — like, say, when a Burn Book is distributed throughout school — that stops being just the subtext.

Of course, it's unclear from this study whether or not baboon cliques are quite as catty as human cliques. For instance, do baboons call each other out for stepping outside their groups?

Or rub things in each other's faces?

Or personally victimize each other?

My guess is no. But hey, you never know!

The point seems to be, though, that Mean Girls is still pretty applicable to life in a baboon troop. So hopefully the baboons also have found their own way to absorb the message that movie taught all of us so well.

More like this
How to Delete (or Pause) Your Hinge Account
By Emma Carey
How To Fight For Reproductive Rights, Based On How Much Time You Have
By Courtney Young
How To Protect Your Digital Privacy If You Need An Abortion Post-Roe
By Kaitlyn Wylde
How The June 2022 New Moon Will Affect Each Zodiac Sign
By Nina Kahn
Get Even More From Bustle — Sign Up For The Newsletter