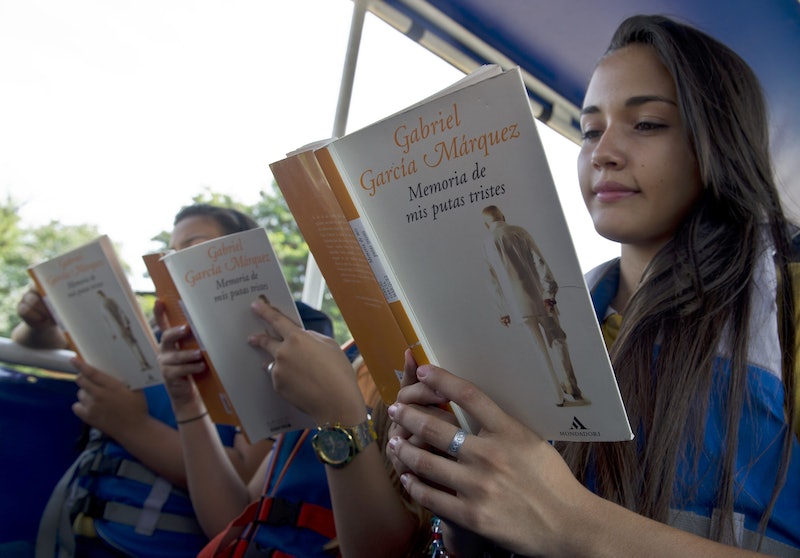 Whenever I'm talking about books with friends, I'm surprised by how most of them still primarily read books by white guys, often old, dead white guys. It turns out that most people’s familiarity with authors of color tends to end with their high school curriculum at worst, or, at best, at the not-terribly-diverse bestseller lists. Everyone knows Toni Morrison so well because you probably had to analyze the hell out of that cemetery scene in Beloved in 10th grade English. But ask an assortment of casual readers to list as many authors of color as they know, and you’re likely to get the same few popular names over and over: Junot Diaz, Toni Morrison, Gabriel Garcia Marquez, Sherman Alexie, Amy Tan… You know the ones I’m talking about.

All of those writers are of course brilliant, but they’re not the end-all-be-all of POC authors. Contrary to claims that “there just aren’t that many authors of color out there,” there are many, many very good POC authors, and the fact that they didn’t make your high school reading list has more to do with the bizarre notion of the singular (a.k.a “there can only be one”) model of cultural representation in schools and on bestseller lists than with the quality of the books.

The real question is how to decide which to read first. If most of the authors of color you know are from the sparse diversity of the bestseller lists and your 12th grade English syllabus, it can be difficult to know who else is out there and whose work is most in line with your interests and tastes as a reader. Rather than wait for your eager friend to accost you at the next party (which, by the way, I will absolutely do), consider starting with this list:

If your ovaries are feeling a bit wronged after spending too much time in the head of the sexist Yunior de Las Casas from Junot Diaz’s This Is How You Love Her, just run into the open arms of Maryse Conde’s I, Tituba, Black Witch of Salem. Conde is feminist to the core, and it shines through in her fiction. On top of that, reading Conde is like time-travelling. Conde’s novels travel all over the Caribbean and the Francophone world, and several of her books are flat-out historical fiction. All of them are immersive and detailed, giving you the full experience of wherever she’s taking you now.

Horacio Castellanos Moya is hilarious. Or at least, absurd. And also deadly serious. He writes amazingly flawed, absurd heroes into some of the most tragic events in Latin American history. Moya’s mix of humor and tragedy for a bizarrely real experience of the messed up histories of the dictators and massacres and politics that have devastated many a Latin American country. The one to start with here is Senselessness , where, like it’s title, you’ll see how this mix of hilarity and history play off each other to underline the senselessness of tragedy.

The thing is, a lot of people actually did read James Welch in high school, usually Fools Crow , but he’s pretty much been obscured and replaced on the high school reading list with Sherman Alexie (because U.S. public education apparently can't tolerate having students read more than one work of minority literature). But Welch writes a good book, so he’s well worth reading beyond the syllabus. His work is little more gritty than Alexie’s (which still manages to piss off enough parents to get his books banned every now and again), so, even if his books are on a few high school syllabi still, you sure won’t feel like a teenager reading them.

Speaking of grit… Chester Himes is straight-up noir, often set in Harlem in the 1940s. If you’re the kid who spent all of Native Son waiting for Bigger Thomas to slam a glass of whiskey, morph into a devil-may-care hero, and smart talk his way out of his seriously crummy situation, then Chester Himes is the writer for you. Try Cotton Goes to Harlem for gems like this:

“‘I got something for his guts,’ Freddy said, swinging the sawed-off shotgun.”

Many people don’t tend to think of Black people in the noir genre (ironic, right?), but Himes was one of the originals and one of the best.

Many of the African American novels you read in high school are centered around the best-known eras in Black history — slavery, the Civil Rights Era, the Harlem Renaissance. Gayl Jones’ novels reminds us of how this history is intimately connected to the modern Black person. And, boy, does she get intimate! Putting down one of her novels feels like realizing too late what the ice bucket challenge is. One minute you’re a blues singer with boy troubles and a messed-up lineage, the next you’re wondering how you got to your office and your lunch has gotten cold. Fun fact: Toni Morrison was actually Gayl Jones’ editor at Random House for her first novel Corregidora .

Paula Gunn Allen took a pen and busted down the gates keeping Native American women writers out of the canon. Her poetry and fiction are beautiful, but her academic work wins the spotlight here. Her scholarly work made universities all over the U.S. take a seat and recognize Native American women in their courses. You just have to check out Pocahontas: Medicine Woman, Spy, Entrepreneur, Diplomat , which puts the kibosh on all that Disney nonsense and rewrites what we thought we knew about the famous Native woman hero.

While Langston Hughes was writing “hold fast to dreams,” Claude McKay was writing “If we must die — let it not be like hogs.” While many of the other Harlem Renaissance artists were doing their darndest to appease white America and show off how artsy and intelligent Black people are, McKay insisted (to a great deal of criticism from Black leaders) on baring it all — from the underbelly of Harlem to the hypocrisy of the era’s white liberals (or as the subtitle to his unpublished novel Amiable With Big Teeth bitingly sums up, “The Love Affair Between the Communists and the Poor Black Sheep of Harlem”). If you’re looking for a more well-rounded view of the Harlem Renaissance and a little more bite in your Black literature, try Home to Harlem.

Atiq Rahimi’s novels do some pretty cool things, like when Earth and Ashes tells the entire story using the second person “you” to put the reader right into the narrative. Like his more popular contemporary Khaled Hosseini, Rahimi writes often about the Soviet invasion of Afghanistan, but his prose and his perspective are wildly different from Hosseini’s and tend to feel a bit more mature. Rahimi is also a filmmaker, so you know that the movie versions of his books are gonna be on point. But there’s really no excuse not to read the books.

At the heart of many of Gish Jen’s books is something like a wink, or maybe a welcome smirk. With titles like Who’s Irish? and Typical American , they seem to poke fun at identity before you even open the book. Because of that especially, Jen is a great author for this list. In a U.S. where literature by authors of color tends to be obscured by identity politics, or, more literally, by bookstore categories (seriously, I can’t count how many times I’ve had to go hunting in the “African American” studies section bookstore after, for some unknowable reason, not finding that novel by a Black author in the “Fiction & Literature” section), Jen’s novels, like Typical American, force us to reconsider that big, confusing word “American.”

Percival Everett is all over the map, writing about everything from drunk gods to genius babies to the old West. He’s also absolutely brilliant and hilarious. Everett often deals with race in more subtle ways than you might be used to. In Glyph , for example, (spoilers ahead) the supergenius baby is too busy pondering semiotics to let the reader know that he happens to be a Black supergenius baby, explaining that it wasn’t really relevant until he’s kidnapped by two white women. In God’s Country , Everett’s narrator is a dumb, racist, white cowboy who travels with a Black tracker. But then, there’s Erasure , whose take on a Black writer’s parodies of “ghetto” fiction is anything but subtle. You just never know what you're gonna get from Everett, but it's always kinda epic.