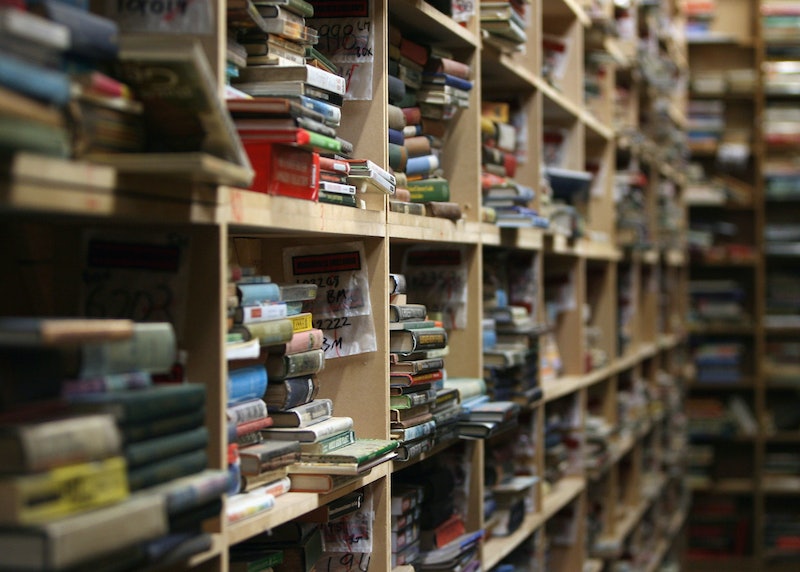 Maybe there's been some misunderstanding about Banned Books Week, the stretch of the calendar that's supposed to rail against censorship rather than encourage it. One school didn't get the memo: Last week, Highland Park High School in Dallas banned seven books. (I’m feeling déjà vu here — in 2013, two schools also took Banned Books Week rather literally.)

1. The Art of Racing in the Rain by Garth Stein

2. The Glass Castle: A Memoir by Jeannette Walls

3. The Working Poor: Invisible in America by David K Shipler

4. Song of Solomon by Toni Morrison

5. The Absolutely True Diary of a Part-Time Indian by Sherman Alexie

6. An Abundance of Katherines by John Green

To most, the list looks pretty disparate, aside from being a pretty good representation of contemporary literature. Unsurprisingly, however, what parents took issue with in these seven books is their sex content — the most common reason books are banned (which is problematic for myriad reasons).

A few of these books are frequently challenged, like Sherman Alexie’s book, which along with addressing issues of feeling like an outsider, and growing up on a reservation, also includes — as might be expected from a 14-year-old boy — thoughts about sex and jokes about jerking off. It seems inevitable that the well-written and deeply affecting YA book will always be challenged by squeamish people.

I was most surprised, however, to find Siddartha in its company — a book I remember more for being mind-numbingly dull than for containing some reference to a prostitute.

What’s so unfortunate about this misguided effort to protect teenagers from sex is that — besides being completely ineffective — the worst thing it might achieve is turning kids off o reading. Growing up in my New Jersey town, our assigned high school books were almost uniformly outdated and loathed by the students, if they were read at all. Not too long ago my sister was assigned to read Siddartha, a book I don’t think she even tried cracking open before turning to SparkNotes.

Other memorable contenders: The Picture of Dorian Gray, Beowulf, Machiavelli’s The Prince. At the risk of sounding like a philistine, the content is... pretty lackluster, especially to a high schooler. Of course the classics have their merits and are worth reading (usually in college, though, before you can really appreciate it). But if you’re trying to actually get kids engaged in reading — and maybe even loving — a book, contemporary lit can be a gateway.

It’s awful to see a few parents in this school district to have put the kibosh on learning. The school was on the right track in assigning really excellent YA books, by hugely popular authors John Green and Sherman Alexie, and Jeannette Walls’ memoir about growing up in a dysfunctional family. It’s important for teenagers to see themselves reflected in what they read, even if they haven’t experienced an unstable family life and addiction, they can more easily imagine this and empathize with the experience — more so than relating to, say, a guy in ancient India searching for spiritual enlightenment (sorry, Herman Hesse).

If these parents spearheading book-banning want to limit their child’s intake of sexual images, their fight is not with John Green or Sherman Alexie — it's with media at large.

Discouraging as it is to see this slew of newly banned books, maybe it’ll have the forbidden fruit effect. Hopefully the teens at Highland Park will check out these books for themselves, and find out just what exactly it is their parents don’t want them reading.