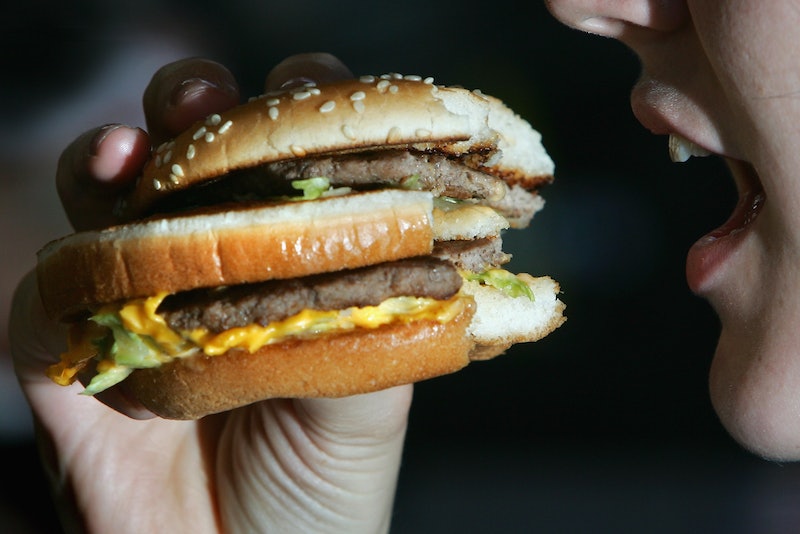 Everybody loves a good burger. Whether you're a bacon-loving carnivore or a health-conscious vegetarian, there's a burger out there for you. The same is true of presidential candidates — there's one for everybody and they come in every possible shape, size, and flavor. Since most people are very in tune with their burger preferences (I'll eat a sweet potato veggie burger any day of the week), but many struggle to pick the right presidential candidate out of the overwhelmingly long line-up, why not combine the two and make every voter's life easier?

Burgers are the perfect metaphor for people because, unlike most foods, there are about a million types that all contain the same basic components, but are totally different in looks and substance. All the Republican presidential candidates and all two of the democratic candidates essentially have the same ideological platforms, but it's the smaller details that set them apart from one another. Like a good burger, a good politician should look distinguished, yet approachable, be slightly unique, and leave you with a feeling of awe and satisfaction. There's nothing worse than a burger that leaves you still hungry, just like a politician who can give an hour speech without really saying anything.

Here's a definitive list of which type of burger the current 2016 presidential candidates would be.

Why: The Cordon Bleu Burger has a fancy European name, but at it's core, it's just a plain ole burger. The swiss cheese and dijon mustard are a step up from the average American cheese and boring French's mustard and the layer of ham adds a little extra substance. Like Clinton, this burger can fit right in at an extravagant restaurant or an outdoor picnic.

Why: Sanders has been deemed the greenest presidential candidate, so he would obviously be a veggie burger. Unlike frozen veggie patties that taste like cardboard and leave you unsatisfied, the homemade black bean burger is not only healthy, but also tastes delicious and fills you up.

Why: A spicy burger can be great if that's what you're expecting when you take the first bite, but if you were expecting a normal burger, your mouth will be in shock. Just as the jalapenos on this burger will ruin it for those that can't handle the heat, some of Cruz's opinions (i.e. birth control and abortion) are too extreme for many.

Why: Just like a classic hamburger, Paul is conservative and patriotic. The classic burger is brought out at every barbecue and family gathering and frankly, you're getting a little sick of it. If over- or undercooked (which let's face it, happens often), the classic burger can go very very wrong.

Why: The bacon burger can be a little deceiving — it sounds so appealing (who doesn't love bacon?), but there's a little something missing. Just as the bacon burger could use some cheese, Fiorina needs political experience.

Why: Like Rubio, the taco burger is trying to be new and edgy, but trying to fuse two very different foods never ends well. People either want a taco or a burger, not both.

Why: Carson, a vegetarian himself, resembles a Boca burger because like the frozen patties that barely qualify as a burger, Carson isn't really a politician, but a doctor. Boca burgers are trying really hard to pass as a healthy veggie burger, but in reality they're just another fake, processed wannabe.

Why: A burger from your nearest fast food chain seems like an OK idea when there's no other food choices in sight, but it leaves you still hungry and feeling a bit queasy. It claims to be the "American burger," but is barely made from real food. You can do much better than this burger.