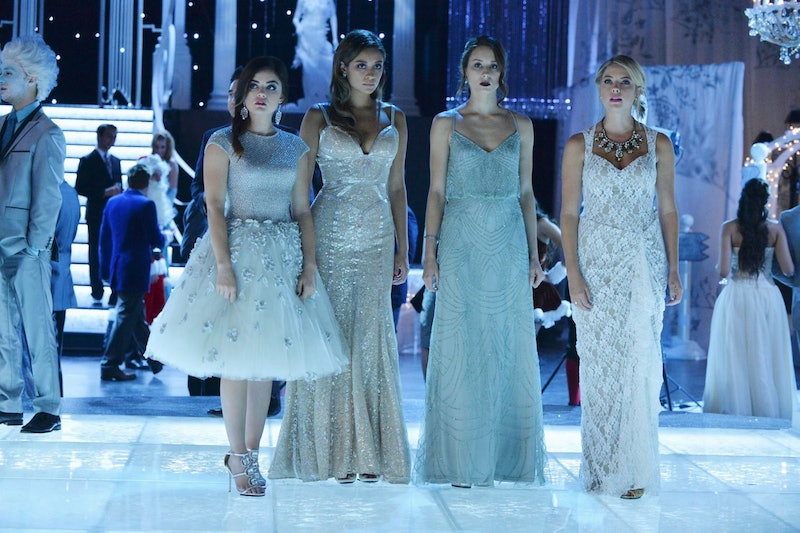 The dust has mostly settled from Pretty Little Liars’ Season 5 finale reveal that A is Charles, who many fans presume to be the brother of both Ali and Jason. With Season 6 starting on June 2, I’m aching to go back and watch Season 5 (and, let’s be real, all the other seasons) to see if there were any clues about Charles leading up to the finale. Fortunately for me (and you other PLL fanatics out there), a representative for the streaming service exclusively confirmed to Bustle that Pretty Little Liars Season 5 will hit Netflix on June 10. What a great way to kick off Season 6 and look for more Charles-centric information from last season. Update: A Netflix representative has revealed that PLL Season 5 will now begin streaming on June 2, just in time for the Season 6 premiere.

Pretty Little Liars episodes are always a rollercoaster of emotions, but Season 5 stuck out to me as featuring some of the most explosive and important episodes so far. The closer we got to A, the higher the stakes became. And now that we know that Charles exists, there are still miles to go before we know who he really is and what he wants. I definitely have some re-watching to do, so, in honor of Pretty Little Liars Season 5 streaming on Netflix on June 10, here are the episodes you should immediately watch again.

The girls were in good old New York City, running into desolate public parks and being chased by A in the season finale of Season 4. Oh, and Ezra got shot. This first episode of Season 5 shows where they ended up in the face of all that drama. Ezra lived, Shauna didn’t, and somehow, Noel Kahn knows everything about everyone.

Far be it from me to defend Alison DiLaurentis, but I really felt for her in this episode. It’s the one where she discovers that her mother has been found dead. Evil or not, Ali loved her mother, and Ali’s real emotions in the episode stirred something within me.

Aka the one where A blew up Toby’s house. All of the liars and lovers were watching television at Emily’s house (a press conference, to be exact), when BOOM — the windows fly in and Toby’s house stands in flames. A got real here. He had always been destructive before, but damn, son. He took down a whole house.

One scene in particular stands out to me from this episode: When Noel is sitting under a sheet in his lake house watching Spencer rifle through it. It was simultaneously hilarious and creepy as hell. Like, why is he just sitting there, and why does he look like a kid dressed up as a ghost for Halloween? Take it down a notch, Noel.

Episode 11, “No One Here Can Love or Understand Me”

Melissa Hastings is one of the most mysterious characters on Pretty Little Liars. She’s mean to Spencer, but she also loves her sister. I can barely keep track of her switching loyalties and many deceptions. In this episode, Melissa taped a message for Spencer, which revealed that despite her icy demeanor, she has actually been trying to protect Spencer this whole time. That’s sisterly love.

This episode is cute not only because of the scene featuring all of the liar-lovers parading down the stairs, Brady Bunch­-style, in themed Christmas underwear, but also thanks to Emily’s hilariously aggressive love for Christmas. I would not mess with her in a brightly lit department store aisle in December, that’s for sure.

There are three words that describe this episode for me: Semi-shirtless Jason DiLaurentis. He’s fine, OK? He is. Drew Van Acker is the hottest guy on the show, and maybe he’s Charles, and maybe he’s not, but I don’t care. I just know that I like what I see, and we see him and Ashley smooching a whole lot in this episode.

What are you favorite episodes, PLL fans? No matter which you choose to re-watch first, be sure to check out Pretty Little Liars Season 5 on Netflix starting June 10, so we can look for clues together. And be sure to theorize along with us while listening to Bustle's Pretty Little Liars podcast, "Taking This One To The Grave":