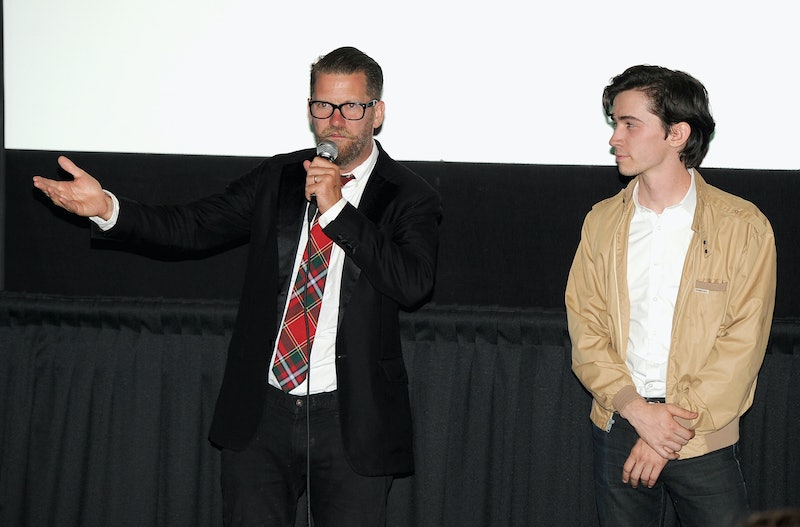 Writer and Vice co-founder Gavin McInnes has a reputation for sexist rants, but McInnes' appearance on the Sean Hannity show this week took it to a whole new level. He stated that women are unhappy because they "put work over family," earn less because they are "less ambitious," and are "pretending that they like working."

McInnes continued, saying that if Holder were a "real feminist," she would "support housewives" and take up the belief that "women who work [are] wasting their time."

There are many, many problems with McInnes' claims, but one of the biggest is his failure to acknowledge how complex the decision to work or stay at home often is. For instance, it's possible to be motivated to work by financial necessity, your personal ambition to be the badass only you can be, and the desire to show that family you're supposedly making secondary what it looks like for a woman to support her family and pursue her dreams. Another majorly offensive part of his statements was the implication that supporting homemakers and supporting women working outside the home are mutually exclusive.

As McInnes seems to need a reminder that women are individuals capable of logical decision making based on their personal preference and situation, perhaps he should skim some books that will help remind him how important it is not to force women to pursue one prescribed path.

The Handmaid's Tale by Margaret Atwood

This chilling work of speculative fiction imagines a society in which women are forbidden to read and forced into jobs as "handmaids," which means they must either care for or bear children, without any say in the matter. Take in Atwood's dystopian vision, Gavin, and come back to us about whether limiting women's professional options is what you want for America.

The Awakening by Kate Chopin

Edna Pontellier struggles to reconcile her changing viewpoint on motherhood and what it means to be a woman in this 1899 novel. Her desire to find an identity beyond the role society chooses for her sparks the titular awakening. The build up to it is a good reminder of how oppressive some women find staying at home — particularly when they aren't given a choice.

This book follows a friendship between two Afghan women, Mariam and Laila, as they face and triumph over hardship. Despite the fact that their society tries to force them into a certain role, both Mariam and Laila have rich inner lives beyond these cookie-cutter expectations. And instead of giving in to the expectations, they each fight to find individuality and achieve personal fulfillment on their terms.

Tina Fey's autobiography is a hilarious yet poignant chronicle of her life and work in comedy. Detailing stories from her time at Saturday Night Live to her successful show 30 Rock to snippets from her childhood, she gives great advice, such as: "Do your thing, and don’t care if they like it." Her point of view perfectly illustrates how it is possible for a woman to enjoy working — whaaat? — and how the path to success and happiness is different for everyone.

A Room of One's Own by Virginia Woolf

Literally all McInnes needs to read is the section of this work about "Shakespeare's sister." Woolf describes what life would have been like for Shakespeare's hypothetical sister, if she had been a skilled writer as well. It's clear from this section that the "misery" McInnes proposes women feel in the workplace is not because "they're not happy in the work force," but that it's a factor of a biased and exhausting society that women constantly have to work against. So instead of claiming that women don't like working, perhaps McInnes should consider that many women enjoy working, but dislike facing constant backlash from people with his current point of view. As Woolf says in A Room of One's Own:

"It needs little skill in psychology to be sure that a highly gifted girl who had tried to use her gift for poetry would have been so thwarted and hindered by other people...that she must have lost her health and sanity to a certainty."

Amy Poehler's autobiography is a perfect portrait of a woman obviously passionate about what she does. From the chapters detailing her work on Parks and Recreation and Saturday Night Live to the snippets of stories about everyday life with her children, it is clear that Poehler finds fulfillment from many different avenues, and has thrived on the ability to make career decisions based on her passions and personal goals.

More like this
16 Novels That Paint A Realistic Portrait Of Abortion
By K.W. Colyard
Lauren Rae Is Bringing Back The Sex And The City Vibes In Her New Memoir
By Shahed Ezaydi
Annie Lord’s Memoir Will Make You Believe In Love Again
By Shahed Ezaydi
Sparks Fly Fast & Furious In 'Honey & Spice'
By Bolu Babalola
Get Even More From Bustle — Sign Up For The Newsletter