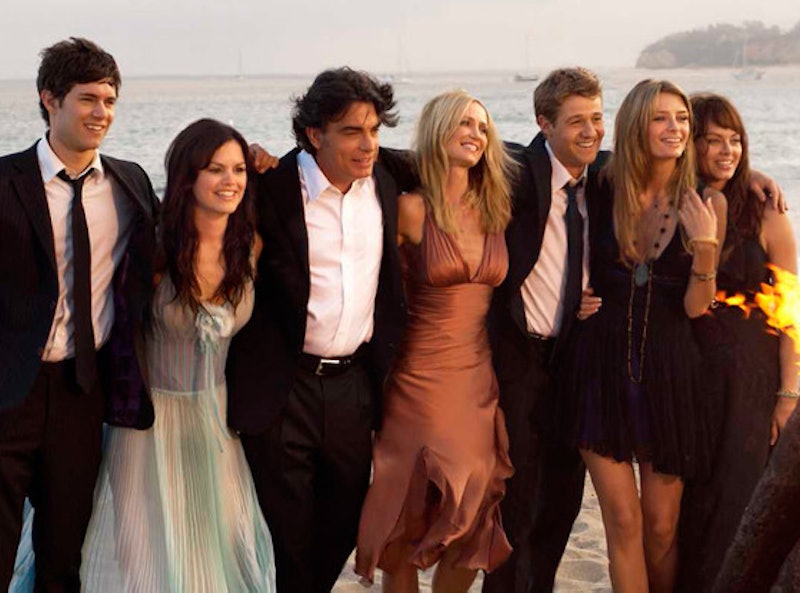 So much of fans' love for The O.C. centers on its core four: Ben McKenzie’s Ryan Atwood, Adam Brody’s Seth Cohen, Rachel Bilson’s Summer Roberts, and Mischa Barton’s Marissa Cooper. And who could forget Seth and Ryan’s parents, Sandy and Kirsten Cohen, played respectively by the inimitable Peter Gallagher and Kelly Rowan? But as important as all of these Newport residents were, The O.C. featured a ton of secondary characters who helped shape the show into the legendary teen drama it became.

Where would The O.C. have been if not for the added drama of Dawn and Trey Atwood? The scandalous betrayal of Holly Fischer? The cast of The O.C. was so much more than the “core four.” They wouldn’t have gotten into nearly as many entertaining scrapes if not for the people around them, and for that I am thankful. Who could live without the “Bullit”? Not me, that’s for sure. The show’s very strong ensemble cast is one of my favorite things about it. To celebrate those secondary-yet-completely-necessary characters, here are the most underrated characters to grace the screen on The O.C.

The Nana was nothing if not frightening, but I found her episodes of the series to be quite endearing. From watching The O.C., we knew that Sandy Cohen was an excellent father, but from seeing his interactions with his mother, we know he’s a good son too. The Nana wasn’t afraid to stand up for herself, but when she got vulnerable, that was the sweet spot. I would have taken as many episodes with Sophie Cohen as Josh Schwartz would have given me.

One of the Newport “Newpsies,” as dubbed by Sandy, Taryn liked party planning, Yogalates, and swinging (and I don’t mean on a playground). Though we didn’t see her an awful lot toward the end of the series, Taryn added much-needed frivolity to Kirsten’s life. Kirsten had a big job, and she was in charge of a lot of things. Taryn’s outright ridiculousness was a nice contrast to the very serious life of Kirsten.

As one of Sandy’s coworkers when he was the lawyer suing Caleb Nichol, Rachel really wedged herself in deep between Sandy and Kirsten. Not a great moment for their marriage, but totally engaging to watch. Would Sandy and Kirsten be felled by infidelity? Luckily, no. Not really. Also, what happened to actress Bonnie Sommerville? I miss you on television, Bonnie. Come back.

Hasn’t it been amazing to watch Chris Pratt’s career evolution? He went from playing Bright on Everwood to guest-starring on The O.C. as Che to Parks and Recreation, and now he’s a Hollywood action star. I like to think I remember him best as Che, the tree-hugging hippie friend that Summer made during her freshman year at Brown University.

A secondary character? Jimmy Cooper? Yep, I’m serious. Jimmy was not a major player in all four seasons of The O.C., so he gets bumped down to secondary status. I just wanted Jimmy to get his act together, and yet he never could. He turned from doting dad to delinquent dad, and though it was hard on Marissa, it made for a lot of plot development.

I loved Olivia Wilde's Alex because she was a welcome contrast to the bubbly California girls on the show. Alex was pretty much the antithesis of Summer Roberts, and it was nice for Seth to have a relationship with a girl like that. I seriously don’t think he had ever met anyone like that before in Newport.

I just wanted Volchok to be good, you guys. I hoped and I prayed and it just never happened. Instead, he got crazy jealous and killed Marissa. I liked Volchok’s softer side, and I’m sad he only showed it to Marissa.

I always liked Taylor Townsend because I am a little too similar to her. Totally Type A, needs to be in control, teacher’s pet. Unlike me, though, Taylor did all of this because her mother was pretty nuts. When Taylor loosened up (especially when she got with Ryan), she was a lot of fun. She also had quite a few surprises up her sleeve — remember her French husband and the book he wrote about her?

Now excuse me, I’m off to go rewatch the whole series of The O.C.