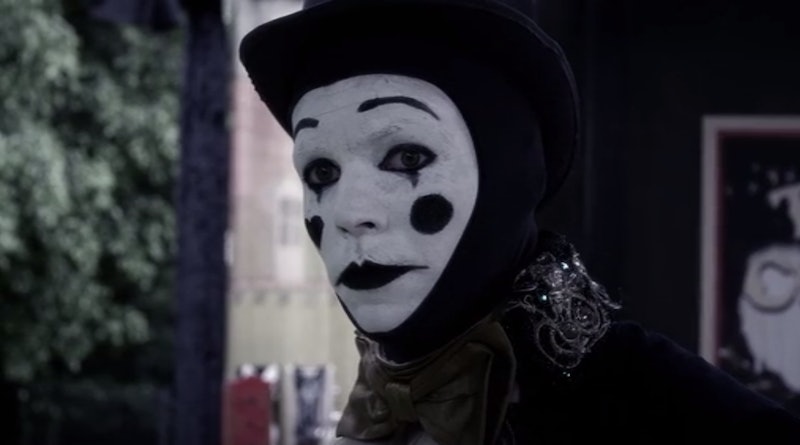 We are eagerly awaiting the Season 6 premiere of Pretty Little Liars, but we don't have to wait for new episodes to start gathering clues about the A game. Being a PLL fan is an exercise in sleuthing, and one of the best ways to put the pieces of this intricate puzzle together is to re-watch older episodes of the series. There are clues about Big A's identity hidden across every single season of Pretty Little Liars, long before we ever heard the name Charles DiLaurentis. One specific episode ripe with hints about Charles is the Season 4 midseason finale, "Now You See Me, Now You Don't." We could have seen Charles' master plan coming a whole season before it went down.

In "Now You See Me, Now You Don't" Hanna, Emily, Spencer, and Aria receive threats from A — but this time, it's not their life on the line. A sends the girls a miniature coffin with a "Mona" doll inside it. It's not the only gift they receive. A also sends along a box with a saw inside, urging them to meet the crazed stalker at a magic show in the haunted town of Ravenswood. When they get there, they come across Cece dressed as Red Coat, a lair that could belong to A, and the biggest clue that Ali has been alive this entire time. We've solved many of these mysteries (Cece was helping Ali and that secret lair belongs to Ezra, not A), but that doesn't mean this episode doesn't hint at bigger things. Here's how the episode foreshadowed some major events from Season 5.

Mona had just checked out of Radley in this episode, and was "missing" when the girls received this horrifying box, along with a note telling the Liars that the police will assume they murdered Mona. At the time, everyone was unsure as to whether Mona was messing with them or whether she was really A's latest victim. We learn later in the episode that, despite A's threats, Mona was never really dead — she was at a bed and breakfast just outside of town. Clearly A's plan was always to frame the girls for Mona's death, but perhaps he had to wait for the girls to lead him to Ali before he could go through with it.

Shana Could Have Been Working For Charles

Shana knew where Mona was, and the two girls seemed to have an alliance. Of course, this was back when we thought that Ali and Shana were also on the same side — and Shana totally played the girls. Could Ali's childhood friend have watched over Mona under the guise of keeping her safe, but was really keeping tabs on her for Charles?

Wren Is Definitely Connected To All Of This

Wren pops in and out of the girls' lives so often, it's hard to remember exactly what shady things he's guilty of. Shana dropped this while running out of the Brew, and it hints that she's connected in someway to the not-so-good doctor. If Shana is really tied to Charles, does that mean so is Wren? Could Wren secretly BE Charles?

There's A Direct Clue To A's Name In The Episode

Even showrunner I. Marlene King has tweeted about the Great Charlemagne and the similarities between his name and Big A's real identity.

Does this magician look at all familiar? Who knows when we might see him again...

Aria's "Word Of The Day" Might Be A Hint

She's talking about Ms. Grunwald's psychic abilities and questioning whether or not she's a fraud in this scene, but isn't "charlatan" just a little but of an odd word choice for a 17-year-old? I'm not in the camp of Aria being A, but I wouldn't be surprised if the writers snuck "Charlatan" into the episode to hint at Charles' presence in Season 5.

Hanna Got It Right

Hanna may be in Ezra's lair, but she's not wrong about A being male. The show often framed A as a woman, so to have a character explicitly bring up this possibility is definitely a hint.

This May Not Be Ezra

After Ezra is revealed to be the one in the black hoodie, the episode cuts to a man dressed in this World War II soldier attire. Most people assumed that this masked man was Ezra, and though Mr. Fitz is wearing the same outfit, we never actually saw him physically putting on the mask. So I think it's fair to consider the possibility that someone else was behind it — possibly to frame the already suspicious Ezra for their actions. In the next episode, the masked man becomes our ultimate villain as he attacks Spencer, and given that Ezra was revealed to be an opportunist, not a mad man (he's writing a book on Ali, not trying to kill her), I doubt he was the one in this mask. This looks like the work of Charles.

The Charles clues are out there. Now we just need to put them all together Pretty Little Liars returns.