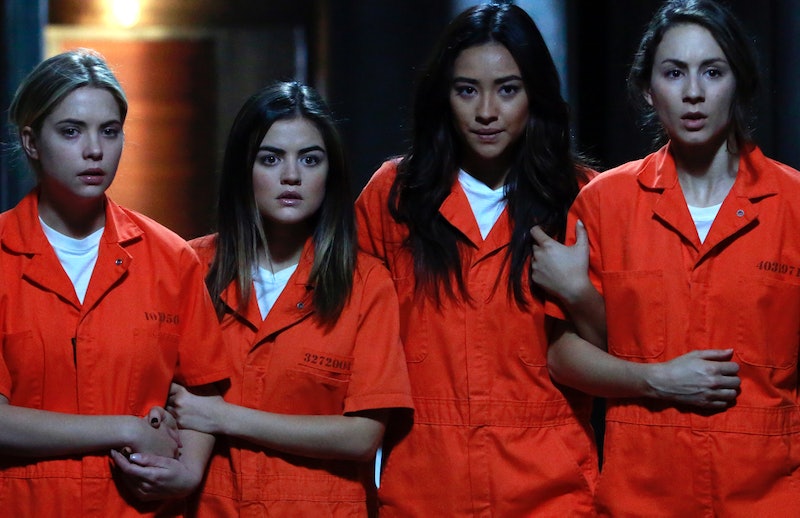 After five long seasons of waiting, including a few especially torturous weeks of dramatic teases, Pretty Little Liars' Big A Reveal came in "Welcome To The Dollhouse." Yes, during the Season 5 finale, the series finally gave fans the answer to the question we've been asking everyday since June 8, 2010: Who is A? Despite all the time we had to prepare and various theories that pointed to similar conclusions, I don't think any of us were actually ready for the answer we were given, as PLL revealed that Charles DiLaurentis is A AND Jason's twin. I'll give you a minute to collect yourself, though no amount of time could possibly be enough.

Weeks after fans decoded Mona's anagrams, Spencer finally figured out the name Charles, while trapped in a truly terrifying dollhouse by A himself (yes, we finally know for sure that A is a guy). And even though PLL didn't give us everything we wanted by actually unmasking A, they revealed an extremely juicy tidbit. After shutting off the power to the dollhouse from hell, the Liars tried to escape, and in the process, Spencer stumbled across a new room. In it, she found home movies of the DiLaurentis family, including one that showed Jessica DiLaurentis telling two young, blonde boys who looked pretty darn identical, to say goodnight to their baby sister, presumably Alison.

Yes, technically A could still be many people, as we never saw Charles face and had never heard of him before these anagrams, but we are one huge step closer to finding out who has been behind these five seasons of torture. Of course, because this is PLL, many more questions have been raised. Luckily, Season 6 will be back this summer, hopefully with the answers.

More like this
The 'PLL: Original Sin' Creators Say A’s Identity Will Be “Very Clear” By The Season Finale
By Alyssa Lapid
Every Horror Movie Reference In The 'PLL: Original Sin' Premiere
By Alyssa Lapid
Everything To Know About Netflix’s 'Never Have I Ever' Season 4
By Jack Irvin and Gabrielle Bondi
'Children of the Underground' Subject Faye Yager Now Runs A North Carolina B&B
By Brad Witter
Get Even More From Bustle — Sign Up For The Newsletter