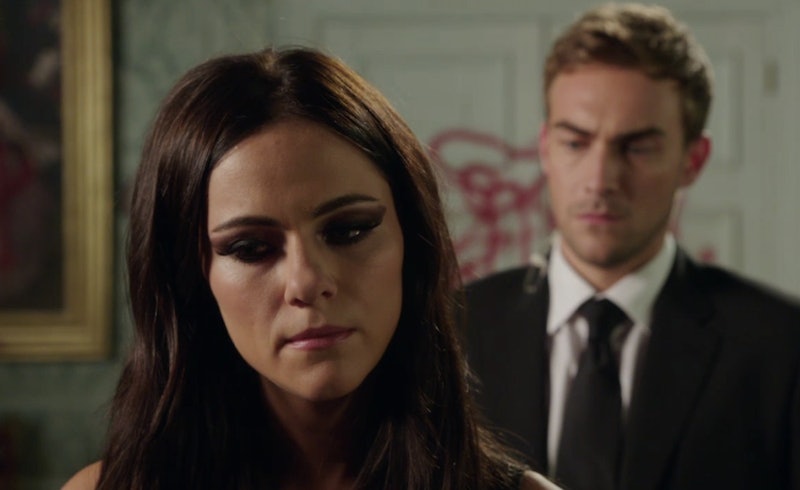 It's been a painful and tragic few weeks for fans of E!'s The Royals, but there's one thing we can all trust — the likelihood of the series' OTP making a comeback. In the midst of The Royals Season 1 finale, Jaspenor reunited after the Princess sprung her former bodyguard from jail to the sweet, sweet sounds of Hozier. The reunion was far from romantic and Eleanor clearly hasn't forgiven Jasper for sleeping with her mother, but can Jaspenor get back together on The Royals Season 2? If Alexandra Park, who plays the most badass princess on television, has a say in it, absolutely. "I think they do really care about each other at the end of the day," Park tells Bustle, "I’m interested in what they’re going to write for Season 2."

For the actress, Eleanor and Jasper's relationship is all about the "little moments in-between" and, well, the fact that it's really impossible to get bored while watching them. "It’s not always that you see the nice looking guy who’s the smart one at school that meets the girl-next-door and they have this la-di-da lovely time," she says, "It’s like, that’s boring, I’m bored, goodbye." Jasper and Eleanor couldn't be any farther from that type of couple, which is probably why they've quickly become a fan-favorite.

"The response from fans has been so excited but conflicted in following Jasper and Eleanor because it’s been written so well," Park says. And it's truly not lost on her how unconventional their relationship has been from the beginning. "It is complex and it is screwed up. It’s not normal, it’s very weird," the actress tells Bustle, "But, I think that’s life, that’s how life is." That might seem like an understatement for this couple that's spent most of their relationship trying to one-up each other in terms of having the upper hand over the 'ship. And, well, Jasper did sleep with her mother.

But, stashing guns in Eleanor's bedroom and sleeping with the queen aside, those little moments that have drawn fans and Park to Jaspenor are also what draws the Princess to her bodyguard. "She doesn’t trust anyone — she rarely takes her mask off in front of anyone and when she does, it’s for a reason," Park says. So, what does that mean for this 'ship in Season 2? Well, if Park is still interested, I sure as hell still am too and I can't imagine a Royals fan would disagree.