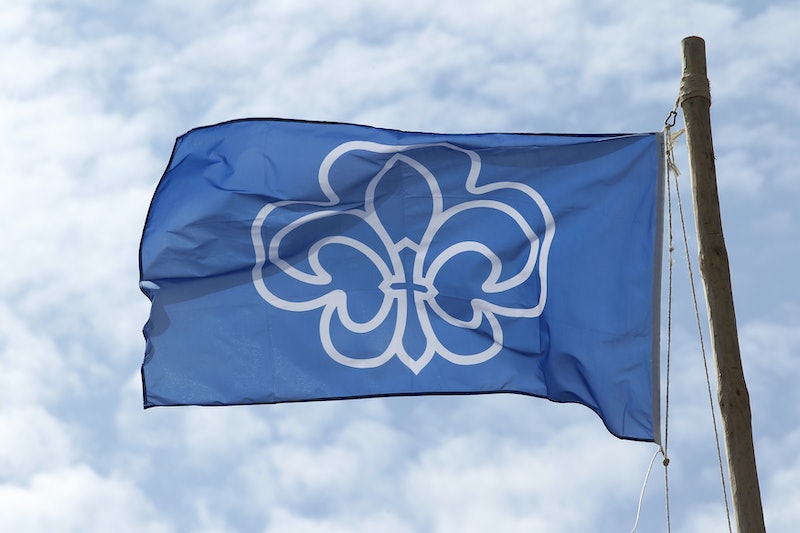 It's hard to imagine anyone having a problem with the Girl Scouts, but apparently such people do exist. Right now, conservative groups are upset about the Girls Scouts' inclusion of transgender scouts, for instance. Because I guess it isn't enough to try to restrict the rights and freedoms of adults; people have to try to other and exclude kids, too.

The Girls Scouts first made headlines for accepting trans girls as scouts in 2011, after a Colorado girl was initially barred from joining a local girl scout troop only for the state organization to step in and say that the associate responsible for this decision acted in error and was unaware of the official policy on the matter. The girl in question was ultimately allowed to join, and the issue caught national attention.

Nearly four years later, conservatives have once again gotten upset about the issue after what they are calling a "dangerous" policy update makes it explicitly clear that trans girls are welcome in the organization.

Placement of transgender youth is handled on a case-by-case basis, with the welfare and best interests of the child and the members of the troop/group in question a top priority. That said, if the child is recognized by the family and school/community as a girl and lives culturally as a girl, then Girl Scouts is an organization that can serve her in a setting that is both emotionally and physically safe.

Which as far as policies goes, is pretty good. It allows scout leaders the latitude to assess what's best in individual cases, but also makes it crystal clear that girls who openly and consistently identify as trans are to be considered girls. It could be more strongly worded to make explicitly clear that trans girls should be welcomed, but it gets the point across.

Which, of course, has some people angry. Because even an awesome organization like the Girl Scouts has haters.

After getting wind of the policy, the American Family Association, one of the nation's largest "pro-family" organizations, has started a petition asking the Girl Scouts not to allow "boys dressing as girls" to join, saying that the new policy "will put young innocent girls at risk." This, of course, is an old refrain — people make the same argument to keep trans women from using women's restrooms, despite the fact that there is no evidence that this poses a risk to cisgender women's safety.

(Also, why is it that some people refuse to believe that women have every reason to be afraid of men when it means doing something about violence against women but are totally on board to say men are an inherent threat when it comes to trans women using a restroom?)

The American Family Association petition also states that the new policy "means girls in the organization will be forced to recognize and accept transgenderism [sic] as a normal lifestyle" and claims that the Girl Scouts of America has "lost its moral compass." Conservative news sites have taken a similar view. Breitbart referred to the trans-inclusive policy as "[welcoming] cross dressing boys," while One News Now quips that "'girl' is now optional" for Girls Scouts. Very clever guys. Totally inaccurate, but still, so original.

This is not the first time conservatives have taken issue with Girl Scouts. Among anti-abortion groups, in fact, "CookieCott" where people boycott Girl Scout Cookies, is an annual event. I guess it just goes with the territory when you're an organization working to instill young girls with "courage, confidence, and character." If there's one thing the past fe thousand years of Western history has shown, it's that anyone looking to empower and support women — all women — is bound to get plenty of push back from patriarchal culture.

So keep being awesome, Girl Scouts! We're all rooting for you!