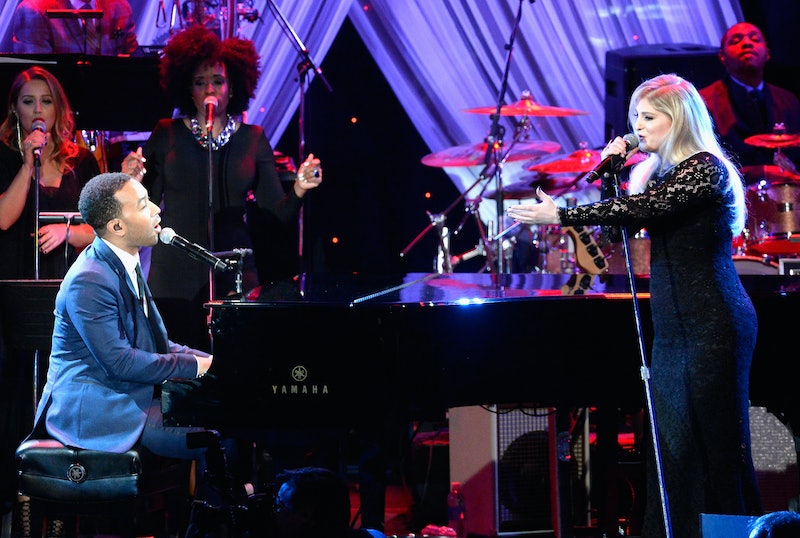 Meghan Trainor has ruled the radio with her hit singles "All About That Bass," "If Your Lips Are Moving," and "Dear Future Husband." Earlier this year, John Legend added an Oscar to his awards mantle when he won one with Common for their moving song "Glory" for the film Selma. Those two big names recently joined forces for the song "Like I'm Gonna Lose You," which Legend and Trainor performed at the Billboard Music Awards on Sunday night. The duo were amazing during the soulful ballad, which is from Trainor's smash hit album Title.

Coming after rocking performances by Van Halen and Nick Jonas, Trainor and Legend slowed things down a bit with the new song. Trainor opened the performance in an elegant glitter skirt, singing on the stage solo. Then, Legend came in with his silky smooth voice to take the song home. During the song's guitar solo, Legend twirled Trainor. Could this man be any more perfect? No. Could they go any better together? No. Even Billboard Music Award host Chrissy Teigen (and Legend's wife) noticed the duo made a good combo. "Wow you guys had a lot of natural chemistry up there," she remarked after the performance. "I'm a little jealous."

According to an interview with MTV News, Trainor had written the song a few years ago, and it was her uncle and her management company that encouraged the recording of it — as well as who recruited Legend to collaborate on it. "And I thought because it wasn’t shoo-wop vibey, I blanked out, and the girl, my manager, listened to it and started crying and she’s like ’You know you’ve got to cut this, right?'" Trainor said. "So then I cut it, I produced a version with my friend, and they sent it to John because he’s on my management company and he’s like 'I love this I want to be a part of it.' …It’s gonna be cool."

And it certainly was very, very cool.

More like this
Will Beyoncé Be At The BET Awards To Perform “Break My Soul” Or Attend The Show?
By Jake Viswanath
Zooey Deschanel Can't Be Anyone But Herself
By Samantha Leach
Sadie Sink Would Escape Vecna From 'Stranger Things' With This Taylor Swift Song
By Grace Wehniainen
Kanye Joked About His Divorce To Kim K In A Surprise Speech At The BET Awards
By Alyssa Lapid
Get Even More From Bustle — Sign Up For The Newsletter