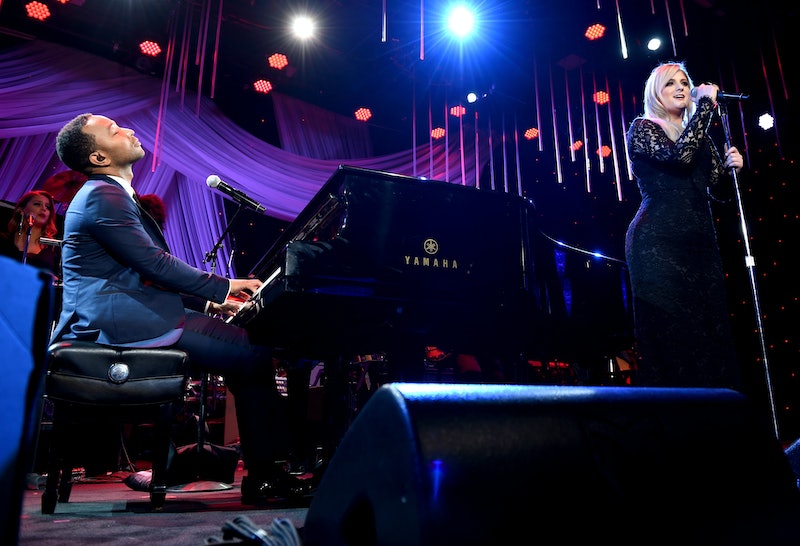 There's nothing like an awards show to bring musical artists together that you don't normally associate with one another. For example, Megan Trainor and John Legend will duet at the Billboard Music Awards. Wait, what? If you've been on the fringe of Meghan Trainor mania, as I have, it might surprise you that she and the Academy Award-winning R&B artist are collaborating at the Billboard Awards. However, keen fans already know that John Legend is featured on Meghan Trainor's track "Like I'm Gonna Lose You," which is on her recently released studio album Title. So this isn't exactly like Legend's performance with Jordin Sparks at the 2012 Billboard Music Awards, when the two came together specifically for a tribute to the late Whitney Houston. Trainor and Legend of them have actually worked together in the recent past.

If you haven't heard the song, it's basically the perfect school dance slow jam. Just listening gives me some major awkward flashbacks. The sound is exactly what I would expect from the two of them, actually. Trainor may be known as a pop artist, but she has a soulful, retro voice that goes well with Legend's signature style. It's also very sweet, and presuming that this is the song that the two will be performing at the Billboard Music Awards, it should be a nice change of pace for the evening's proceedings.

This is a pretty smart move on the show's behalf. Not only has John Legend been having a phenomenal year with "Glory," his collaboration with Common for the Selma soundtrack, but it gives the Billboard Music Awards a collaboration that they can advertise without the artists having to rehearse new material. However, will they sing anything else? One can only hope. Like I said, the two of them sound good together. I'd love to see her take on one of Legend's familiar tunes as well, like Britney and Rihanna's well-remembered 2011 performance. Chrissy Teigen is hosting the ceremony, after all. You'd think her husband would get his fair share of stage time.

Other performances for Sunday's awards include Fall Out Boy featuring Wiz Khalifa, the cast of Empire, Faith Hill, Chris Brown and Pitbull, Tori Kelly, as well as Imagine Dragons. It's shaping up to be a fun night!

To get your mind ready, here's a live performance of the song with Trainor and and Nathan Sykes. Or you can just buy the album and take a listen for yourself. Either way, I can't wait to hear John Legend's live take at the Billboard Music Awards!