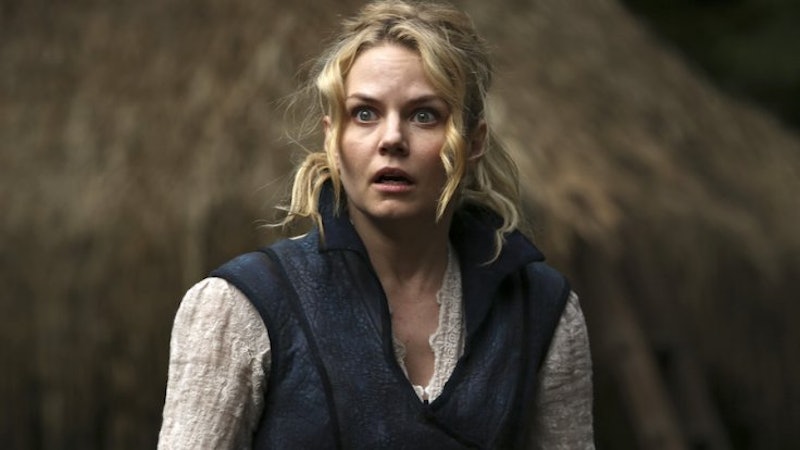 During the Season 4 finale of Once Upon A Time last weekend, the seemingly impossible happened: Emma Swan went dark — and that's an understatement. To save Rumple's/Gold's blackening heart from the darkness, and then to save Regina from being devoured by that darkness, Emma made the ultimate sacrifice in taking it upon herself to become the Dark One. It's a heavy burden for the character to bear, sure, but what about the show's fans? We have to wait all summer now to figure out how in the world they're going to get Emma out of this mess and whether anyone in Storybrooke has even the slightest chance at a happy ending.

In the months leading up to the Season 5 premiere (a date for which hasn't been set yet), we've got plenty of time to think about the state of affairs as we left them at the end of Season 4. Emma's the new Dark One, sure, but what does that mean for her and more importantly, for everyone else? How will it affect the town's residents and how their storyline develops. Basically, we've got more questions than we have answers at this point. One thing's for sure: It's going to be a long summer.

Is Emma really going to be all that evil?

I mean, I know Gold did some dastardly deeds as the Dark One, but was that because that's what the darkness does to you or because he used to be the underdog and he let vengeance and the power he held consume him? Probably a little bit of both, but considering that Emma has light magic and is intrinsically good, could it really be all that bad? (Probably yes.)

How will Emma get out of being the Dark One?

Emma took on the role of the Dark One in order to save Regina, and she did it with the hope that somehow, they'd find a way out of it. The darkness always needs a vessel in which it can be contained and for now, she's it, and she'll probably spend the majority of Season 5 in that role. But how will she get out of it? Because she totally has to, right?

What are they going to do with Zelena?

At the moment, Zelena is locked up in a Storybooke underground bunker, pregnant with Robin Hood's child. Regina may have spared her life by not having the Author write her out entirely, but she's going to have a baby and she'll eventually get out of that cell. So what now? They'll have to do something with her.

Will Gold just go back to being Rumpelstiltskin?

Emma took the darkness from Gold in order to spare his life, since the dark deeds he'd performed for years had turned his heart nearly entirely black. He's no longer the Dark One, so does that mean he just goes back to being plain old Rumpel with no magic and no power (and full health)?

What role will Lily play now that she's in Storybrooke?

I doubt we spent all that time tracking down Maleficent's daughter, Lily, in Season 4 and bringing her all the way back to Storybrooke, only for her to fade into the background. She's got a lot of character development left to go through, and given her connection to Emma, who's also dark now, I feel like we may be in for some crazy adventures in Season 5 with the old Lily/Emma duo reunited.

What will Henry do as the new Author?

Henry managed to undo the Author's terrible story where the villains are heroes by becoming the new Author himself and using the Heroes & Villains version of Regina to save the day. And while Henry knows the responsibility he shoulders is a big one, his job as the Author is to write. The question is: What is it that he WILL write?

Who will be the new savior?

Emma was the savior, but now someone needs to save her — so who's going to step up to the plate? My guess is (and my hope is) Regina. She's been the villain for so long, but she and Emma formed an amazing team in Season 4 and since Emma saved her from being consumed by the darkness, Regina needs to find a way to do the same for Emma.