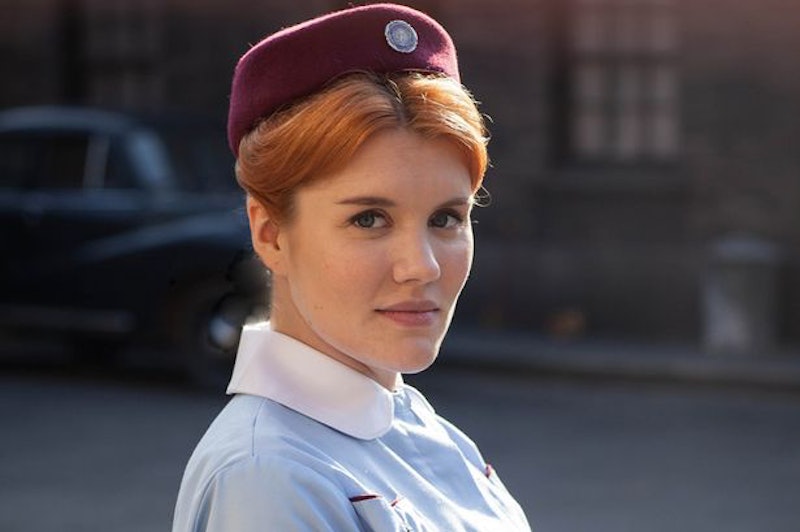 When Jenny (Jessica Raine) left Call the Midwife , I was bummed to say the least. She was the show's central character, but I knew Call the Midwife had enough awesome women to fill the void left behind. Then Chummy (Miranda Hart) was around Nonnatus House less and less, and Cynthia (Bryony Hannah) left the House for an extended time to become a nun. On any other show, so many cast turnovers would have left me feeling bleak, but Call the Midwife had Nurse Patsy (Emerald Fennell) waiting in the wings. And Patsy? Well, Patsy is amazing.

Introduced in Season 3, Patsy's story unfolded slowly— and there is still so much left to learn about her. What the show revealed so far has painted a portrait of the kind of character viewers can get lost in. Patsy has been through war, loss, and more personal struggles than should ever be heaped onto one person. She is also Call the Midwife's first regular LBGT character. Patsy has not come out to her friends because she lives in the East End of 1960 London. Just admitting who she really is could be dangerous for Patsy, but she still lives her life on her own terms. Even though Patsy has only been a part of Call the Midwife for two seasons, I cannot remember what the show was like without her. She is my new favorite, and here are seven reasons why she should be your fave too:

Because She Brings Her Own Whiskey

Patsy is anything but naive. She is a grown woman who not only holds her liquor, but shows up to Nonnatus House with whiskey in hand. Trixie was instantly won over by her new roommate, and so was I.

Patsy spent time in a Japanese concentration camp when she was a child. She lost both her sister and mother there. An experience like that could bury a person, but Patsy decided to become a nurse to honor her family's life by saving others. She is a fighter, and there is nothing she cannot get through.

Because Her Dry Wit Is Flawless

Trixie cracks amazing jokes, but Patsy's brand of razor sharp wit is underrated. Not only can she drop the mic with the best of them, her dry humor keeps everyone's spirits up when life becomes overwhelming.

Because She Is A Feminist

Patsy is progressive by nature. She wants equality for herself as a lesbian, but also as a woman. She has worked side by side with men and she is under no illusions that they deserve preferential treatment. Her opinion on the matter can be summed up in one perfect quote: "I don't think girls are the equal of boys. I think they're better."

Because She Is A Great Friend

The reason why Patsy fit in so seamlessly at Nonnatus House is because she is a truly wonderful friend. Her bond with Trixie is extra special (Patsy stood by Trixie throughout her horrible breakup), but there is not one woman in the House whose back Patsy does not have.

Because She Loves With Everything She Has Got

Patsy and Delia are a beautiful couple. When it comes to the rest of the world, Patsy is always unwavering and strong. When she is with Delia, Patsy's heart is completely open. She loves purely with every ounce of energy she has even though she knows the world would not approve of her relationship. Patsy doesn't care because she wants a brighter future where she can express her love without fear, and she is willing to fight to make sure that future exists.

In Season 4, Patsy was put in a position where she could have been outed for standing up for a gay man who was arrested. Even though she did not truly know the man, she was unwilling to stay quiet when the entire neighborhood turned on him. Patsy put her own life at risk to fight for what was right without thinking twice about it— how can you not completely fall for a character with so much ferocity?