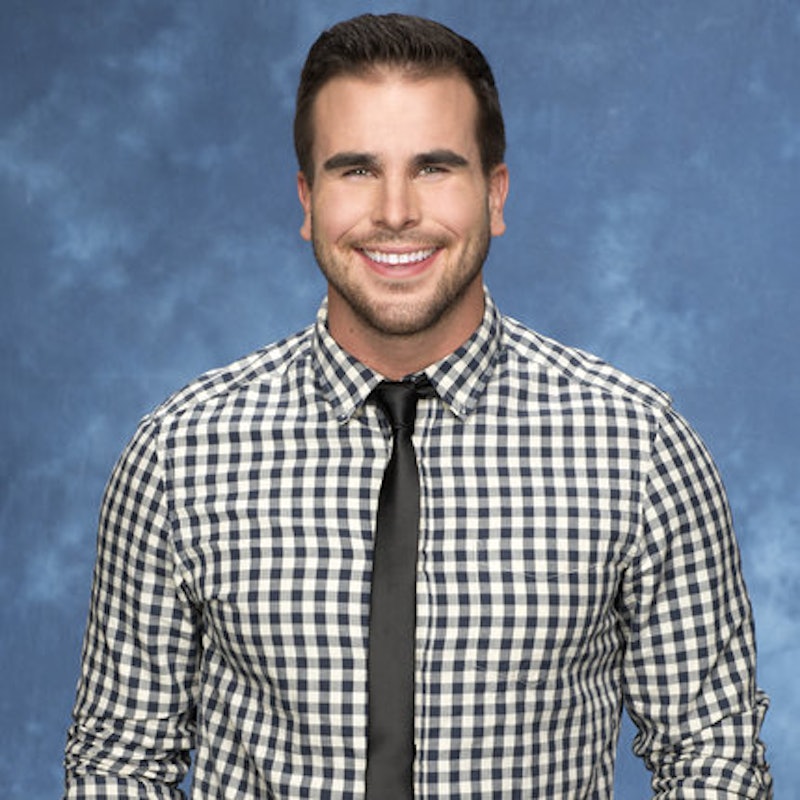 Nearly every season of The Bachelor and The Bachelorette gives us a controversial contestant, and even though The Bachelorette doesn't premiere until Monday night, it's pretty obvious who this season's will be. On The Bachelor, ABC milked the fact that Jade Roper posed for Playboy for all its worth, and on The Bachelorette , exotic dancer Josh Seiter is poised to take her place. Yep, according to Josh's ABC bio, that's his job, and where Jade tried to keep Playboy hush hush until hometown dates, if his social media accounts are any indication, Josh is planning to take the opposite approach.

ABC touts Josh as a "law student/exotic dancer," and a little bit of research easily reveals that the exotic dancer part, at least, is right. Although at work, Josh doesn't go by Josh; instead, his stage name is Andrew Dean. Law student Josh by day, and stripper Andrew Dean at night — essentially, he's like the male, R-rated version of Hannah Montana, living double lives. And speaking of his double lives, The Bachelorette isn't Josh's first stab at reality TV. Last summer, Josh was on E!'s Escape Club where he competed for a yearlong paid vacation from work.

But after that vacation, Josh went back to his roots. He's still in the game as part of Chicago's male dancer group Dreamboys , made up of guys equally as buff and as beautiful as Josh. And if ABC plans to milk Josh's history on the show like they did with Jade, the Dreamboys are already planning to milk them right back. (Can I say that in a harmless article about TV?) Check out what appeared on Josh's Twitter earlier this month:

I love that Josh wasn't knocked out of consideration by ABC's casting department because of the non-traditional way he brings home a paycheck. Josh/Andrew is clearly good at what he does and seems to enjoy it, so more power to him for that.

It's definitely going to be interesting to see how Josh's job plays into his time on The Bachelorette this season. As another kind of dancer, I feel like Kaitlyn could totally appreciate what he does, and Britt's pretty easygoing, too. Chris Soules might not have been totally prepared to find out that Jade posed for Playboy, but this is a brand new ballgame. And if Josh's dance group decides to make a guest appearance in some sort of Magic Mike-themed surprise, I wouldn't hate it.