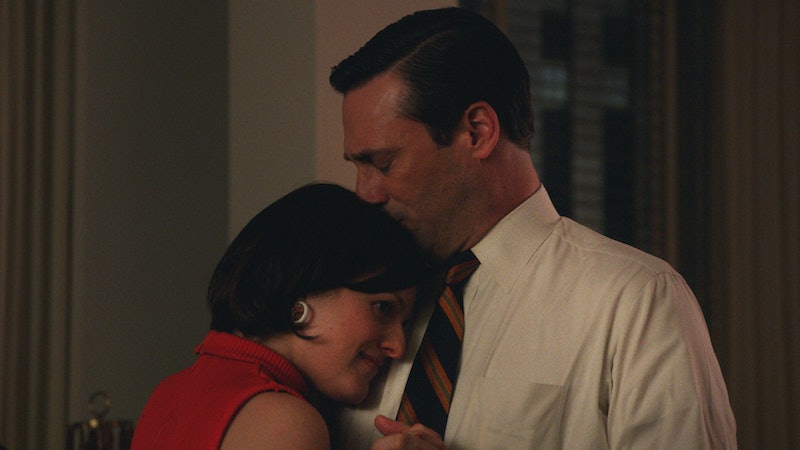 The end of Mad Men is bringing about all sorts of feelings, and no one's safe from them, not even Don Draper. As he once again finds his life in flux, he picks up the phone and he calls his girl Peggy. Why does he call her? What does he want out of the conversation? Is this really their goodbye forever? Those questions aren't answered, but in the short time they're having a person to person conversation Don and Peggy are able to connect, like they've done so many times before. Is it a heartbreaking phone call between the two of them? Hell yes. Excuse me, but I think a bug just flew into my eye while I was cutting all these onions. Totally not crying over the Mad Men series finale. The theme of this episode is person to person telephone calls. Don picks up the phone, and calls Peggy. She immediately reminds him that he can come home, because he can always come home. Does she mean that advertising is his home, or is Peggy trying to tell Don that wherever she is, he's home? These two have been through so much together, so I like to think that they've got this great relationship, and wherever the other is, that's home.

"I messed everything up. I'm not the man you think I am," Don whispers to Peggy, and it's time he came clean to her about what he's done so far in his life. Peggy, though, doesn't realize what's happening. She doesn't know another Don Draper — she's never met Dick Whitman. Don presses on, trying to explain to her who he really is. "I broke all my vows. I scandalized my child. I took another man's name. and made, nothing of it." "That's not true," Peggy says back. It's one of those super awful and awkward moments, because we know it is true, but Peggy is always trying to see the good in Don. In fact, Peggy can only see the good in him, no matter what. This is why I love Peggy so much. Then to really break my heart into a million more pieces, Don says one last thing to Peggy, "I only called because I realized never said goodbye to you." That's it. There's a click on the phone and Don is gone. Damn, these onions are getting to me. Image: AMC