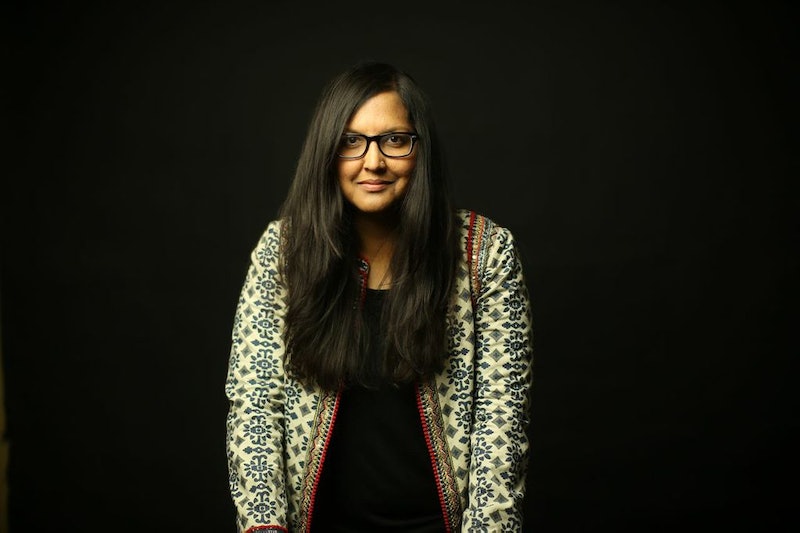 Singapore-born and Wyoming-bred short story writer Nina McConigley is a painter of many landscapes. Her short story collection Cowboys and East Indians (Five Chapters) depicts the wide open land of Wyoming, the crowded streets of India, and the friction that occurs when these worlds meet.

With detail and wit, McConigley portrays the Western world through the eyes of Hindus and Christians, vegetarians and meat eaters. The title story focuses on Faith Henderson, born Ranjani, who was adopted from an orphanage in Chennai, India, and raised in Wyoming. Loved by her adopted parents but nevertheless alienated in Wyoming, Faith is thrilled to meet young college students from India. She hadn't even tried Indian food, let alone celebrate Diwali, but when they invite her to their celebration in a community center on campus, she's very excited.

I had spent nights learning the stories of the Ramayana off the Internet. I knew it was Hindu New Year. I was Hindu once. I even was trying to teach myself some of the prayers I found on religious sites. I had downloaded a recipe for tandoori chicken, bought the sauce from the Whole Earth Grainery on Ivinson.

But try as she might to tap into what she believes are the important tenets of the holiday, Faith finds she feels like an outsider among her new friends. She wears a sari over her jeans (she lacks the top and skirt that accompany it) and is embarrassed to find out her chicken is inedible to her vegetarian friends. She knows nothing about the Indian movie stars and cricket matches everyone discusses. Just as Faith struggles with her own identity as an immigrant, she struggles to feel welcome among immigrants who grew up in India.

McConigley answered our questions about Wyoming and her own experience as an immigrant in Wyoming.

BUSTLE: What went into your process for crafting these stories? What research?

NINA MCCONIGLEY: I worked at the largest newspaper in Wyoming, the Casper Star Tribune, for a while before I did my MFA. The truth is stranger than fiction — I was always cutting out articles of things I thought were interesting. I think I mixed that together with my own life experiences. There are so few East Indian families in Wyoming — we often met other Indians in odd situations that weren’t social ones. So all of that was brewing before I sat down to write the first story. Also, Wyoming is pretty amazing in terms of inspiration.

I read that the llamas you describe in "Cowboys and East Indians" are based on real llamas.

I love all the ranches here that use llamas. They look so crazy when you see them out on the prairie. I had done a field research trip to study trout up in the mountains, and we used llamas as pack animals. They were such odd creatures. They held a lot of equipment, and easily navigated the paths. I knew a llama would somehow show up in a story.

So are the characters based on people you know or stories you've heard?

I think every story in the collection has some element of autobiography. So yes, there are character tics and things I have based on people I know.

You beautifully capture the Wyoming landscape. What do you most love about living there?

How much time do you have? I love the open spaces, the quiet. I love that you can drive out of town and be in prairie and sagebrush in minutes. I love looking across sage flats and seeing mountains. I love that you tend to know everyone, and the whole state is like one small town. I like the wind and aspens. I love the geology and that I see antelope most mornings.

You were born in Singapore; have you visited since?

We moved from Singapore when I was a baby. But my aunt lived there, so growing up, we went back and visited. It’s the opposite of Wyoming in every way — especially in terms of space.

When I am there, the first thing I love is the food. Oh, Singapore is just such a food heaven. But I really appreciate the mix of cultures, the orchids, and that it is so wildly different from here. I really hope to spend more time there in the future. It feels like an unexplored part of my life.

If you could say one sentence to any person, living or dead, who would it be?

I would talk to Agatha Christie.

What would you say?

“What was going on in those 11 days you went missing?” She is one of my writing heroes.

Throughout your stories, you tap into the idea of the "exotic." How is the exoticism of something determined? Why are these llamas exotic — why do they intrinsically look out of place?

For me, I find the word exotic very problematic when it’s used the in context of talking about people of color. When you think of exotic, most people think of something that is foreign, from another part of the world — but to me it means you are different, you are other. I wanted in the title story for Cowboys and East Indians to talk about that. And so I wanted a story full of weird connotations of the exotic — pets, the llamas, and then how that lens then is on the main character. The llamas are exotic as they are not native to the Wyoming landscape. The characters are the same. But yet, they fit in and adapt. I wanted to explore those ideas around a word that has been hard for me for years.