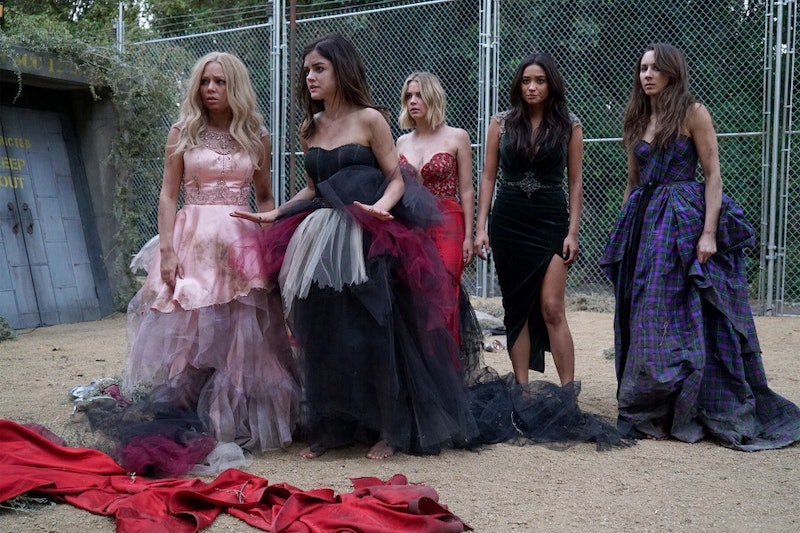 Just like there are a million A suspects on Pretty Little Liars, there are also a million A theories. But to anyone obsessed with Pretty Little Liars, theories aren't reserved to trying to figure out A's true identity and motives. There are a ton of theories out there that offshoot from the greater A mystery, and if I had a dollar for every single theory I've ever obsessively read and cross-referenced, I'd be a millionaire. If I had a dollar for every single theory that I've personally formed, I'd be able to buy us all a huge dollhouse, and we could live there together and talk about Pretty Little Liars until the end of time. Of course, we'd spend our days coming up with even more theories, which is a very, very complex process. So what exactly are the stages of developing a PLL theory? It's not a task for the faint of heart.

Coming up with any theory, let alone an A theory, requires hours of dedication — mostly spent re-watching episodes, speculating, and then searching Tumblr for gifs. Below, I've broken down the stages that I go through when I'm developing one of my own theories, that my fellow fans should relate to. All theories might not be created in the exact same way, but they all go through these eight stages before they're ready to share with the world.

1) Realize That There's Something Bugging You About PLL

It might be from an episode you recently watched, or an episode you watched months ago. But for some reason, there's something stuck in your brain about one tiny little thing. Is it the color of Aria's shirt? Is it the way Emily rolled her eyes at Hanna? Or is the fact that Melissa showed up just as chaos was starting to hit the fan?

Oh, and don't even get me started on Wren. You can form 15 theories about him after one 30-second scene.

That may not be how addition works in the real world, but when you're talking PLL , A is always at the very end of the equation. During this stage, it's best to clear off a wall of your room and get some red string and push pins out, so you can create a giant web of A mysteries. Or you know, you can just think about it in your mind if you're worried your roommates might get freaked out if you turn your living room into a PLL war zone.

Either way, suddenly something about B starts to make sense in regards to C, and then D, E, F and G all line up in place. They all point back to A.

3) Casually Ask Your Friends If They Agree With You

This is the first stage where you might think you're going crazy. Are you the only one who's noticed this over the past few episodes?

Mention to your friends that you've got this PLL idea, and see what they think. Do they agree? Do they think you've lost it? OR do they totally understand what you're talking about and support your speculating 100 percent? If the latter, you've got a winning theory brewing.

Time to go check in with your 500+ online PLL friends who love to think about this stuff as much as you do. Maybe one of them has thought of this before, so now's a great time to bounce some ideas off of them. Maybe someone else on the Internet has already disproven your theory.

This is the time to start digging around for all of the evidence already out there.

Marathon time. The only way to really formulate a proper hypothesis for your theory is to watch at least one episode of PLL. Of course, that that will probably lead to another, and then another, until you have accidentally re-watched the entire third season.

But hey, your theory makes so much more sense now!

6) Decide That Your Theory Totally Has Legs

Everything makes sense. You can't find any holes in your theory (or, at least any episodes haven't disproven it yet). Start yelling your theory from the rooftops (or Twitter) to whoever will listen to it, because you did it. You unwrapped and solved a PLL mystery.

7) Revel In Your Accomplishment

High-fives all around. This is what it means to be on top of the PLL game, and you did it.

Oh. Well, it was nice while it lasted, right?