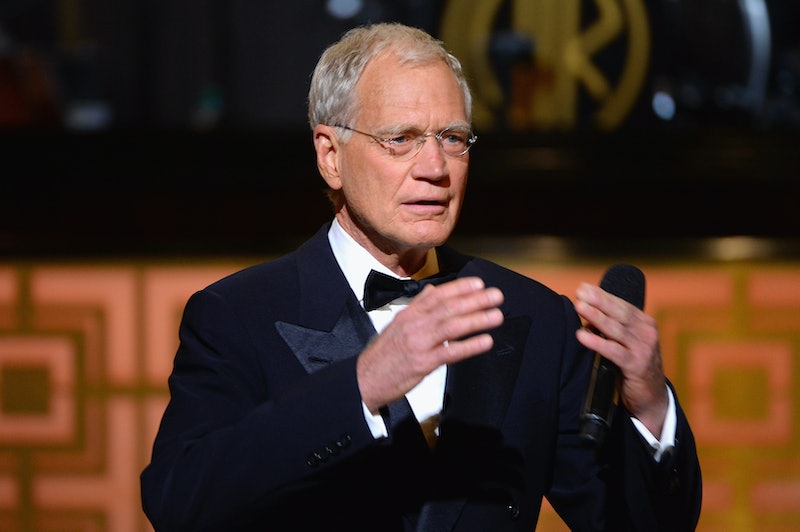 Wednesday, May 20, marks the end of David Letterman's 22-year tenure on The Late Show. Similarly, Jay Leno of The Tonight Show retired from his post after 22 years back in 2014. If you're a child of the millennium, you may not remember the days when these two late night television hosts had some reputed bad blood — blood so bad it has inspired books that have been turned into movies! Why did David Letterman and Jay Leno have beef with each other, exactly? Let's take a sojourn back to the 20th Century to investigate.

Letterman and Leno actually used to be buddies in the old days, according to Letterman. "We were always friends before all of this happened," he said in a 2012 interview with Oprah Winfrey. He continued on to call Leno one of the funniest and simultaneously most insecure people he knows in virtually the same breath. I do say, calling someone great and totes insecure at the same time sounds like some serious frenemy-speak. But when he says "all this," what exactly is he referring to?

It would seem that Letterman is talking about an episode that happened in the early '90s referred to as "The Late Night Wars." In 1991 when Johnny Carson retired from his post on NBC's Tonight Show, it was believed that Letterman, who hosted Late Night With David Letterman on the same network, would go on to fill the role. But in a somewhat surprising turn of events, Carson named Leno his successor instead. This is considered the root of their supposed long-time frenemy-ship.

Two years later, Letterman was given his own show, The Late Show With David Letterman, that would air on CBS during the same 11:35 p.m. time slot as Leno's The Tonight Show. This scheduling naturally put the two in competition with one another, but the late night hosts remained pretty diplomatic about each other in the press.

As ABC reports, Leno told the Associated Press in 1991 that he didn't have a problem with Letterman, and that he believed there was room enough on the airwaves for both shows. Also, it's important to note that Letterman reportedly congratulated Leno for landing the gig in a press conference, and showed no apparent signs at being miffed over the issue.

Then for years, nothing really happened. Letterman spoke to Oprah (with whom he also had reported beef) about the supposed rivalry between himself and Leno, but didn't go into great detail and mostly praised him. Then, in 2010, they made a Super Bowl commercial that poked fun at their alleged hatred of each other. But the fact that they can stand each other enough to film an ad together is evidence that things are probs not all that bad between them. Though Letterman noted, later on, that he hadn't spoken to Leno in about 25 years when they filmed it.

So, while I'm sure there was some underlying weirdness between them at social events, it seems like their beef was at least partially a myth. However, if there is any beef, it likely had to do with being in competing time slots. I'm sure now that Letterman is retiring, they'll have plenty of time to catch up and resume their old friendship. After all, there's nothing a big bowl of guacamole and some chips can't fix.

More like this
David Tennant Will Have A New Villain To Battle In His 'Doctor Who' Return
By Frances Stewart
Prince William Reveals Charlotte's Hidden Talent In Ultimate Proud Dad Moment
By El Hunt
Khloé Kardashian Set The Record Straight On A New Dating Rumor
By Grace Wehniainen
At 14, Kate Berlant Had A Wheelie Backpack & One Line In 'Lizzie McGuire'
By Samantha Rollins
Get Even More From Bustle — Sign Up For The Newsletter