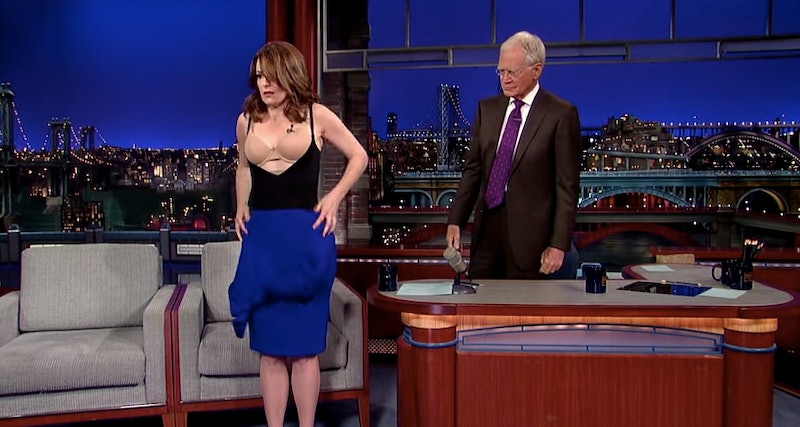 Oh Tina Fey, how much do I love you? Let me count the ways. Actually no, let's not go down that road, because we'll be all day with me listing reason after reason after reason for why I worship the ground at her feet. Instead, let's just talk about the most recent reason that my talent-crush on Fey has grown: the way Fey said goodbye to David Letterman on The Late Show Thursday night. As we all know, Letterman will step down from his hosting duties in May, after 22 years on the show, so anyone he has on in these days before his last show on May 20 will be making their final appearance. And, oh my god, did Fey make the most of that.

First of all, she said she'd been on the show 20 times, but she immediately deflated her own ego by explaining that it was because she lives nearby and "people cancel a lot." But it's also because she has a lot of respect for Letterman, which she proved by drawing attention to the beautiful dress she was wearing, and alluding to all the "contraptions" she had on under it to make herself look good. Fancy underwear and Spanx and all that good stuff that makes you feel like a whole bunch of toothpaste squeezed into a tube. Fey says she won't be dressing up like this for anybody else, so, in honor of the fact that this is her #lastdressever, she decided to honor Letterman by giving it to him. Right off her back. I love this woman.

Skip ahead through Letterman being super super nervous to unzip the back of a woman's dress on air, and Fey peeling it off to reveal some um... very special underwear indeed. She's wearing what looks like a black leotard over a flesh-toned bra and Spanx, and OH WAIT THERE'S MORE. On the front of the leotard, which probably has a much fancier fashion name, it says "Bye Dave!" and on the back, right across her butt, it says "#Last Dress Ever."

Oh man. For once, Letterman is speechless, and I gotta say, I'm feeling the same way. Just love this lady so much.