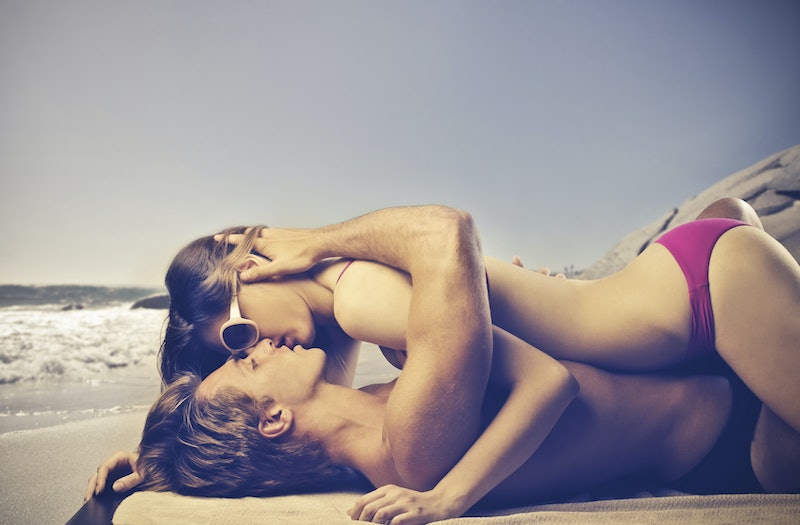 Who hasn't fantasized about doing it outside? The sand under your toes, the waves crashing in the distance as you prance around like Helena Christensen in that Chris Issak video before your partner makes sweet love to you. Or perhaps you're more of a woodland nymph and you'd rather do it doggy style while you're leaning against a tree, the scent of fresh pine wafting in the distance. Well, it’s all fine and good until the cops come and you get arrested for having sex in public. That spicy sex life you were looking for doesn’t seem so spicy anymore.

Don’t get me wrong, sex outside seems like a good idea. I'm all for doing it outside as long as you don't get caught. I think Ludacris was on to something when he rapped:

While the Dirty Birds kick for t'ree

And if you like in the club we can do it"

But getting arrested would suck big time. You may be charged with indecent exposure for showing the world your bits and pieces or lewd behavior. Lewd behavior is considered lewd whether or not you were clothed or not. So don't think you're going to talk your way out of this because no one saw your vagina.

Though the laws vary from state to state, sex in public is usually considered a misdemeanor, carrying fines of up to $1000 or even A YEAR IN JAIL! If there's anything I'm sure of, jail is NOT cute so think twice before you get you decide to "push push in the bush". Plus, I don't know about you, but I think it would be super embarrassing to be on the evening news for getting caught having sex.

1. A Church Or Temple

As sexy as you might find the sacrilegious-ness of doing the nasty in a house of worship, I'd say it's 100 percent likely you will be arrested. A couple allegedly tried this stunt at St. Patrick's Cathedral in NYC for a radio show, and needless to say the parishioners were not too pleased.

I'm gonna take a gander here and say this is probably not a good spot for the simple fact that there are cops everywhere. Unfortunately, one couple allegedly failed to notice the jail right in front of them when they decided to park in front and engage in a game of naked Twister. After causing a massive traffic jam, they got cuffed.

Unless you're ballin' and have the cash to shell out for a private beach, you might want to stay away from beaches. A Florida couple was arrested for allegedly having sex on the beach after a grandma filmed them on her camera. I'm not sure what is more shocking; the fact that they were having sex in plain view of everyone or that the grandma knew how to take a video. Get an umbrella, guys!

The idea of doing it with a doctor seems pretty sexy. However doing at a doctor's office is probably a no-no. A drunken Florida couple (again Florida?!) was arrested for allegedly hooking up on the front lawn of a pediatrician's office, causing several children to lose their eyesight. Just kidding. About the eyesight part anyway.