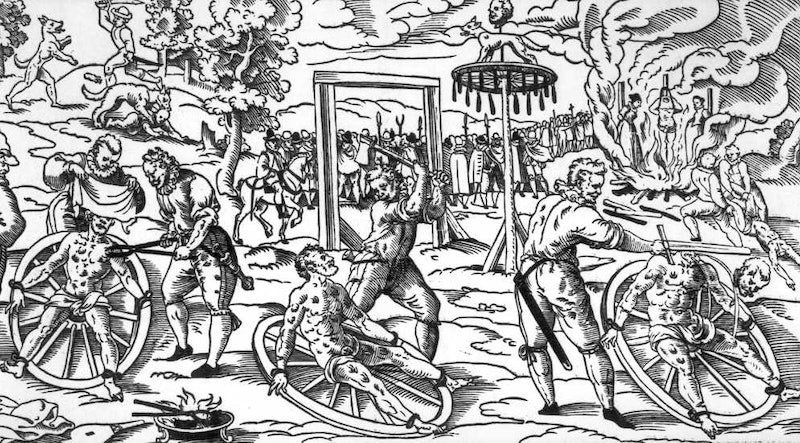 Here’s a post for all of those days that you sit back and think, “The contemporary world is horrible.” Yes, our own age is plagued by climate change, violence, inequality, and a host of other problems, but at least it’s not plagued by an actual plague, right? Our world is by no means perfect, but a quick look at the trials and tribulations of the middle ages may make you feel a bit better. The Middle Ages, also known as the medieval period, lasted in Europe from the 5th to the 15th centuries, and many aspects of this time were rough, to put it mildly.

Scholars have noted that the Middle Ages have often gotten an undeserved bad rap: Sandwiched between the fall of Rome and the start of the Renaissance period, the medieval period tends to be portrayed as a dark era in human history in which nothing good or innovative happened, a waiting period for the brilliance of the Renaissance. As Tim O’Neill writes in Slate, “the Middle Ages” describes a very long period of history that saw a number of major transformations, as well as the invention of such things as “the mechanical clock, eyeglasses, effective gunpowder weapons, and the printing press.” That said, there are still many aspects of the period that would make a contemporary person cringe, including devastating famines, disease, and a fondness for disturbingly creative torture devices. TL;DR: Be grateful that you live in the 21st century.

Read on for five awful aspects of the medieval period, and learn about just how dark the “Dark Ages” could be.

Torture was used in the medieval period as a way to extract confessions and punish criminals (sometimes prior to execution). People in this period were quite, er, creative about torture, coming up with relatively simple ways to cause pain, like the thumbscrew (which worked by slowly crushing victims’ thumbs and toes), as well as more complicated ones, like the choke pear (pictured above), which was inserted into victims’ orifices and expanded. I’ll leave you to imagine the rest.

The ingenuity that people brought toward torture in the medieval period was also extended to execution methods. While some criminals and traitors were killed in relatively quick, painless ways (with machines that resemble the guillotine, for example), others were subject to methods designed to create as much pain as possible and prolong the dying process. Hanging, drawing, and quartering, for instance, was a punishment reserved for those who had committed high treason. In this process, the victim was dragged by horse to the site of execution; he would then be hanged nearly (but not quite) to death, and then disemboweled while still alive. The victim would then be cut or pulled into four pieces, or “quartered.”

The Black Death, one of the most destructive pandemics in human history, came to Europe in the mid-1340s. It is thought that the disease – a bacterial infection often referred to as the “bubonic plague” – came to Europe via merchant ships travelling from Asia. The disease was carried by fleas who rode on the rats that commonly infested ships. In the space of a few years, the Black Death killed more than 20 million people in Europe – nearly one third of the continent’s total population.

The plague was extremely contagious and fast-acting. Victims would develop blood and pus-filled boils, as well as fever, vomiting, and other symptoms, and would usually die within a few days. People of the time had no idea what caused the disease or how it was transmitted; many saw it as proof of God’s disapproval for the sins of man. Thousands of Jews were murdered in this period in an effort to rid towns and cities of heretics, and some Christians took to extreme acts of piety, like self-flagellation, to cleanse their souls and avoide the disease.

If you were unlucky enough to get the plague or any other illness during the medieval period, doctors were not much help, and in many cases only made things worse. Doctors of the period understood the human body in terms of the four humors (phlegm, blood, yellow bile, and black bile) and believed that good health depended on a proper balance of these properties. They also relied heavily on astrology to explain physical ailments and illnesses, and turned toward both the medieval church and occult healing practices for aid. Common treatments for a variety of illness included bloodletting (pictured above) and cupping. Trepanning, a process in which a hole is drilled into a skull, was used to treat mental illness.

Europe was affected by a major famine between 1315 and 1317, though the effects lasted for nearly a decade afterward. The springs of 1315 and 1316 were unusually wet, resulting in much smaller harvests that normal. Many people starved to death or died of illnesses due to weakened immune systems caused by hunger. Millions of people – 10 to 15 percent of the total population – died from hunger or disease; there are even reports that many resorted to cannibalism, though these may be apocryphal.