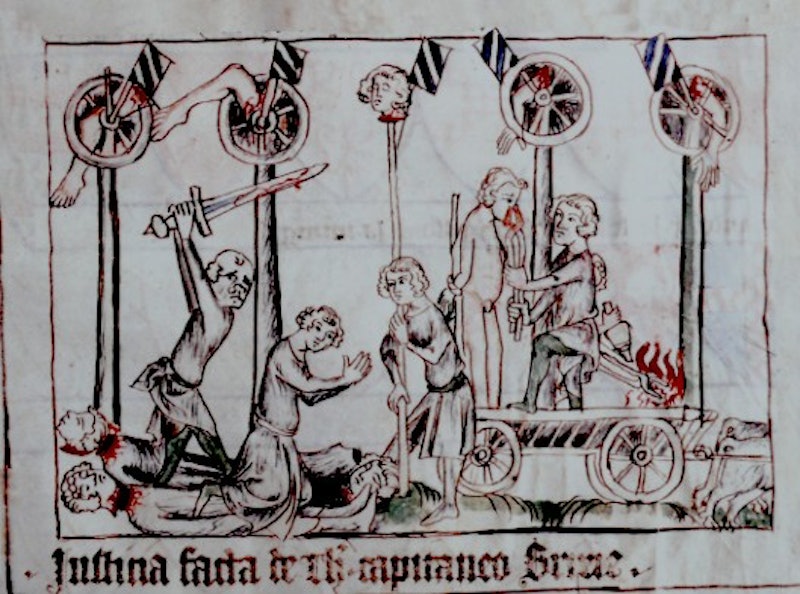 All right, so this is an article about extremely disturbing execution methods of the Middle Ages, a period that lasted in Europe from around the 5th to the 15th centuries. Be advised that the methods outlined below are truly horrific and awful, and some of you may simply not want these ideas to occupy space in your brains. That’s OK; you can go read something else. (Here’s an awesome article about puppies. You’re welcome.) But I know that many of you saw the title of this article and thought, “YES. I will click on that. Old-school torture and execution sounds fascinating.” I know, because that’s precisely the reaction I would have.

I feel like, in a perfect world, we would study these centuries-old execution methods purely as cautionary tales about the potential of human cruelty, as distasteful, but useful examples of what happens when you give people too much power over the bodies and lives of others. But the truth is, people enjoy finding out about torture methods, and murder, and the horrible things that can happen to the human body. That enjoyment, that weird feeling of simultaneous repulsion and fascination, is why we watch gratuitously gruesome forensic shows (ahem, Bones ), and it’s why people are still obsessed with Jack the Ripper 127 years after the Whitechapel Murders, and it’s why people went to see all those awful Saw movies .

Why do people (and I’m including myself here) like this stuff? Is it because, by looking at the cruelty of the Middle Ages, we somehow absolve ourselves of the violence of our own time? Does learning about archaic torture methods satisfy some deep, lizard brain desire for carnage? Are we drawn in by the transgression of physical boundaries when the body is torn apart? And does the fact that these execution methods are centuries old somehow make them approachable, or comprehensible, in a way they wouldn’t be if they were practiced today? I’M ASKING.

Read on for 7 disturbingly creative ways that people killed other people in the Middle Ages. Er … enjoy? (Is that what we’re calling it?)

In this method of execution, victims were sawn in half lengthwise, from groin to head or head to groin. If a victim was tied upside down, as in the image above, blood would stay in the head and chest, and it could take several hours for him or her to finally die.

The Judas Cradle was a torture device that looked like a pyramid on a stool. Victims would have the pointed end inserted into their orifices (anus or vagina), and then they would be pressed onto the device. The Judas Cradle would kill victims either through impalement, or through causing so much muscle and tissue damage that the victim would become septic and die.

The breaking wheel was used as a form of capital punishment during the medieval period. Victims would be strapped across the wheel, and then pummeled with iron cudgels to break their bones. After being “broken,” they would be left out to die, which could take a matter of days.

4. Burning at the Stake

Flaying people alive (stripping off their skin) is an ancient method of torture and execution that was used long past the Middle Ages. During the Middle Ages, the method was used to punish witches, criminals, and traitors.

A medieval punishment for high treason, hanging, drawing, and quartering involved having the victim first tied to a horse and dragged to the site of execution. Then he would be hanged almost to the point of death, then, while still alive, disemboweled. After burning his entrails, executioners would finally behead the victim and quarter the body (i.e., cutting or pulling it into four pieces).

The head crusher is exactly what it sounds like: a torture device that worked by crushing the skull. Used as a way to extract confessions, the crusher would slowly and painfully press the jaw and crown of the head toward each other, breaking the jaw, teeth, and facial bones and squeezing the eyes out of the sockets. If the victim wasn’t killed, he or she could nevertheless suffer from permanent bone and brain damage.

OK, so now that we are all completely disturbed, let’s take a moment to clear our minds and look at puppies:

More like this
The Guide To “Witches Stairs” & Why They’re Actually Great For Small Spaces
By Emma Garza
Neptune Retrograde 2022 Do's and Dont’s
By Brittany Beringer
Here's Your Daily Horoscope For June 29, 2022
By Mecca Woods
Your July 2022 Monthly Tarot Reading
By Jezmina Von Thiele
Get Even More From Bustle — Sign Up For The Newsletter