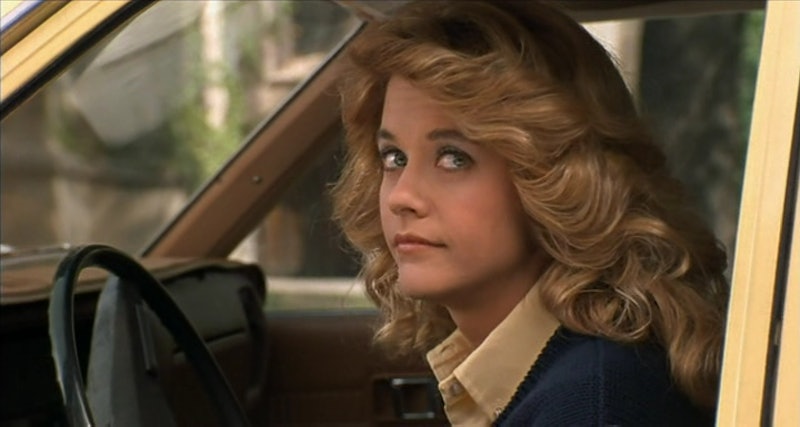 It wasn't until my late teens that I discovered the magic of Meg Ryan. And once you've been introduced, who could ever get over Meg Ryan's fashion in the many films she's starred in? Granted, it wasn't until 2001's Kate and Leopold that I fell in love with her and that she was put on my personal map of Hollywood starlets. But despite being late to the party, I've managed to catch up on her talent through the decades.

It was around that same time, though, that my then boyfriend, now husband, introduced me to a movie he had grown up watching — the classic and timeless '90s rom com Sleepless in Seattle. Sigh. This obviously led to my finally watching You've Got Mail to see her and Tom Hanks in action together once again. And then I took it way back and finally saw When Harry Met Sally, which pretty much changed all of our lives, right?

Meg Ryan was dubbed as one of "America's Sweethearts" back in the day for all her '90s film glory. And personally, I love what Bustle's own James Tison has to say about Ryan:

"If Julia Roberts was the mother of all romantic comedies in the ’90s, Meg Ryan was her cute, neurotic sister."

I don't think anyone can think of Meg Ryan without imagining her perkiest of scenes: Her reenactment of faking it in When Harry Met Sally, her crazy Christmas car-singing in Sleepless in Seattle ("Horses, horses, horses..."), her cute unawareness of who Joe Fox really is in the coffee shop of You've Got Mail.

She's without a doubt a delight in the rom com category, and her film fashion always made a direct impact on that fun and cheery disposition that she seemed to intrinsically carry. Here are just some reasons her outfits and style of yesteryear are still cause for celebration.

(In City of Angels)

(In Proof of Life)

(In You've Got Mail)

Her version of the pixie cut became a signature style for Meg Ryan in the late '90s and inspired many women everywhere to try the same look. She always rocked it effortlessly, and made her short 'do work just as femininely as her longer (and bigger) hair in her many rom-com roles. There was something so charming in that fairy-like demeanor — who wouldn't fall madly in love with her in the movies?

(Scenes from When Harry Met Sally)

I love how this particular movie spans 12 years of the characters' lives, and we get to see Sally's style transformation through those years during the film. But this outfit is my favorite because, well, look how amazingly she is wearing it! It is androgynous-chic at its finest. That hat, the bag, and gloves make the entire look seem contemporary (for the time period, at least) while at the same time borrowing from a more vintage aesthetic for an overall darling appeal.

Her Penchant For Menswear

(In You've Got Mail)

(In Kate and Leopold)

I don't know if it was just a '90s thing in general, but the ironic thing about Meg Ryan's fashion is that in almost every film I've seen her in, she's seen wearing loose-fitting dress pants or jeans, tops without plunging necklines, collared dress shirts, or knit sweaters. Despite the fact that many of the characters she played were terribly "lost" women who "just needed that love of their life" to come and rescue them.

Obviously, that script is not too uncommon for romantic comedies, and I'm not saying every one of her roles portrayed her in such a way, but there seems to be at least a move in a feminist direction via her clothing and general style. She was never that typical "bombshell" that dressed in form-fitting garments or flowing, revealing cuts. Call it old-fashioned, if you will, but I think she paved the way for women to wear menswear as their own.

(Scenes from Sleepless in Seattle)

She made the trench rain coat look less frumpy and more sleek. Again, maybe it was just the '90s, but I think we need to bring back this look paired with heels as Meg Ryan did, and work our Seattle or New York rain chic, especially in the spring and fall seasons.

(Scenes from When Harry Met Sally)

I'm sure you're getting flashbacks to your mother in the '80s. My mom, at least, rocked every one of these looks at the time. Our fascination with big hair back then is something I absolutely adore, and Ryan makes it look great without going too crazy. As opposed to some of the styles that I mentioned above, there's something very traditionally feminine about this hairstyle; but I love how she's able to pair it with, once again, clothing that isn't stereotypically "girly."

So thank you, Meg Ryan, for the glorious sartorial wonders you've been presenting us with through the decades! And here's to a lot more!

More like this
23 Times Meghan Markle Dressed Just Like Princess Diana
By Bustle UK
Bella Hadid Just Wore Y2K-Inspired Pacifier Earrings
By Natalia Perez-Gonzalez
10 Show-Stopping Manicures From The 2022 BET Awards
By Paris Giles
35 Ideas For 4th Of July Nails That Go Beyond Red, White, & Blue
By Audrey Noble
Get Even More From Bustle — Sign Up For The Newsletter