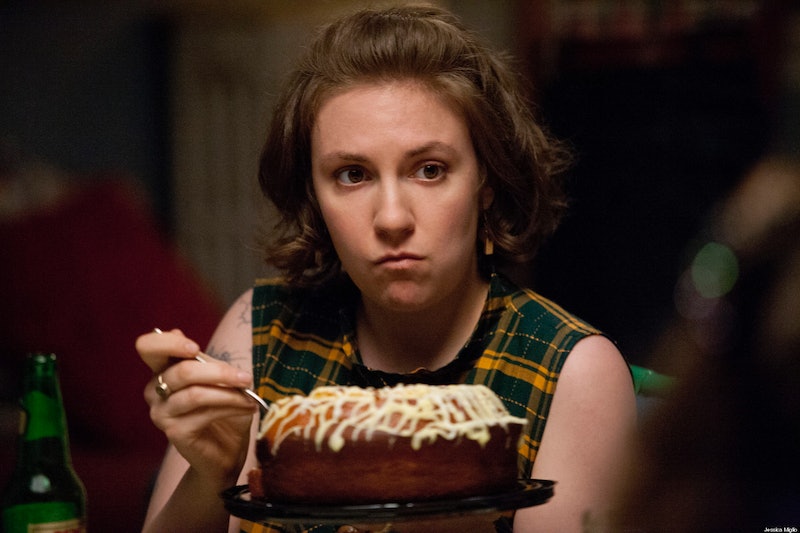 You're the friend who always has two energy bars and a smooshed-up brownie in her bag, the one who spends long car rides asking where the next Starbucks is (sometimes while still in a different Starbucks); you are the person in your social circle who is always hungry. It's kind of your thing. And yet, while it is enough of a defining characteristic of yours that your senior photo featured you holding a chicken leg (because you thought it was funny, but also because you refused to put the chicken leg down long enough for the photographer to snap a picture), your constant hunger has always been something of a mystery to you. You can't help but wonder: is something wrong if you're always hungry?

I mean, it's not like you're skipping tons of meals or something. Every day you eat breakfast, second breakfast, lunch, dinner, snacks, fourth meal, and sometimes, a unique meal of your own creation called "blunner," where up is down, madness is sanity, and waffles are used as sandwich bread. The point is, you're definitely getting enough to eat. So why are you always hungry an hour or two later?

It turns out that hunger is a lot more complicated than simply calculating how long it has been since your last meal. There are a cornucopia of non-food factors involved in when and why you feel hungry, from your body temperature to whether you feel nervous. Read on for the 10 reasons you're hungry all the time, even though you just ate — just remember, this article is BYOLEAAQ (bring your own life experience and also quesadillas).

1. You Have A Fast Metabolism

Maybe she's born with it; maybe it's the result of years of dedicated athleticism. Either way, the end result is that you're constantly hungry because you burn calories at a higher rate than the foolios around you, even when you're resting. Enjoy the results of either your hard work or having won the genetic lottery, friend, and eat an extra flauta for me.

Your hypothalamus regulates both hunger and thirst, and sometimes, it mixes up its signals. So if you've just eaten a large, well-balanced meal, and are somehow already ready to eat an entire roast chicken ten minutes later, think back on what you had to drink with your last meal. Was it coffee, alcohol, soda, or something else with a diuretic in it? Mystery solved.

Now drink some water, and save that entire chicken for for "blunner" (I've got something really crazy planned for it tonight).

I know, I know — sometimes, the idea of getting it together to eat food in the morning seems like an endeavor on par with building the Hoover Dam. But eating a solid breakfast keeps your blood sugar level for the rest of the day, and skipping breakfast specifically can cause your body to create extra ghrelin, the hormone that makes you feel hungry (which, in turn, primes your gastrointestinal tract to expect food. Which, in turn, can make you feel even hungrier). Just eat some hard-boiled eggs and be done with it!

Well, geez, who doesn't? But if you love carbs so much that you want to drive your baguette to Vegas and marry it before the eyes of God and the Nevada State Gaming Commission, that could be why no matter how much you eat, you never quite feel satisfied. Simple carbohydrates — i.e. the stuff that makes cookies, cheddar crackers, and croissants taste amazing — can cause your blood sugar to rise and then crash; which then triggers a craving for more simple carbs.

Bizarre but true: swimming in a cold pool causes the blood vessels in your skin to restrict your blood flow and lowers your overall body temperature. This, in turn, can send signals to your brain that you're cold, hungry, and need to eat now now now. But if the extremely real phenomenon of "swim snacking" bugs you, there are two pretty easy solutions: swim in a warmer pool, or just making sure to take a walk and warm your body up after you get out of the pool (but before you bust into your emergency Pringles).

As anyone who's ever suffered through a night of crappy sleep and then walked past a taco truck will tell you, sleep deprivation can make you feel absolutely ravenous in a way that can have you question your belief in a higher power. I mean, what kind of God would make you genuinely need five tacos before 11 a.m.? Indeed, sleep deprivation can mess up your levels of ghrelin and leptin — two hormones that regulate your sense of hunger, leaving you cut off from your body's actual dietary needs.

Plus, the sheer, dead-eyed exhaustion you feel after a night of watching the clock and pondering that one time you ripped your pants during an all-school assembly in junior high can lead your body to crave all the sugar and carbs it can find — when you're exhausted, your body is desperately looking for any material that it can put in your mouth to make your blood sugar levels jump and keep you standing upright.

7. You Are Freaking Out

Back in the olden days, when we spent most of our time running from predatory animals and running taste-tests on different kinds of savannah grass, the fight-or-flight response made a lot of sense. Hey, if you're running into tigers every day, it's good to have a game plan, right?

But today, most of us spend comparatively little time fleeing from large mammals — and yet our fight-or-flight response, including the element that increases our hunger in order to help us have the most energy possible, remains unchanged. Since we mostly engage with our fight-or-flight response nowadays while getting into YouTube comment flame wars or having a panic attack at Ruby Tuesday's, this is not very helpful.

8. You Have An Overactive Thyroid

An overactive thyroid is one of those diseases that many of us think don't really sound bad on paper. I mean, increased metabolism? Where do I sign up for this "disease"?! But in reality, an overactive thyroid (also known as "hyperthyroidism") is about as far as you can get from a fun, no-strings-attached pass to Fast Metabolism City.

Hyperthyroidism can cause problems from shaking hands and dry or bulging eyes to insomnia, fatigue, and frequent diarrhea. And a speeded-up thyroid can also be a sign of more serious health issues, like the autoimmune disorder Graves disease, which can lead to irregular heartbeat, vision impairment, and other problems that make it hard to live your life (in fact, it's the health problem that forced Missy Elliott to step back her recording career in the late '00s). So if your sudden hunger is paired with any of these symptoms, get yourself to the doctor — hyperthyroidism can usually be easily treated with medication.

If your sudden hunger has shown up with some unsavory friends — like blurry vision, the frequent need to urinate, or a thirst you can't quench, no matter how much water you chug — it may be time to talk to your doctor about getting tested for diabetes. Diabetes can have some extremely serious health consequences if left untreated; the disease can cause everything from nerve damage to vision loss, and can increase your odds of having a stroke or heart attack. So if you think you could be experiencing any possible symptoms, call your doctor ASAP — even if you're wrong, it's better to know.

10. You're On Hunger-Inducing Meds

If you think that your starting on a new med like Zoloft or prednisone seemed to coincide with a sudden uptick in your desire to eat a cheese blintz every hour on the hour, it is not just your imagination. There are a wide variety of medications that can impact appetite — some increasing it, some taking it away. If you find that your meds are turning you into someone who thinks that competitive hot dog eating might be a fun job, talk to your doctor.

Ugh, writing this article was exhausting. Can I have some of your smooshed purse brownie?