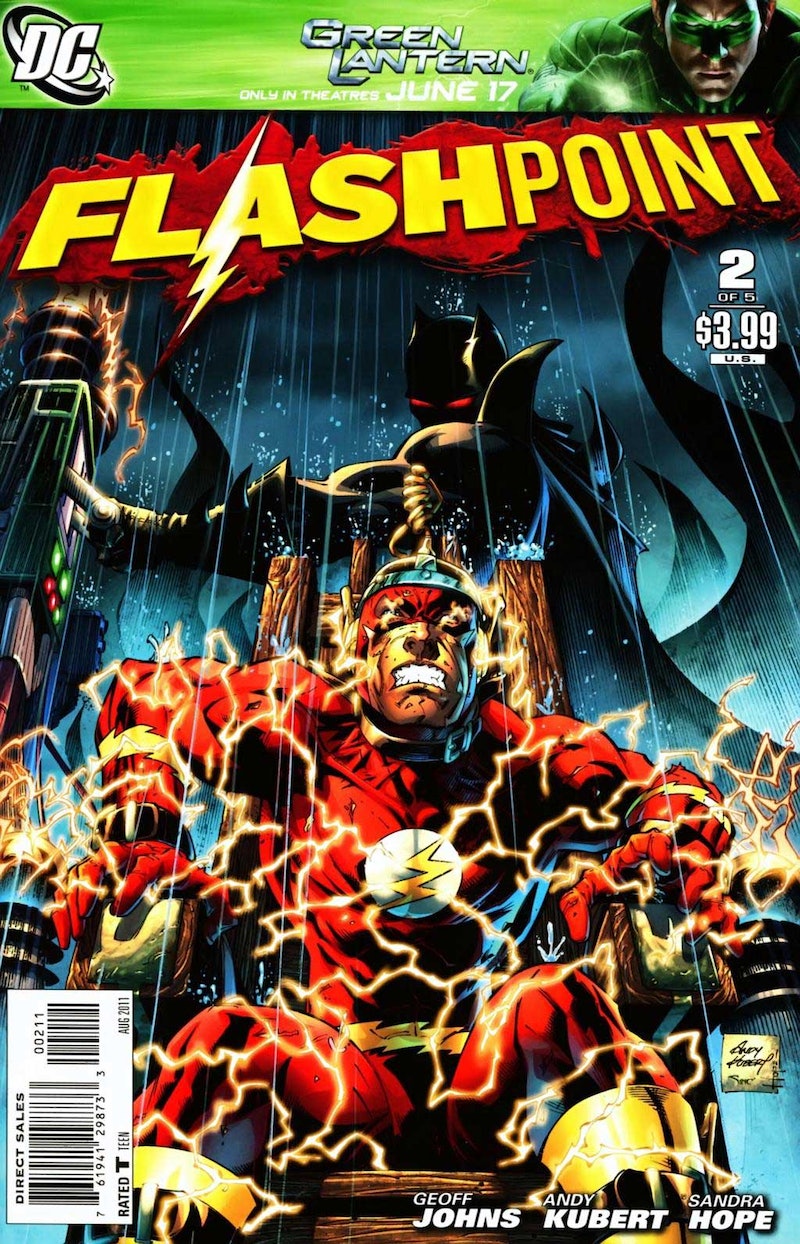 The end of the first season of The Flash was completely bonkers — there's no other word to describe it. So first, big round of applause for everyone behind The Flash, because this has been one amazing, crazy ride. But now it's time to look to Season 2 and what the events of the season finale, "Fast Enough," set up. Barry disappeared into a wormhole, which leads me to believe that there's a high chance we'll see elements of DC Comics' Flashpoint in Season 2 of The Flash . Are you ready for this?

The Flash basically sets up a few different realities over the course of "Fast Enough," as Barry comes and goes through one of them, and Wells even tells him that there are other realities out there. Just thinking about how many there could be makes my head hurt, but I hope that one we'll get to see is Flashpoint.

The story of Flashpoint is essentially that Barry IS able to alter the past, and big events. One of the biggest examples of this is his mom being alive. In the comics, Barry basically creates a reality where it's Opposite Day all the time. Heroes are now villains, and villains like Captain Cold are hailed as heroes. So yes, I think it's interesting that we quickly saw Leonard Snart at the very end of the episode, staring up at the wormhole.

I thought that this season finale was going to definitively set up that storyline, and while it didn't right off the bat, I believe it's still coming. Barry may not have saved his mom when he went to the past, instead saying a heartfelt goodbye (still wiping the tears away from my eyes over that moment, thanks Flash), but going back in time could still have altered events. If not the events of the immediate present, then at least those of the more distant future that we've seen glimpses of.

Then, there's that wormhole we see form at the end of the episode. As Martin Stein calmly explains, it's going to suck in all of Central City, and then the world, unless they can close it up. Who's fast enough to close it up? The Flash, of course. So off Barry goes, running as fast as he can, and then into the wormhole. That's certainly going to have repercussions.

When Barry comes out of the wormhole, what will everything be like? What version of Barry will we see come out? From what the episode sets up, there are multiple Barry Allens out there in different timelines. There might even be an infinite number of Barrys out there. It's all very complicated, but that doesn't make it any less exciting. The point is, Barry entering that wormhole could change everything, and usher in the timeline found in Flashpoint. Now we have all summer to try and figure out just what that means for Barry and his team.